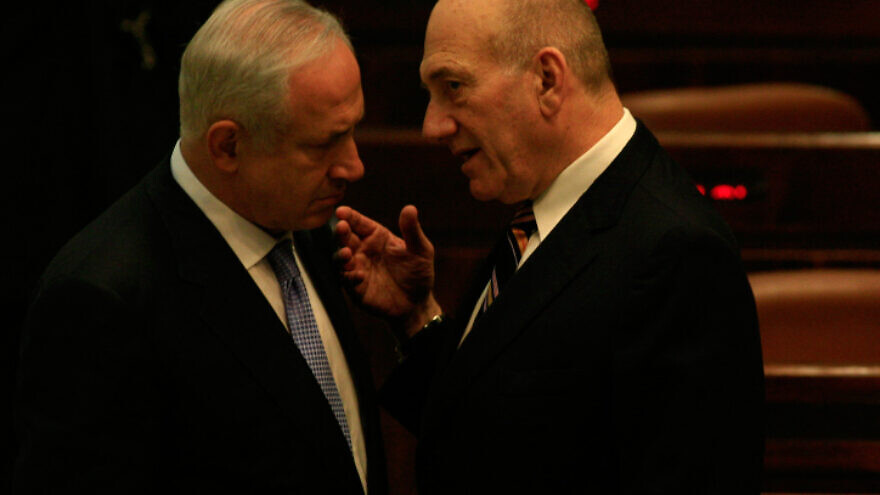 Outgoing Israeli Prime Minister Ehud Olmert speaks to his successor, Benjamin Netanyahu, on the night of his inauguration at the Knesset in Jerusalem. March 31, 2009. Photo by Yossi Zamir/Flash90.
Spread the word.
Help JNS grow!
Share now:

Olmert was ordered to pay to Netanyahu, his wife Sara and son Yair just over $28,000—$18,000 in damages and the rest to cover legal costs—for calling them mentally ill.

“What is irreparable is the mental illness of the prime minister [Netanyahu], his wife and his son,” the former premier said last year in an interview with Democrat TV, according to the report.

The Netanyahus filed a defamation suit in May 2021 after Olmert refused to apologize, seeking nearly $250,000 in damages.

Olmert had argued that his comments were true and thus protected by Israel’s defamation law, which states that an individual is not liable for disparaging another person if it is done in good faith.

In his decision, Judge Amit Yariv noted that, “Associating a certain behavior with this or that disease is a medical matter, and the court cannot determine this,” said the reports.

“Even if I assumed that the witnesses’ statements are true, it is impossible to derive a diagnosis of mental illness from them,” Yariv continued, adding: “There is no doubt that even today, despite the efforts of professionals, mental illness holds a negative connotation in society, which imposes a stigma on the patients. Is it justified? There is no doubt that it is not.”

Olmert served as prime minister between 2006 and 2009, before being convicted of fraud in 2014 and serving 16 months of a 27-month prison sentence.