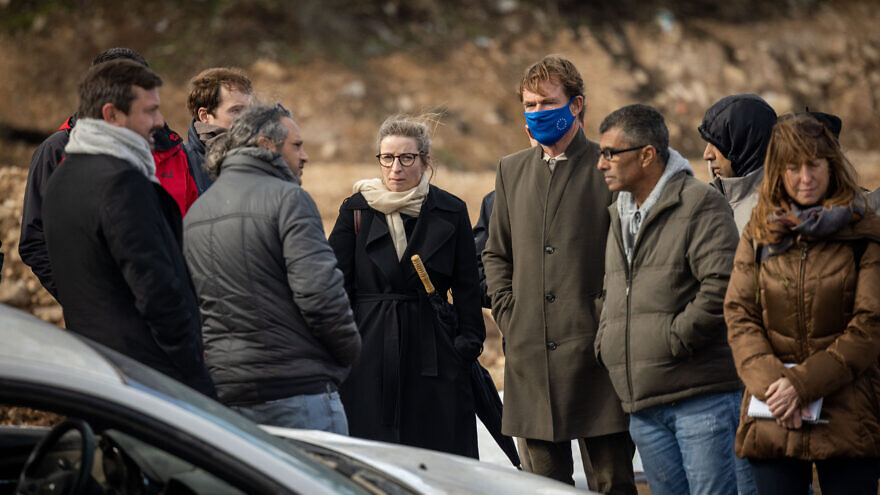 (January 10, 2022 / JNS) The United States and some European nations continue to demonstrate an obsession with Israeli “settlements” and isolated incidents by small groups of radical right-wing Israelis, mostly wayward youths, while completely ignoring the much larger issue of Palestinian violence, incitement and terrorism.

This obsession was made even clearer during a routine meeting several weeks ago at Israel’s Ministry of Foreign Affairs between diplomats and ambassadors from 16 European countries and Aliza Bin Noun, the director of the European Affairs Department.

According to a report on the Israeli Walla news site, the European representatives reportedly presented Bin Noun with a lengthy letter of protest over settler violence against Palestinians, settlement construction near Ma’ale Adumim and in eastern Jerusalem’s Givat Hamatos neighborhood, and the general situation in “Area C” in Judea and Samaria, more commonly known as the West Bank.

Bin Noun, however, refused to passively accept what she deemed to be their misguided obsession with the wrong issues.

“You are pissing me off,” she told them. “After everything the new Israeli government has been doing for the Palestinians, you come to complain?”

‘Respond clearly, even if response is not pleasant to European ear’

According to Ministry of Foreign Affairs spokesman Lior Hayat, “dialogue with the Europeans on a variety of issues on the agenda includes the promotion of cooperation on many and varied issues along with disagreements.”

Hayat said that while Israel is seeing a warming in relations with European nations, at the same time, their positions and claims “are sometimes presented in ways that are not acceptable to us, and when that happens, it is correct to respond to them clearly and sharply even if our response is not pleasant to the European ear.”

The European envoys’ complaints become even more outrageous when considering a recent study commissioned by B’nai B’rith International that found that the European Union has not done enough to ensure that funding to the Palestinian Authority does not support incitement to violence and human-rights violations.

The British embassy in Israel declined to comment on the record for this article. It also declined to clarify whether the same envoys also raised the issues of Palestinian violence, incitement and terrorism.

Adding to the outrageousness of the American obsession with settlements, recent headlines include rumors that U.S. President Joe Biden is ignoring Israeli Prime Minister Naftali Bennett’s request for a phone conversation because the president is allegedly upset over the settlement issue.

Danielle Pletka, a senior fellow at the American Enterprise Institute, told JNS that she believes Biden’s alleged refusal to answer Bennett’s phone calls actually has “more to do with the difficulty of briefing Biden to stay on message than antipathy towards Israel.”

Taking it further, Dore Gold, president of the Jerusalem Center for Public Affairs, believes that “the obsession isn’t with settlements; it’s with Israel.”

As Gold explained to JNS, the legal basis of European objections to settlement activity that appears in U.N. resolutions is the 1949 Fourth Geneva Convention, which forbids an occupying power from evicting the existing population or forcibly transferring its own population into the occupied territory.

Gold highlighted the international community’s double standard with regard to the convention.

Gold noted as an example that when Turkey occupied northern Cyprus, there was a massive sale of properties there to Europeans who wanted a cheap vacation home. These cases came up in European courts, particularly in Britain, but the U.N. Human Rights Council ignored it.

The one case, he said, “that really boils my blood” is what has been going on in the last decade in Syria.

Pro-Iranian Shi’ite militias there have evicted thousands of Syrian Sunnis in order to change the demographic balance. There has also been an attempt to allow some of these families that have come from Afghanistan, Pakistan and elsewhere to settle in the vacated homes.

Gold pointed to Khan al-Ahmar, a Bedouin outpost situated on the main highway connecting Jerusalem to the Jordan Valley, and recognized as illegal by Israel’s Supreme Court as a potential security risk if more such outposts are established.

When he was director-general of the Ministry of Foreign Affairs, Gold met with German officials over assistance to Palestinians in Judea and Samaria, and, according to his own words, “made a very strong point” that if Khal al-Ahmar is allowed to remain and other similar outposts are established, hundreds of Israeli families that travel on that road will be at risk.

Still, the Israeli government is not implementing the removal of Khan al-Ahmar, allegedly for fear of an international backlash.

Gold said he told the German ministry officials to recognize that if Israeli families are killed on this road after Germany insisted that Palestinian construction in “Area C” is legal, they share responsibility in what happens.

“They didn’t brush it off,” he said. “They very much internalized the message.”

While they may agree on the point, the Germans and other Europeans, along with the Americans, still focus on Israel while ignoring real violations of the Fourth Geneva Convention elsewhere in the world.

‘They cannot revise their basic assumptions’

Professor Eytan Gilboa, an expert on U.S.-Israel relations at Bar-Ilan University and a senior fellow at the Jerusalem Institute for Strategy and Security, told JNS that successive U.S. administrations have identified the settlement issue as the fundamental obstacle to peacemaking.

Former U.S. ambassadors to Israel like Martin Indyk and Daniel Kurtzer, among many other officials and diplomats who have made a career in Israeli-Palestinian peacemaking, “are prisoners of their own false conception and understanding of what are the main obstacles and how to overcome them,” said Gilboa. “They cannot revise their basic beliefs and assumptions because this would require an admission of their own failures.”

“Many in this administration still believe that the No. 1 obstacle is the settlements,” he said. “Instead of focusing on all the obstacles and identifying the most important ones, they are singling out the settlement issue and defining it as the most critical one.”

He also noted that because many Biden administration officials view Palestinian violence to be a result of Israeli settlements and the so-called Israeli occupation, “they seem to be tolerant of Palestinian violence, which is much more serious, and they are much more critical of settler violence.”

But according to Gilboa, the issue of settlements has never been the main obstacle. Rather, he said, it’s the Palestinian insistence on the so-called “Right of Return” that has been problematic to peace since this would mean the elimination of the Jewish state.

“American policymakers and mediators have ignored this, and they became obsessed with the settlement issue,” he said. “This reached a climax in the last weeks of [former U.S. President Barack] Obama’s presidency when he allowed the U.N. Security Council to pass a resolution defining settlements as illegal. Not only that, but Obama was behind the resolution.”

Former Secretary of State Mike Pompeo reversed this decision in 2019 when he said the United States “will no longer recognize Israeli settlements as per se inconsistent with international law.”

Gilboa placed the issue in a historical context, noting that in 2009, P.A. leader Mahmoud Abbas demanded that Israel recognize the two-state solution and freeze settlements—both of which former prime minister and current opposition leader Benjamin Netanyahu did. And yet, Abbas still did not come to the table.

“This proves that settlements have never been the issue,” said Gilboa.

He also lamented that Israeli policymakers “don’t seem to make an issue of this in meetings,” though Bin Noun may be the exception.

By allowing the Americans and Europeans to focus their obsession on settlements—and to ignore the real issue, such as Palestinian terrorism, incitement and the insistence on the “right of return”—Gilboa said Israel is “missing opportunities” to change the narrative.

Foreign obsession with Israel and the settlements is not going away, “but it is imperative that Israel get its truth out,” said Gold. “The Fourth Geneva Convention does not apply. Israel is in the right here.”