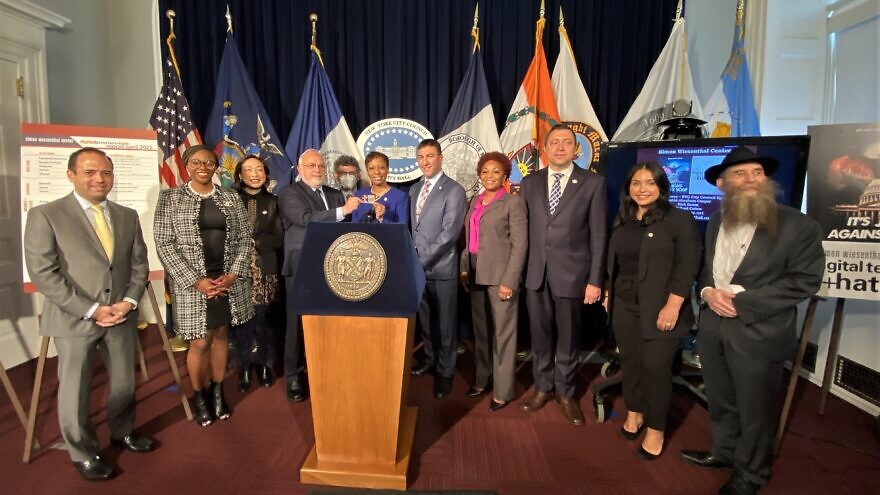 (May 2, 2022 / JNS) While New York City is seeing a new surge of Jew-hatred, the breeding ground for the violent ideology behind it is stewing online. And social media and gaming sites are receiving failing grades in their efforts—or lack thereof—to stop it.

“The release of the 27th annual Digital Terrorism Report demonstrates that hate spreads online in social-media and gaming platforms, which often reaches and influences our young people,” Adams said. “We must continue to root out hate in all of its forms to make our communities safer.”

“We are seeing a significant rise in anti-Semitic activity. The ADL just released a report saying that violent incidents are up 200% in the city, that acts in schools are up over 100%, that there is an increase on college campuses,” City Council member Eric Dinowitz, the chair of the council’s Jewish Caucus, told JNS.

It comes at a time of unprecedented Holocaust denial and distortion on global platforms by Nazis, racists and conspiracy theorists.

“I was heartened to see the full support given by the City Council, not just from Jewish members, but from black, Hispanic, Asian and all representatives. It’s a sign that we’re not in this fight alone,” Rabbi Abraham Cooper, associate dean and director of global social action at the Simon Wiesenthal Center (SWC), told JNS.

This year’s Digital Terrorism Report exposes widespread Russian disinformation and fake news sites connected to the invasion of Ukraine, along with conspiracy theories; virulent anti-Semitic, racist and xenophobic hate messaging; the targeting of minority communities; and, perhaps most concerningly, the infiltration of children’s gaming platforms by neo-Nazis and other extremists.

Cooper pointed to SWC’s “Tools for Tolerance” program training, with cutting-edge courses on how to identify the varied strains of anti-Semitism festering across the globe and on social media, as an asset for law enforcement and the general public. Notably, SWC has partnered with the New York City Council over the past few years to deliver workshops on combating digital hate to thousands of middle- and high school students. 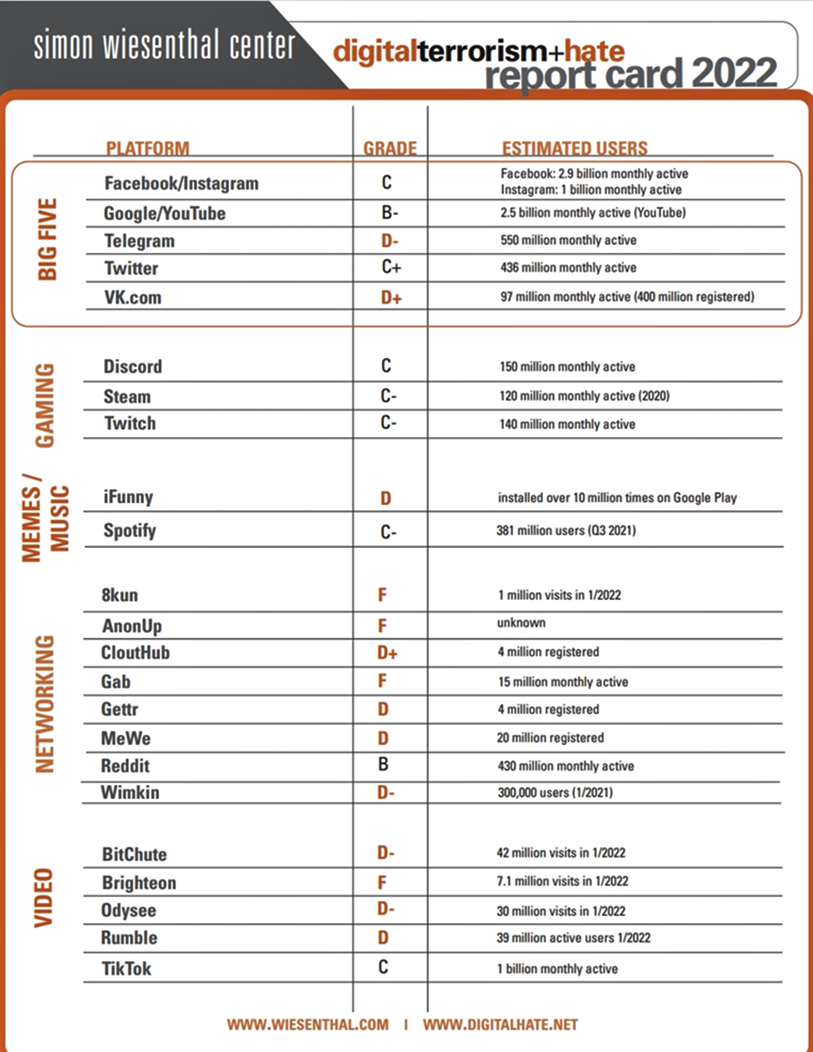 “The hate is reaching a new generation. The battleground is online, and that’s where our children are. We’ve got to hold these platforms accountable and to educate parents on what they should be looking for,” said Cooper, who credited Adams, the council’s first black speaker, for her leadership on the issue.

The City Council is calling on the mayor’s office to pledge $5 million for community hate-crime prevention and response work.

Dinowitz told JNS that the council is sponsoring a number of initiatives that address hate, and is pushing for more funding for community organizations for their hate-crime prevention and response work. He said he and a non-Jewish member of the council introduced a resolution calling on the state to pass legislation to review Holocaust education in the public schools, while another resolution supports the creation of a Jewish Heritage Day in the city. He also noted that Council Member Nantasha Williams (District 27 in Queens) is holding a hearing on hate crimes in the city and is reaching out to Jewish organizations to testify.

“I think we need to lean into education in terms of digital literacy, understanding what is fact and opinion, and what is hateful. But also, how it relates to what we are teaching in school about the Holocaust, anti-Semitism, about how we’re bringing communities together to learn about each other’s cultures. Because ultimately, in the absence of these interactions, you’re going to have the hateful rhetoric online take hold,” he said.

Adams says the Jewish community in New York is still the most targeted for hate crimes, which can be fueled by misinformation and anti-Semitism, as well as conspiracy theories online.

“Across the country and in our city, communities have sadly witnessed and experienced the alarming uptick in hate crimes and violence,” said Adams at last week’s event. “When hate content is disseminated and allowed to spread in mainstream online platforms, it irresponsibly allows for hate to grow and turn into potential violent action.”

“I thank Rabbi Cooper and the Simon Wiesenthal Center for their work to shine a light on digital hate, and I look forward to continued partnerships with our diverse communities to support holistic safety solutions,” she said.

‘It is not normal to perpetuate stereotypes’

Cooper said the SWC report names and shames social networks and gaming sites for failing to prevent online hate before it manifests into violence. Grades range from a C for Facebook, Instagram and TikTok to an F for Gab and Brighteon—two lesser-known networking and video sites that, nevertheless, still have millions of users.

Other outlets such as the popular Roblox gaming platform are included, but not rated, in the 2021 report.

As for Dinowitz, he explained that “it’s important that the digital aspect of anti-Semitism was discussed. It’s much easier to see a video of violence and have that go through Twitter. It’s pretty easy to see a swastika spray-painted on the side of a highway. It’s a little more insidious when it’s a 9-year-old playing Roblox talking to another young kid, and those messages are coming through. It’s a little more insidious when someone is alone on TikTok looking at videos and seeing anti-Semitic videos and propaganda, which leans into anti-Semitic tropes.”

“That’s why,” he said, “this support and this work is so important because it’s harder to identify very often, as this type of hate lives below the surface.”

The networking site Reddit received a B on the report card, while Google/YouTube got a B-, which were the best grades this year. Reddit was the only networking platform to have received a grade above D. The report card ranked 23 of the most high-profile, popular sites in gaming, memes/music, networking and video, along with the Big Five of Facebook/Instagram (C), Google/YouTube (B-), Telegram (D-), Twitter (C+) and VK.com (D+).

“It is really important that we continue to elevate this issue because we cannot become complacent,” said Dinowitz. “We cannot sit on the sidelines. There is no such thing as an innocent bystander. We must call out anti-Semitism each and every time.”