(March 9, 2021 / FLAME) When it comes to reporting or commenting on the State of Israel, The New York Times, America’s so-called “paper of record,” has become more akin to an anti-Zionist advocacy organization than an unbiased news outlet, sometimes even descending into outright anti-Semitism.

According to David Bernstein, president and CEO of the Jewish Council for Public Affairs, the Times holds “a decided institutional bias” against Israel. This was after his organization researched 107 editorials on Israel and Jews published in the Times since 2016.

The situation has become so extreme that opinion editor Bari Weiss, one of the few openly Zionist voices employed by the Times in recent years, felt forced to resign in July 2020 because of harassment. According to Weiss, her colleagues called her a “Nazi” and “racist,” and intimated that she wrote too many “Jewish stories.”

Apparently, though Jews are by far the foremost victims of hate crimes in the United States, enough is enough at the Times with Jewish this and Jewish that.

While in the past the Times has allowed some nuanced voices to be heard, including those of William Safire and Abe Rosenthal, in recent years, all pretense has been dropped.

The Committee for Accuracy in Middle East Reporting in America (CAMERA) has long chronicled the Times’s bias against Israel. In a study undertaken in 2011, CAMERA found a “disproportionate, continuous, embedded indictment of Israel that dominates both news and commentary sections. Israeli views are downplayed while Palestinian perspectives, especially criticism of Israel, are amplified and even promoted.”

The net effect, states the report, “is an overarching message, woven into the fabric of NYT coverage, of Israeli fault and responsibility for the conflict.”

Two of the authors of that study, senior CAMERA analysts Ricki Hollander and Gilead Ini, explained the paper’s tactics: “Without employing the type of crude incitement against Israelis that is rampant in Palestinian society, the NYT poisons the public’s mind against Israel by shaping the perception of the Jewish state as responsible for many, if not most, of the region’s ills.”

It achieves this, the paper states, by employing “double standards in reporting about Israel versus her enemies and recounting only half the story.” In this manner, the authors explain, the Times “sanitizes the role of Israel’s adversaries, including terrorist organizations, and obsessively indicts Israel at every turn.”

In April 2019, the Times’s coverage of Israel turned into naked and open anti-Semitism. The paper published a cartoon of U.S. President Donald Trump and Israeli Prime Minister Benjamin Netanyahu, with the latter portrayed as a guide dog with a Star of David on his collar, leading a blind, skullcap-sporting Trump. Only after massive outrage did the NYT apologize for an image, which “included anti-Semitic tropes,” calling its publication an “error of judgment.” 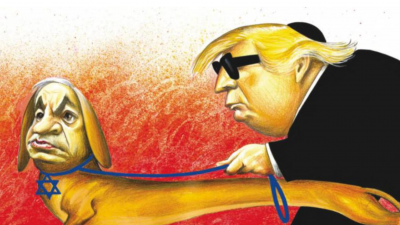 A controversial cartoon published by “The New York Times” international edition on the last day of Passover, April 25, 2019. Credit: Courtesy.

This event led to greater interest in the general workings of The New York Times among Jews and pro-Israel voices. JCPA’s Bernstein wrote about a conversation he had with a friend who was a long-time subscriber to the paper: “The cartoon confirmed his suspicion that the Times’s culture is fundamentally hostile toward Jews and Israel.” Bernstein wrote a letter to the Times, signed by scores of national and local Jewish groups, excoriating the newspaper for publishing an inflammatory and hateful cartoon and demanding a meeting.

During his organization’s research, he found that the NYT editorials were almost uniformly critical of Israeli government policy. In fact, not one editorial had an overall positive stance on Israel. The majority upbraided the Israeli government for lack of progress on a two-state solution, the settlements and anti-democratic legislation.

In recent months, the Times has outdone itself, running op-eds by numerous figures who envision a world without the State of Israel in its current form. In July of last year, the paper ran a column by Peter Beinart titled, “I No Longer Believe in a Jewish State.” In it, Beinart called for the elimination of the State of Israel and attacked Zionism, the belief in the right of the Jewish people to self-determination,

While Beinart has long described himself as a “liberal Zionist,” it is clear this has always been a fig leaf for more sinister views. As global communications director for the American Jewish Committee (AJC), Avi Mayer tweeted in response to the article, “Let’s be clear: you’re no friend of the Jews if you deny us our right to self-determination and you’re not a liberal Zionist if you want Israel to disappear.”

Indeed, denial of Israel’s right to exist as a Jewish state is recognized by most Jewish organizations, including Facts and Logic About the Middle East, as outright anti-Semitism.

While some might argue that an op-ed writer’s views are not indicative or reflective of a paper’s values, three months after writing his outrageous screed, Beinart was handed a position at the Times as a contributing opinion writer. In addition, only a few weeks ago, the Times again allowed a piece decrying the very concept of Israel as a sovereign Jewish state. In “Want Israeli-Palestinian Peace? Try Confederation,” Bernard Avishai and Sam Bahour urged a one-state solution. These are just two recent examples of the high visibility the Times provides to those who want to see an end to the State of Israel.

One would be hard-pressed to find anything in the Times (or most any publication) comparable to this about any other sovereign state in the world. However, calling into question the future of the world’s only Jewish state is something the Times’ editorial team obviously enjoys seeing on its pages.

The New York Times was once considered one of the most reputable news organizations in the world. Thus, what it writes matters to millions of people. Most readers assume its reporting is accurate and its editorials unbiased. However, that is plainly false, and its frequent attacks on the Jewish state have become so unbalanced, they have descended into anti-Semitism and allowed enemies who seek Israel’s imminent demise a national platform with which to express their views.

The Times certainly no longer deserves to be considered anyone’s “paper of record” or even respected by anyone who values the truth.

James Sinkinson is president of Facts and Logic About the Middle East (FLAME), which publishes educational messages to correct lies and misperceptions about Israel and its relationship to the United States.