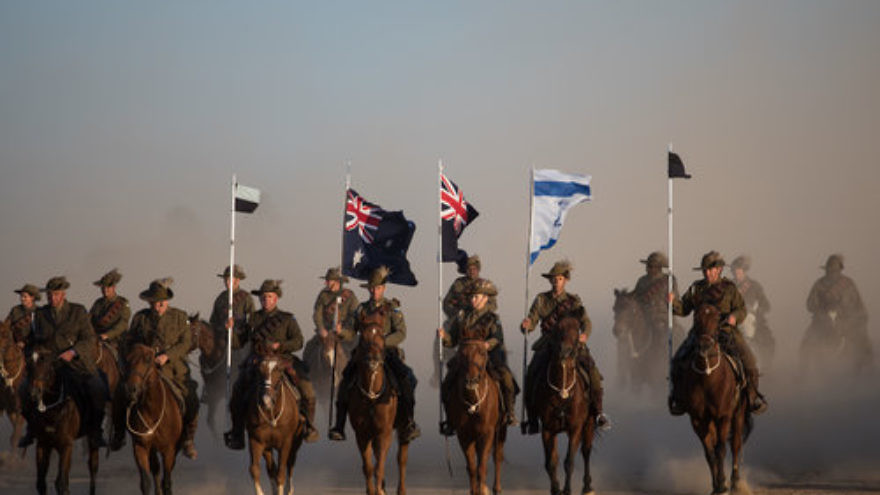 On Oct. 31, horse riders from Australia and New Zealand participate in a World War I reenactment at Israel’s Be’er Sheva River National Park, as part of events commemorating the 100th anniversary of the liberation of Be’er Sheva by the Australian and New Zealand Army Corps. Credit: Hadas Parush/Flash90.
Republish this article
999 WORDS
Spread the word.
Help JNS grow!
Share now:

(November 2, 2017 / JNS) While November 2017 marks the 100th anniversary of the much-discussed Balfour Declaration, which helped pave the way for the modern state of Israel, another important centennial—for the World War I Battle of Be’er Sheva—was also marked this week by the leaders of Israel, Australia and New Zealand.

For citizens of all three young democracies, the pivotal battle is seen as playing a major role in shaping not only the future of Israel, by setting the stage for the implementation of the Balfour Declaration through the defeat of the Ottoman Empire, but also for the national identities of Australia and New Zealand, who were part of the British Empire at the time.

“We are here standing in the city of Abraham,” Israeli Prime Minister Benjamin Netanyahu told a gathering of leaders in Be’er Sheva’s Commonwealth War Graves Cemetery. “Four-thousand years ago, our forefathers came here. Now, because of that day a hundred years ago, you see the modern city of Be’er Sheva, with the cyber headquarters, with the future in our hands. We have peace, prosperity and security, but it was made possible because of those heroes.”

The ceremony in Be’er Sheva included military reenactments and was attended by a wide array of dignitaries and officials from all three countries, in an unprecedented showing of historical bonds and present-day unity.

“Had the Ottoman rule in Palestine and Syria not been overthrown by the Australians and the New Zealanders, the Balfour Declaration would have been empty words,” Australian Prime Minister Malcolm Turnbull said, referencing the pivotal document—issued only a few days after the battle—in which the British government stated that it would “view with favor the establishment in Palestine of a national home for the Jewish people.”

Jeremy Jones, director of international affairs for the Australia/Israel & Jewish Affairs Council (AIJAC), told JNS.org that the Be’er Sheva battle “was essential for the eventual British Mandate for Palestine and the emergence of the modern state of Israel. For Australians, the battle has been inspirational for generations. [They] see the battle as emblematic of courage, ingenuity, creativity and independence of thought and action.”

Paul Moon, a professor of history at Auckland University of Technology and co-director of the Israel Institute of New Zealand, said that while his country’s participation in the Battle of Be’er Sheva is less well-known than major World War I battles like Gallipoli, it does highlight the common bond between Israel and New Zealand, two “small, vibrant democracies which cherish individual liberties, and which have a history that has often intersected.”

“Apart from its role in liberating parts of [modern-day] Israel from occupation by the Ottoman Empire in 1917, New Zealand supported the British Mandate for Palestine in 1922, and in 1949 backed the United Nations’s recognition of the state of Israel,” he told JNS.org.

Building relations down under

Beyond the historical connections, the visit to Israel by leaders from Australia and New Zealand came amid Netanyahu’s current quest to build stronger bonds with non-traditional allies outside of Europe and North America.

Prior to the Be’er Sheva event, Netanyahu and Australia’s Turnbull, along with many senior government officials, met in Jerusalem to sign a memorandum of understanding enabling more cooperation between the two countries’ defense industries, including the potential for increased exports. They also pledged to bolster their cooperation on cybersecurity.

“We have a vital interest in working more closely and intensely together to keep our people safe from terrorism and from the use of the internet,” Turnbull said.

AIJAC’s Jones said that the high-level meetings between Israeli and Australian officials showed an atmosphere of “genuine and mature friendship.”

“Prime Minister Turnbull repeatedly stressed that geography no longer was as important as it had once been, given modern communications technology and the spread of ideologies which are global in their outlook,” he said. “Israelis and Australians consistently said the relationship between the countries, in cybersecurity, counter-terrorism and other areas, is very healthy, honest, transparent and mutually beneficial.”

Israel and the Kiwis ‘move forward’

Netanyahu also met with New Zealand Governor-General Patsy Reddy as part of the first-ever visit to Israel by that officeholder.

The two countries signed a major aviation services agreement intended to establish air links—including direct routes between Israel and New Zealand, the right to fly in each other’s airspace, and stopover landing rights.

“The signing of the aviation agreement between New Zealand and Israel is a positive step toward closer ties and indicates a willingness to move forward, beyond the bias New Zealand showed against Israel at the United Nations last year,” David Cumin, the other co-director of the Israel Institute of New Zealand, told JNS.org, referencing his country’s co-sponsorship of December 2016’s U.N. Security Council Resolution 2334, which criticized Israel’s settlement enterprise and led to the Jewish state pulling its ambassador from the country.

Stephen Goodman, president of the New Zealand Jewish Council, called Resolution 2334 a “bump on the road” in bilateral relations that have historically been “very good.”

Cumin said that New Zealand’s co-sponsoring of the measure, alongside countries like Malaysia, Senegal and Venezuela, served as a “wake-up call for Israel supporters in New Zealand and fair-minded Kiwis” to take action.

Goodman explained that New Zealand’s recently departed government worked hard to restore relations with Israel, and that he expects the new Labour party-led government of Prime Minister Jacinda Ardern to continue that path.

“With the new Labour-led government, we have a deputy prime minister and minister of foreign affairs, Hon. Winston Peters, who has for a long time been in support of Israel,” he said. “He publicly criticized the sponsorship of the U.N. resolution and has for some time been a member of the New Zealand ‘Parliamentary Friends of Israel’ group.”

“As such,” added Goodman, “we hope that bilateral relations with Israel will continue to improve, and the aviation deal signed between the two countries is an example of this.”