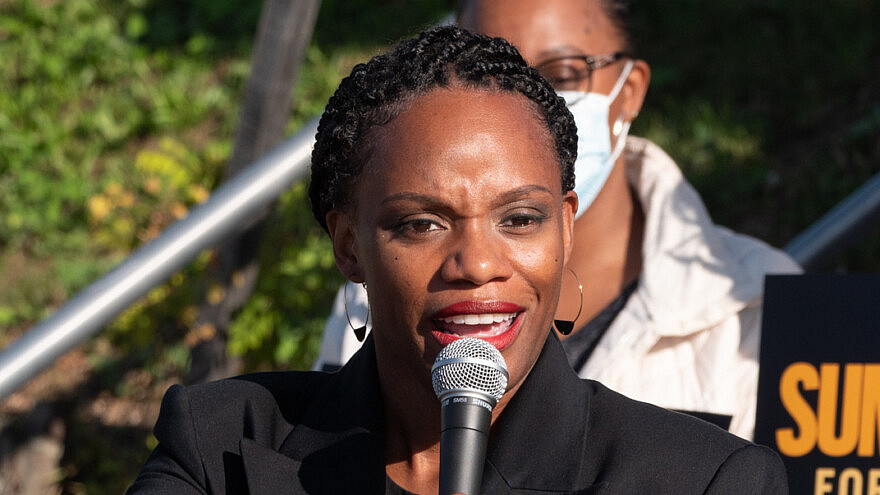 (November 7, 2022 / JNS) In Tuesday’s midterm elections, some Jewish voters are hoping for an upset in Pennsylvania’s 12th District, where insiders say Republican Mike Doyle is closing the gap with Democrat Summer Lee in the final days of the race.

It could all come down to support for Israel.

Some Jewish voters in the district, which encompasses most Pittsburgh neighborhoods—including Squirrel Hill, considered the heart of the Jewish community and the scene of the Tree of Life synagogue massacre in October 2018—have been deeply concerned by what they perceive as Lee’s political radicalism, including on the issue of Israel.

Some, in fact, were so alarmed that they organized a grassroots effort encouraging registered Republicans and independents to switch their party affiliation to Democrat in order to vote against Lee in the Democratic primary.

Several of Lee’s tweets have been of particular concern, including one that criticized U.S. support for Israel during the May 2021 war between Israel and Hamas.

Lee has also tweeted about a “plan” to “dismantle the Democratic Party.”

Many Jewish voters fear that Lee is sympathetic to the group of left-wing congresspeople known as “The Squad,” which is notorious for its hostility to Israel and includes several anti-Semites. The Squad recently organized a fundraiser for Lee.

The United Democracy Project (UDP), a super PAC affiliated with the pro-Israel lobby AIPAC, reportedly spent $80,000 on mailers targeting Lee. This followed a bitterly contested primary in which AIPAC strongly supported Lee’s opponent, moderate Democrat Steve Irwin. According to some reports, UPD is poised to spend over $1 million to support Doyle in a final push.

The last-minute effort to support Doyle reportedly stems in part from polling UDP recently conducted that suggested Doyle is closing the gap with Lee, making the race “highly competitive.”

Lee’s campaign is also well-financed, with large cash infusions from the Democratic Congressional Campaign Committee, which is reportedly investing amounts in the “six figures” to support her.

The Lee-Doyle contest has taken a dramatic turn locally, with the news that Lee declined to grant an interview to The Jewish Chronicle, the local Jewish newspaper.

The Chronicle, a bastion of Pittsburgh’s Jewish community since 1962, has conducted interviews with Doyle and other local congressional candidates. The paper’s Editor-in-Chief Toby Tabachnick stressed that the paper “does not endorse candidates” and wanted to give equal time to all contenders.

JNS reached out to Lee’s campaign for comment, but did not receive a response by press time.

Despite the controversy, Lee has some enthusiastic supporters in Pittsburgh’s Jewish community.

“Summer has spoken numerous times about anti-Semitism—she has stood alongside the Jewish community at a commemoration for the Tree of Life massacre,” said Democrat Sara Stock Mayo, 51, of Squirrel Hill, a spiritual leader and musician. “I have known her for years and I think she’s very real and honest and is passionate about issues in our region.”

“I believe her values are Democratic values—gun reform, climate change and how that is impacting communities of color, and a woman’s right to choose,” she stated. “To me as a Jewish person, those are Jewish values.”

Republican Jeanne Bair, 75, a retired Veterans Affairs counselor from Munhall, Pennsylvania, near Pittsburgh, is voting for Doyle. “From what I know about Mike Doyle, I think he’s a good guy, and I don’t think we’d make a mistake voting for him based on his support for Israel,” she said.

“The Jewish Chronicle contacted Summer Lee to interview her repeatedly and there was no answer, which is very irresponsible towards the voters,” said Democrat Andrea Chester, 72, of Squirrel Hill, a writing instructor at Community College of Allegheny County. “I think her refusal to speak with the Chronicle will change a lot of Jewish voters’ minds to give Doyle a chance.”