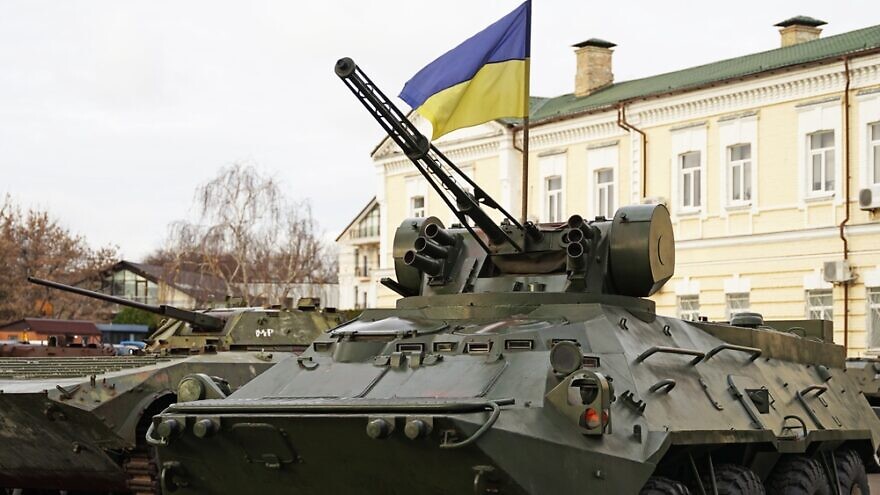 (March 24, 2022 / JNS) In the fourth week of its invasion into Ukraine, Russia finds itself bogged down, struggling to seize major cities, coping with low morale among Russian forces and facing an unexpectedly vigorous Ukrainian defense increasingly armed by a world indignant over attacks on civilians and their cities. A Pentagon official told reporters on Tuesday that Russia has lost 10% of military forces it sent into Ukraine. An article on the site of the pro-Kremlin tabloid Komsomolskaya Pravda, captured by a web archive tool, cited a Russian Defense Ministry official as saying 9,861 Russians have been killed and 16,153 injured. (It later withdrew the article and claimed that it had been hacked.) The North Atlantic Treaty Organization (NATO) puts the number of Russian troops killed, wounded, missing or taken prisoner at 40,000.

So at this point, is a negotiated settlement possible given the gap between the sides?

“Russia can’t come out of this with an unequivocal victory. What’s realistic is that it can reach some understanding with the Ukrainians,” Zvi Magen, senior research fellow at the Tel Aviv-based Institute for National Security Studies (INSS), told JNS.

Magen, who served as Israel’s ambassador to Ukraine (1993-1997) and Israel’s ambassador to Russia (1998-1999), said that from the first day, when Russia attempted—and failed—to land a large force near Kyiv to take the city, it was apparent that things were not going well. By the third day of its self-initiated war, Russia was calling for negotiations and it is now fighting with one eye toward those talks. (Magen said one reason Russia targeted civilian centers is to “soften up the Ukrainians so that they’ll be more flexible in negotiations.”)

“Russia is definitely perceived now as weaker than before, but it wants to leave the impression that it is steadfast,” noted Magen.

On Thursday, the heads of NATO met in Brussels to discuss the Russian threat, including the possibility that the country could use weapons of mass destruction—nuclear, chemical or biological—in Ukraine, especially if Russian losses continue to grow. NATO’s secretary-general Jens Stoltenberg noted this concern, saying that “Russia is trying to create some kind of pretext accusing Ukraine, the United States and NATO allies for preparing to use chemical and biological weapons,” he said, “and we have seen before that this way of accusing others is actually a way to create a pretext to do the same themselves.”

Anna Borshchevskaya, a senior fellow at the Washington Institute for Near East Policy, agreed that the Russian army “at the end of this will come out looking much worse.”

However, she said it’s too early to declare that Russia has lost. “The Russian military can still bring a lot to bear,” she told JNS, and it could still walk away with a win. In her view, a win would mean controlling a larger part of Ukraine, leaving Zelensky with a “rump state.”

It’s the possibility of such a victory for Russian President Vladimir Putin that is Borshchevskaya’s biggest concern. “If he can return from this, you can be sure there will be another invasion in maybe five to eight years and not just in Ukraine, perhaps in Moldova. We’re just going to have the scenario playing out over and over again,” she said.

‘There’s a big mess in the Kremlin’

Steven Horrell, a nonresident senior fellow at the Washington, D.C.-based Center for European Policy Analysis, said it’s hard to envision an agreement that would give Putin a win and at the same time satisfy Ukraine.

He explained that it will be difficult for Putin to spin compromise as success—“even in Russia, where he controls all the spin”—given that the Russian leader has declared his “strategic desired end goal” to be a “new global security architecture” where nations bordering Russia gravitate into its sphere of influence, both militarily and economically, and move away from the West.

On Ukraine’s part, Horrell said, after having fought Russia to a stalemate, it shouldn’t be satisfied with anything less than the complete withdrawal of Russian forces from all Ukrainian territories, including Donetsk and Lugansk in the east, and the Crimea, which it occupied in 2014. “If I were a negotiator for Kyiv at this point, I would definitely demand withdrawal from Crimea and Eastern Ukraine, and that’s likely to be unacceptable to Russia.”

Horrell said his main fear is that the Ukraine war will turn into another “frozen conflict,” where active fighting comes to an end without a political agreement. He noted that this has been Russia’s modus operandi in other conflicts, and it has worked to its benefit, citing Georgia and Moldova as two examples. By occupying parts of both these countries, Russia essentially keeps them in line, “preventing them from reaching their full potential and stopping them from moving further westward,” he said.

“For this reason, any negotiated settlement that leaves Russian boots on the ground in Ukrainian territory is to my mind not a satisfactory conclusion,” he said.

Neither Horrell nor Borshchevskaya saw much chance that Putin would be ousted as a result of his miscalculations in Ukraine. They agreed that he is too entrenched in Moscow, and that neither a putsch by his inner circle nor a broad public outcry is likely. “It’s wishful thinking,” said Borshchevskaya.

Still, INSS’s Magen was less certain, saying, “there’s a big mess in the Kremlin. There are power struggles there. So I do not know how he comes out of it and continues to be as strong as he was before. It could very well be that if he doesn’t bring a nice victory, a pretty agreement, he’ll have more problems at home than in the West.”