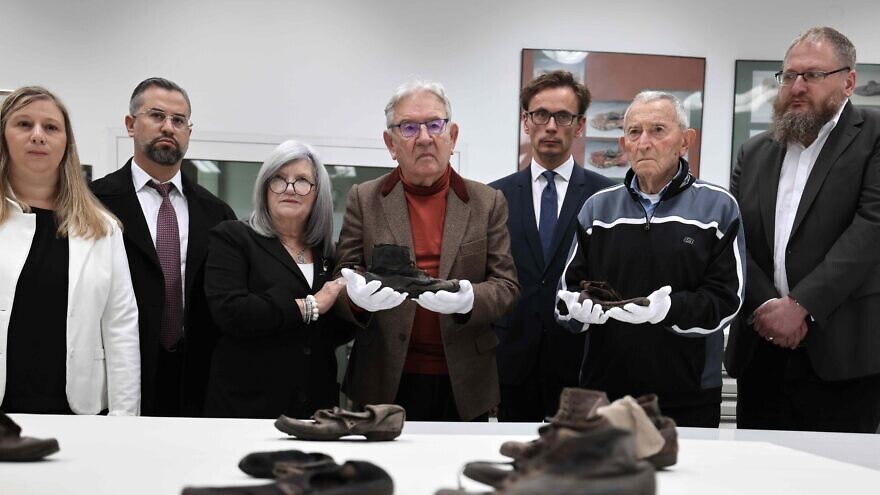 Auschwitz survivors Arie Pinsker (left center), and Bogdan Barnikowski, (right center) hold the shoes of child victims of the Nazis in the Conservation Lab in Auschwitz, joined by representatives of March of the Living, the Neishlos Foundation, and the Auschwitz-Birkenau Foundation. Photo by Tali Natapov/Neishlos Foundation.
Spread the word.
Help JNS grow!
Share now:

Around 8,000 children’s shoes found at Auschwitz are rapidly disintegrating and require immediate conservation so they can be retained as historic documentation, the Foundation said. The conservation project, called “From Soul to Sole,” will continue for two years. A global fundraising campaign has been launched to support the effort.

“We see the conservation of the shoes of these innocent children as an eternal testimony to the brutality of the Nazi regime as well as a significant educational initiative,” said International March of the Living Chairman Shmuel Rosenman and President Phyllis Greenberg Heideman. “We believe that everyone who has ever participated in the March of the Living and others around the world will want to take part in preserving the memory of the children and protecting these deteriorating artifacts from this dark chapter in history.”

The initial contribution to kick-start the project came from Eitan Neishlos, founder and ambassador of the March of the Living chapter in the Gulf States. He is also the founder and president of the Neishlos Foundation.

“In so many cases, the tiny shoes left at Auschwitz are all that is left of young Jewish children murdered by the Nazis,” Neishlos, who is the grandson of a Holocaust survivor, stressed. “By preserving these iconic shoes, we are preserving the memory of Jewish children who were the victims of perhaps the Nazis’ most harrowing cruelty.

“It is our responsibility as the next generation to keep their memories alive and give them a voice from the darkness. Now is the time for our generation to do whatever we can to preserve the memory of the victims and honor the precious living survivors,” he said.

Among the 1.3 million people deported to the Auschwitz camp were some 232,000 children up to the age of 18, the majority of whom were Jews. Only about 500 children under the age of 15 remained alive in Auschwitz when it was liberated on January 27, 1945.