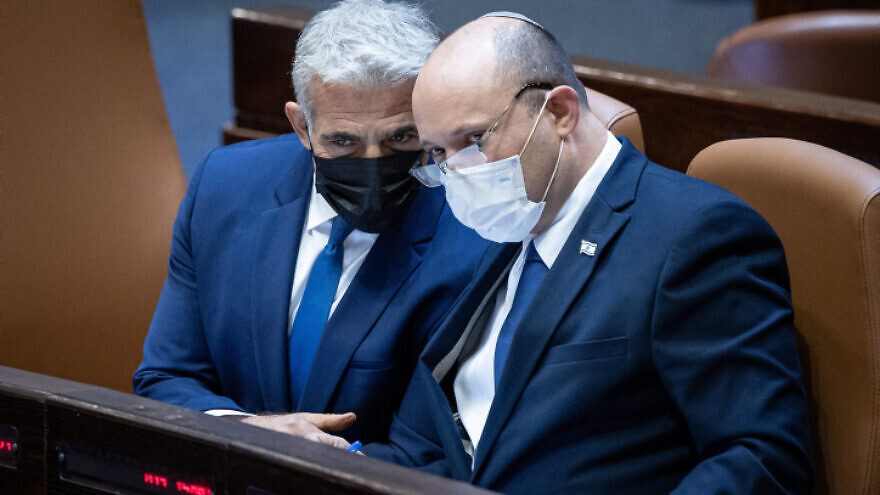 (August 2, 2021 / JNS) Pressure on Iran is growing over a deadly drone attack on a commercial oil tanker in the Gulf of Oman on July 29, as observers in Israel debate what the optimal Israeli response should be.

During a cabinet meeting on Sunday, Israeli Prime Minister Naftali Bennet said the attack served as a reminder of Iranian aggression, stating that this time, the aggression occurred “on the high seas. The Iranians, who attacked the ship Mercer Street with unmanned aerial vehicles, intended to attack an Israeli target.”

“Iran, in a cowardly manner, is trying to evade responsibility for the event. They are denying this. Then, I determine, with absolute certainty—Iran carried out the attack against the ship,” he warned. “The intelligence evidence for this exists, and we expect the international community will make it clear to the Iranian regime that they have made a serious mistake. In any case, we know how to send a message to Iran
in our own way.”

Reports of the attack surfaced on July 30, when multiple Iranian drones reportedly slammed into the Japanese-owned tanker, which is managed by British company Zodiac Maritime, killing a British and a Romanian national.

The ship’s British management company is owned by Israeli businessman Eyal Ofer, who is based in London.

Earlier in July, a commercial vessel that was once owned by Ofer’s company was targeted by Iran in the Indian Ocean, as part of a longer-standing shadow war in which the Iranians have been targeting civilian commercial vessels they believe are linked to Israeli business assets.

According to international media reports, Israel in the past has targeted Iranian ships in a non-lethal manner that were illegally carrying oil to the Syrian regime run by Bashar Assad as part of a Hezbollah financing scheme, in which Syria repaid its oil debts by transferring cash to the Lebanese terror organization.

In response, Iran had targeted commercial vessels, but the Islamic Republic may have also begun using the “sea shadow war” to settle other scores.

According to a report aired by the Arabic-language Iranian state TV Al-Alam, the attack on the ship was retaliation for a recent Israeli strike on Al-Dabaa Airport in Al-Qusayr, Syria—a site that has been linked to Iran’s precision-guided missile program. 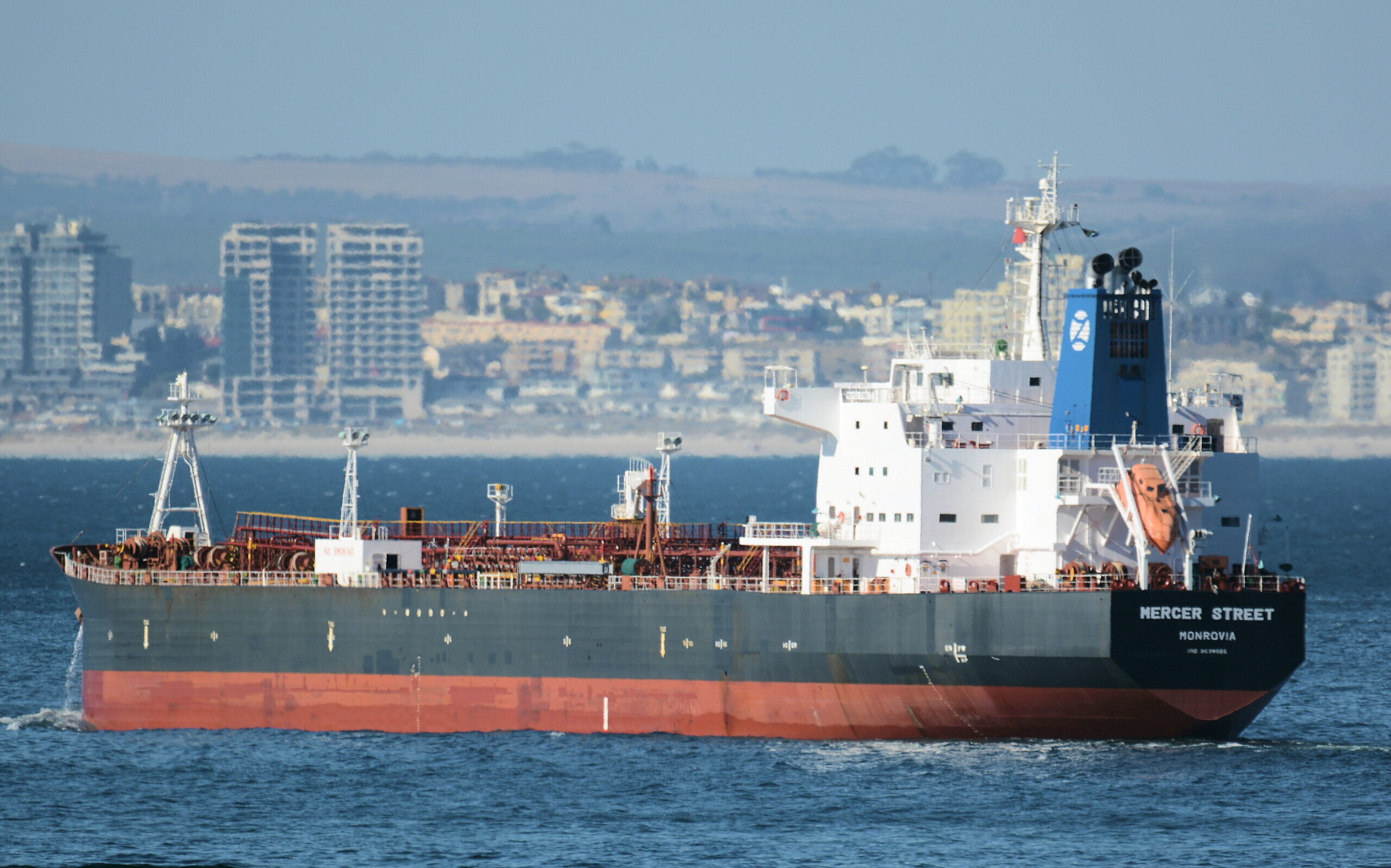 The “Mercer Street” oil tanker, managed by an Israeli owned-company, was struck by what U.S. explosives experts say was an Iranian drone in the Arabian Sea on July 29, 2021. Photo by Johan Victor/MarineTraffic.

Professor Uzi Rabi, director of the Moshe Dayan Center for Middle Eastern and African Studies at Tel Aviv University, said Sunday on his Facebook account that the attack demonstrated improved Iranian capabilities at sea, as well Iranian readiness to exact higher prices in its confrontation with Israel.

He described a more demanding phase in Israel’s conflict with Iran, adding that beyond the tactical and intelligence levels, Iran appears to be much more self-confident and certain that recent events are playing in its favor. “Beyond diplomatic condemnation, Israel will have to think carefully about the proportionality and depth of a response,” added Rabi.

‘We are entering into a sensitive period of time’

Ely Karmon, a senior research scholar at the International Institute for Counter-Terrorism (ICT) in Herzliya, argued that Israel’s response, in this case, should be focused on the diplomatic-political front, and not the military one.

“This is not an Israeli event,” Karmon told JNS, in reference to the ship. “The company managing it is British, and it is Japanese-owned. The casualties are not Israeli.”

Karmon described divisions among defense experts regarding the wider “sea shadow war” that has reportedly become an additional front in the Israeli defense establishment’s “campaign between the wars”—a series of preemptive acts to disrupt Iranian regional arms trafficking and entrenchment efforts.

“I’m among those who think that it’s not clear how successful the ‘sea shadow war’ has been compared to the campaign between the wars in Syria or other operations that have not been publicized,” said Karmon. “As a result, I think the most important thing, in this case, is the diplomatic and political effort. The Iranians have to be pressed, and the diplomatic campaign is finally working following the fact that there are non-Israeli casualties.”

Israel has called for the U.N. Security Council to meet to discuss the attack. On Monday evening, U.S. Secretary of State Antony Blinken said Washington is in close coordination with Britain, Israel and Romania, adding that there would be a joint response. 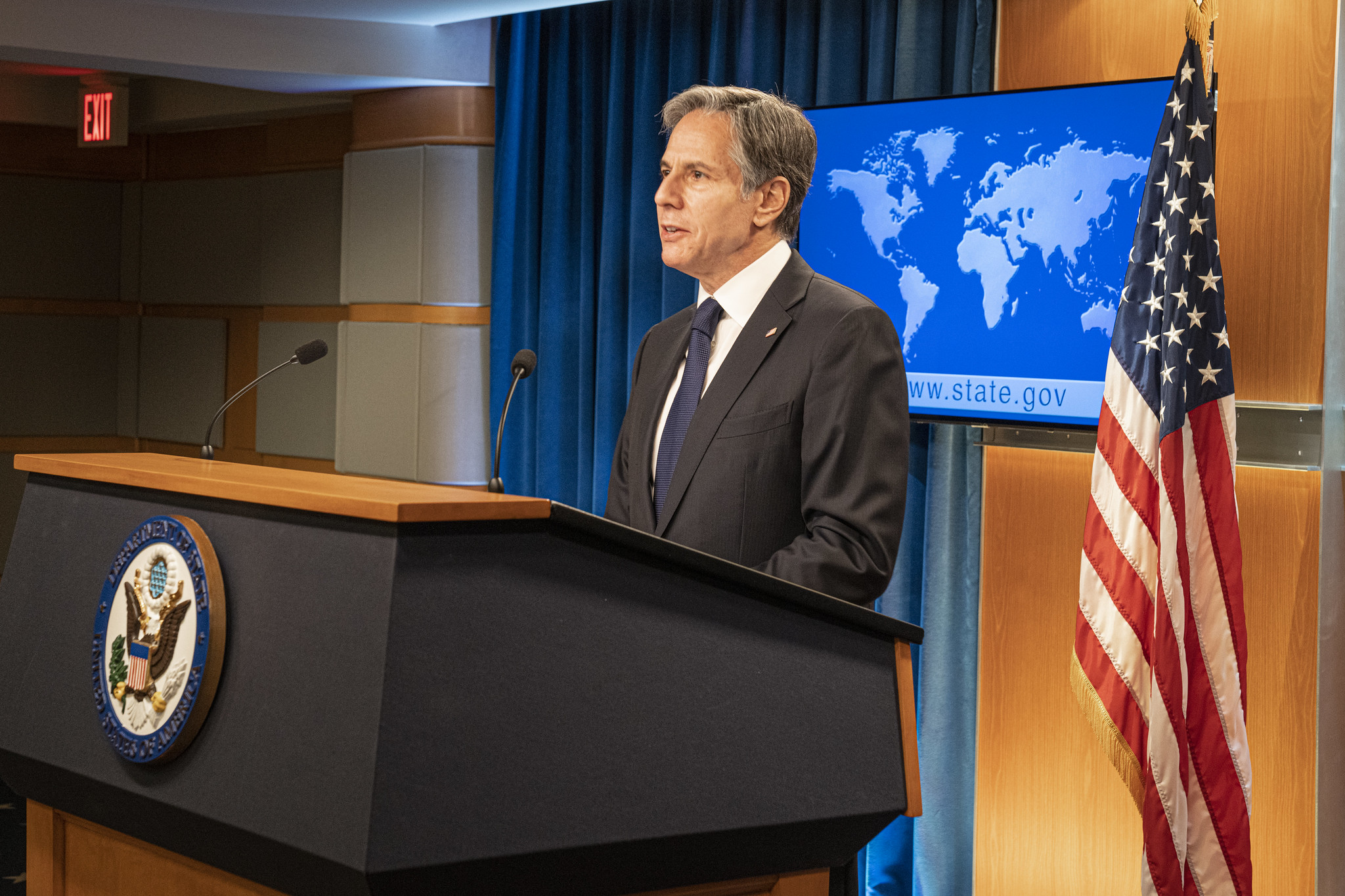 U.S. Secretary of State Antony Blinken delivers remarks to the press at the U.S. Department of State in Washington, D.C. on Aug. 2, 2021. Credit: State Department Photo by Freddie Everett.

Earlier on Monday, the British Foreign Office summoned the Iranian ambassador in London to a meeting over the attack.

“There is a front that has formed that must be encouraged,” said Karmon. “But we don’t need an Israeli military response, which would unnecessarily raise the bar.”

He added that it was vital for Israel to focus on the broader issues and avoid letting the ship attack drag it into a conflict that could act as a distraction from those issues, naming them as the Iranian nuclear program’s progress and the possible imminent Iranian-Hezbollah takeover of Lebanon.

Iran’s nuclear progress is in line with its goal of becoming a nuclear threshold state, he said, and the United States is uncertain about how to respond, following the election of the new hardline Iranian president, Ebrahim Raisi, who is slated to take office on Aug. 3.

“There is a gradual sense that the Iranians don’t really want a new nuclear deal—that they are moving away from it, even though the Americans ran towards it,” said Karmon. “We are entering into a sensitive period of time, irrespective of the ship attack. It is a very dangerous era. In the background is the Lebanese issue.

“There is some form of an attempt by Hezbollah to take over Lebanon,” he cautioned.

The fact that Sunni billionaire Najib Mikati has been charged with forming the next Lebanese government is no consolation, said Karmon, since he has built coalitions with Hezbollah in the past.

“Hence, the Israeli government has to pay close attention to the interface between nuclear negotiations, the U.S. policy on the talks and the Lebanese issue. These issues can interact with one another,” pointed out Karmon. “The story of the ship should be used for a diplomatic campaign, but not for issuing military threats. Israel, in any case, has to examine strike options against Iran—not because of the attack on a commercial vessel, but because of its nuclear program.”