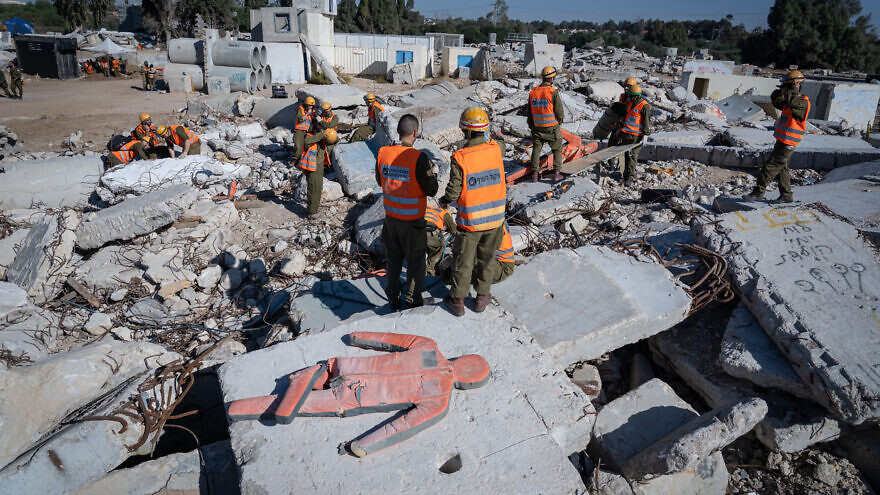 (February 21, 2022 / JNS) Screams pierce the air as the dust clears and survivors begin to emerge from the rubble. More than 10,000 people have been killed and 20,000 more are injured. Thousands of buildings across the country have collapsed. In some areas, there is deathly silence; in others, cries for help can be heard from beneath the debris. The streets are impassable; shattered glass, bricks and chunks of concrete are strewn everywhere. Trees, light poles and electrical wires lie across the ground and where there were once unbroken roads, deep cracks and chasms now threaten cars and pedestrians.

Dazed citizens sit on the curb as they nurse their wounds and mourn dead loved ones. Some able survivors begin to search for spouses, children, parents. In many cases, it’s too late. Water gushes everywhere from ruptured pipes, and the unmistakable smell of natural gas hangs in the air. One errant spark could cause an explosion and, with it, more death and injury. Emergency services are overwhelmed; many of the main roads are impassable, and they can’t reach the wounded, let alone transport them to a hospital. Those with life-threatening injuries will die as a result. And if the dead aren’t removed, identified and buried quickly, disease may spread, and the stench will become unbearable.

This terrifying scenario is not unlikely, nor is it war-related. Israel today faces a looming threat; it is due for a massive, imminent earthquake that could happen at any time.

Israel sits on the Syrian-African rift fault line—a junction of the major African and Arabian tectonic plates, which run through the Red Sea, the Dead Sea and Jordan Valley up to northern Syria. A smaller rift also branches west through Israel’s Carmel region.

In 2012, Israel held its first national exercise to examine how prepared the country and its institutions are for a severe earthquake. The results were dismal. The question is: How much more prepared is Israel a decade later? Many experts seem to agree: not much. Most Israeli citizens today know what to do in the event of a rocket attack but have no idea what to do in the event of an earthquake. This ignorance is dangerous and could result in many preventable deaths. 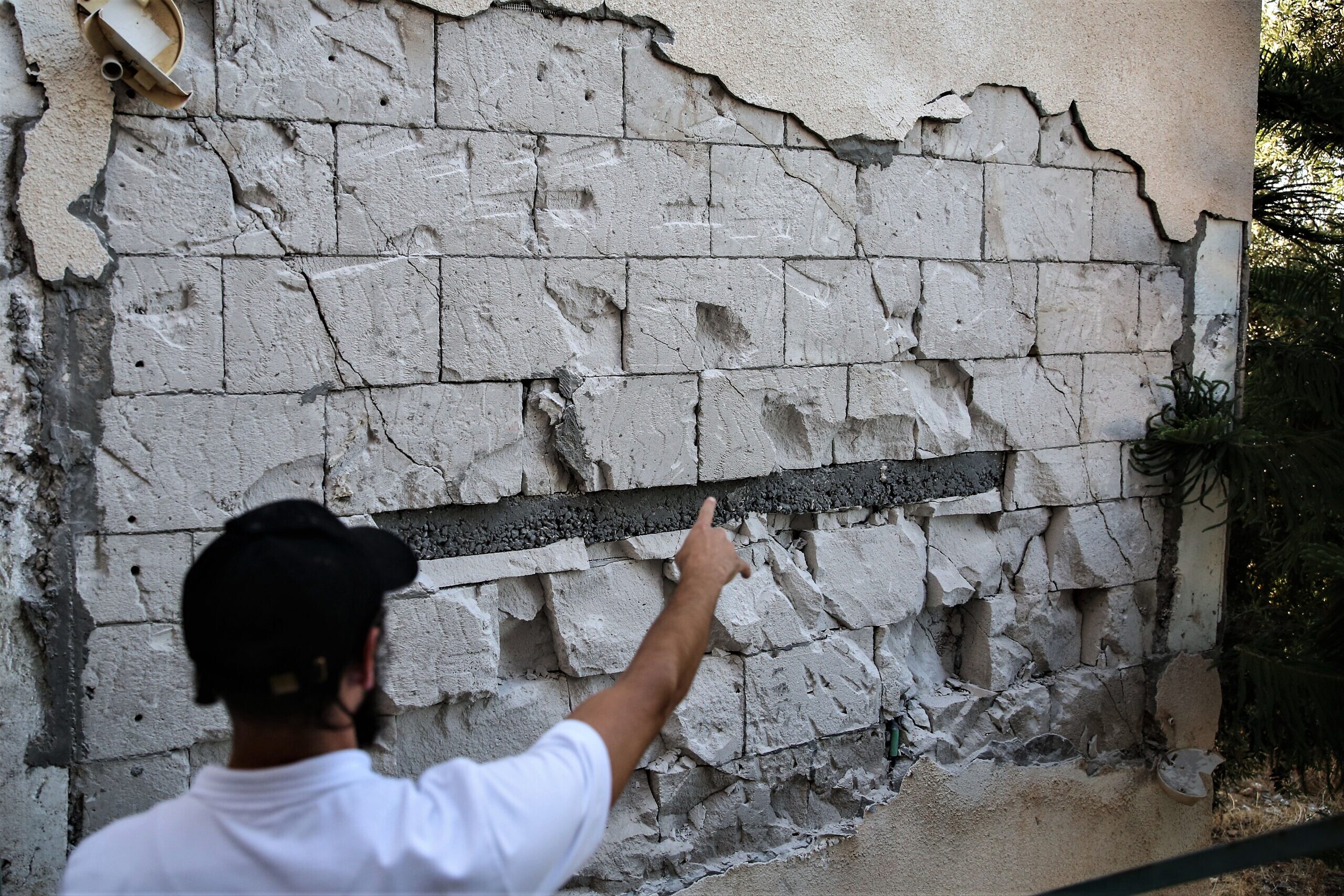 View of damage caused to a home in the city of Tiberias in northern Israel after earthquakes shook the area, on July 9, 2018. Most buildings are not made to survive such natural disasters. Photo by David Cohen/Flash90.

‘The only source of information’

Shmuel Marco, an expert on earthquakes at Tel Aviv University’s Department of Geophysics, told JNS that the government must make preparations based on existing knowledge from previous earthquakes “because this is the only source of information we have about what earthquakes might do in the future.”

Marco noted that the government is already in the process of creating an early warning system in case of such an event.

A pair of earthquakes that shook northern Israel on Feb. 15 and Feb. 16 prompted further calls from local council heads to improve municipal and national readiness before disaster strikes.

The Geological Survey of Israel (GSI) reported that a magnitude 3.1 tremor shook the north on Wednesday morning, about 12 hours after a magnitude 3.5 earthquake was felt in the same area on Tuesday evening. The epicenter of the quakes was some 15 kilometers (9 miles) northeast of Beit She’an, according to the GSI.

These quakes make for four tremors in the area in the span of less than a month: on Feb. 3, a magnitude 5.4 earthquake occurred in Cyprus and was also felt in Israel. Then days before that, residents of Tiberias, Tzfat, Yavne’el, Haifa and the Krayot area in northern Israel reported feeling a 4.1 magnitude earthquake, the epicenter of which was 10 miles northeast of Beit She’an, south of the Sea of Galilee.

The most extensive and deadly event in the region until now occurred in July 1927, and before that in 1837. An even earlier earthquake took place in 1759. The 1927 earthquake resulted in 285 dead and 940 wounded, as well as caused extensive damage to buildings.

GSI has now upgraded and expanded the national Israeli Seismic Network (ISN) with more than 110 stations country-wide as part of the implementation of TRUAA. The stations are distributed mainly along the main fault systems, the Dead Sea Transform and the Carmel-Zfira Fault. 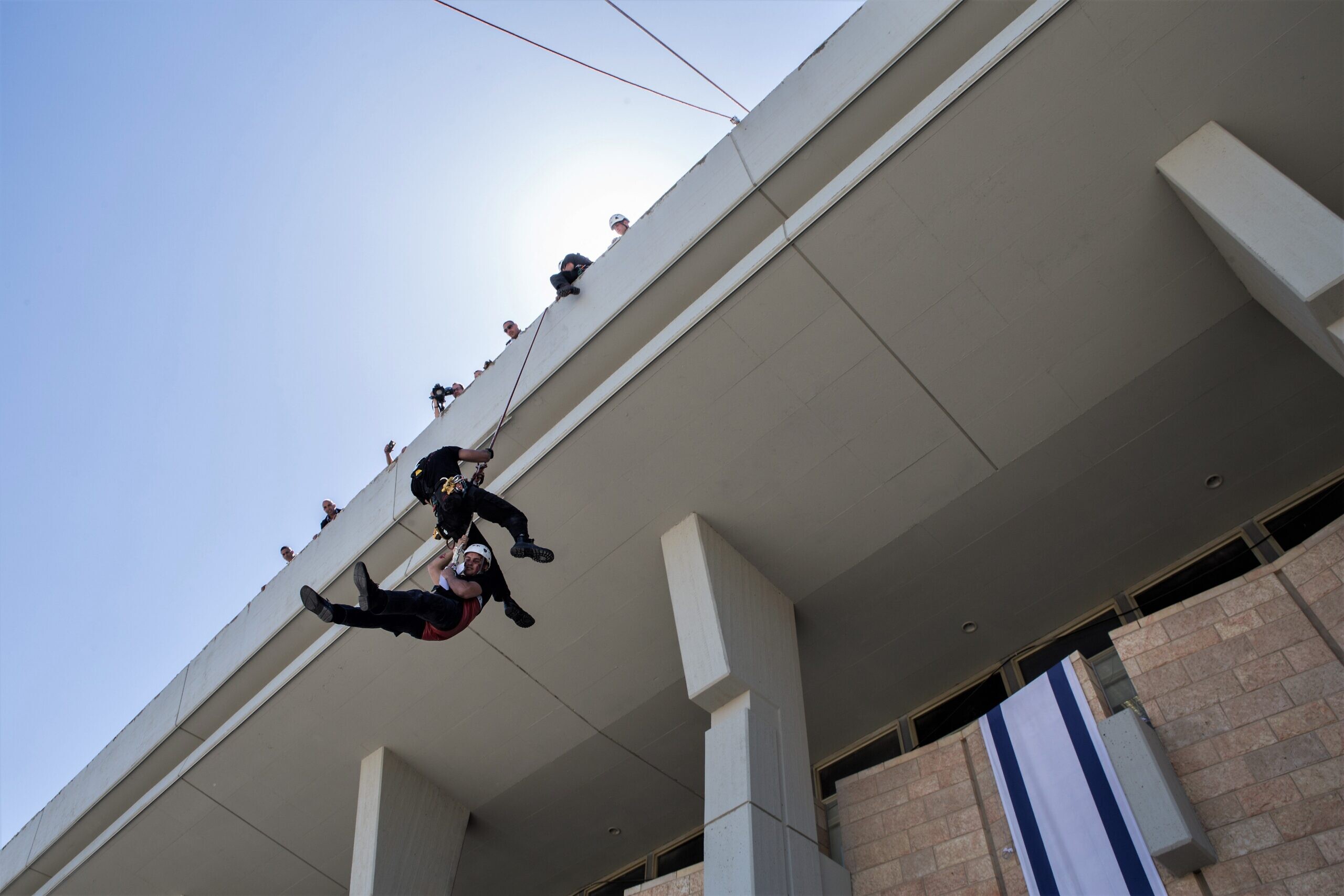 While earthquakes cannot be predicted with today’s technology, EEWS is a tool to reduce earthquake risk to the maximum extent possible. Their basic approach is to issue an alert as soon as possible following the occurrence of an earthquake before damaging seismic waves arrive and cause destruction, injury and possible death.

Marco explained that Israel’s TRUAA relies upon detecting the preliminary pressure (P) waves, which could, in theory, give the public a few extra seconds to exit buildings and dangerous areas before the more destructive secondary shear (S) waves hit.

Whatever damage is caused by the S wave, could also potentially be exacerbated by any aftershocks that follow.

The next challenge, according to Marco, is to connect the system to the public. The government is urging the public to install an app by the Home Front Command on their phones so they will receive a warning if an earthquake hits.

“But this is not enough,” warned Marco. “It won’t save many lives.”

He suggested the country needs to come up with a system that would automatically disconnect gas connections and high-voltage power lines, as well as bring elevators down to the ground floor.

“There are many connections like these that need to be automatic and operational in order to save lives,” he said.

Marco also emphasized that the warning system “needs to be made highly dependable, which is a considerable challenge,” especially since people often ignore what they perceive to be false alarms.

Experts agree that while many people will be able to exit their homes, this is not the case for the thousands of people stuck in public areas. For this reason, the country needs to focus on reinforcing all public buildings, such as hospitals and schools, in addition to structures that tend to be full of large groups of people, such as office buildings.

For years, scientists have searched for ways to predict earthquakes. Studies have shown that animal behavior often changes dramatically in the minutes and seconds leading up to an earthquake. Preliminary research has shown that some animals are indeed capable of detecting seismic activity. Elephants, for instance, have pressure receptors in the soles of their feet that can perceive infrasound at a frequency below the human hearing threshold. Thus, they can detect foreshocks and earthquakes long before humans can.

The International Cooperation for Animal Research Using Space (ICARUS) is a program through which scientists are working together to develop a satellite-based system to find out more about the life of animals on earth: the migratory routes they take, their living conditions and their behaviors. By attaching mini-transmitters to a variety of animal species, scientists can send the data to space where it will then be transmitted to a ground station and studied by researchers. The information could even help to predict ecological changes and natural disasters, such as earthquakes.

Amos Salamon, a senior researcher at GSI, told JNS that the threat of a tsunami is another issue facing Israel in the event of an earthquake. He said a tsunami could hit “anywhere from Haifa down to Ashkelon.”

“Earthquakes of magnitude 6 and above along the Jordan Valley can trigger a submarine landslide that, in turn, can generate a tsunami,” he explained. “This is the reason for the Home Front Command instructions. If you are near the coast and feel strong shaking, you should evacuate immediately away from the shore to higher ground and follow evacuation signs.”

Experts agree that Israel needs to study disaster-risk reduction methods to prevent as many deaths and injuries as possible. Since national emergency services will likely be hampered in their ability to reach so many victims, one suggestion has been for each municipality to be responsible for the preparation of its own citizens for such an event. This could include ensuring that a certain percentage of the population of each municipality is trained as a first responder. Another suggestion is that citizens should stockpile basic medical supplies, in addition to water and nonperishable food to last a few days.

The Home Front Command app can be downloaded here.