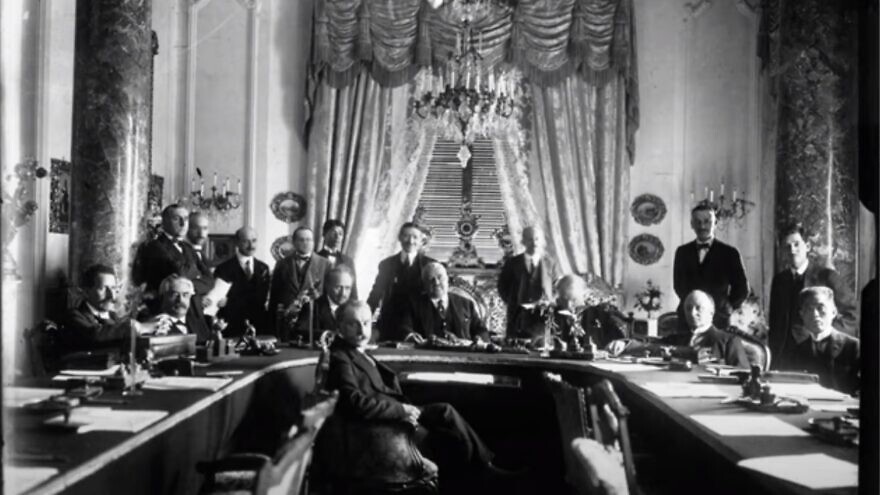 (April 27, 2020 / JNS) Exactly 100 years ago this week, World War I allied powers including the British Empire, Italy, France and Japan, along with the United States serving as an observer nation, met in San Remo, Italy, and ratified the 1917 Balfour Declaration, calling for a national home for the Jewish people in “Palestine.”

Known as the “San Remo Conference,” Britain was given the mandate to control the areas, which consist of what is now modern-day Israel and Jordan (along with Iraq), that formerly were controlled by the defeated Ottoman Empire.

The mandate was ratified two years later in a unanimous vote by more than 50 member countries of the League of Nations with the explicit goal of overseeing the establishment of a State for the Jews.

In other words, the resolutions passed at San Remo, and subsequently by the League of Nations, codified the Jewish people’s rights to a homeland under international law.

To mark the historic, but often times downplayed, event in modern Jewish history, the Im Tirtzu Israeli NGO, which seeks to strengthen and advance the values of Zionism in Israel, along with the Canadians for Israel’s Legal Rights (CILR) Organization, held an online conference this past Sunday. The broadcast featured interviews with top academics, legal experts and other leading Israeli personalities to discuss San Remo at 100.

On the conference, former Deputy Foreign Minister and Knesset member Danny Ayalon, who also served as Israel’s Ambassador to the United States, noted that many people, including diplomats, have little knowledge about the legally binding resolutions passed at San Remo.

He said to JNS that “I was privy to many diplomatic conversations, including those by heads of state, who call for Israel to carry out territorial evacuations [citing international law]. But this is wrong. This neglects the binding resolutions passed at San Remo, which internationalized Balfour.”

Ayalon added that the United Nations “respected all commitments passed by the League of Nations, except when it comes to San Remo. Furthermore, the barrage of countless biased and discriminatory anti-Israel U.N. resolutions, which are the result of an automatic Arab and Palestinian majority, refer to these [U.N. resolutions] as carrying the weight of international law, but that’s not true. Unfortunately, nobody really bothers looking into real international law.”

League of Nations Mandate is ‘downplayed for political reasons’

Matan Peleg CEO of Im Tirtzu agrees that many are unaware of San Remo’s significance including many Israelis. He told JNS that while San Remo internationally legitimizes the fact “that the land of Israel belongs to the Jews, the problem today is that a lot of Israelis aren’t aware how important that event was.”

He explained that while Israelis learn about the Balfour Declaration, that the document “didn’t have a map on it. And at the same time, that declaration was only from one country—Great Britain.” San Remo he says “legitimized a Jewish state on a world level.”

Peleg says that one of the goals of the conference was to educate Jews in communities worldwide and provide them with knowledge to stand up for Israel because “how can you confront anti-Israel propaganda if you don’t know Israel’s legal right to exist?”

Citing the importance of San Remo, Eugene Kontorovich, director of the Kohelet Policy Forum and a professor at the George Mason University School of Law, told JNS that it was a “scandal” that Jerusalem and other cities in Israel name streets “Kaf Tet B’November” (Nov. 29), to celebrate the passing of the U.N. General Assembly resolution in 1947, calling to partition Israel into a state for the Arabs and the Jews, while there are no streets named for San Remo.

He believes that the partition plan is the more celebrated anniversary because it was “a one-time dramatic event, with the vote aired on the radio, with seven times more Jews living in Israel in 1947 [when compared to 1920], while San Remo was part of a set of long and drawn out set of conferences. It wasn’t a single moment.”

Kontorovich says that while the League of Nations Mandate is, in fact, mentioned in Israel’s Declaration of Independence, it is “often downplayed for political reasons.” He explains that “those who are opposed to Israel’s legal rights in Judea and Samaria use the partition plan to bolster their arguments,” while failing to cite San Remo.

Ultimately though, he says that Israel exists today not because of the mandate or the United Nations, but because Israel won its war of Independence in 1948. Even with sound legal claims, he adds, “If we had lost the war, we would have been one crocodile tear under the bottom of the [U.N.] Secretary General’s ink blotter on his desk.”

‘A state established by King David’

Prominent attorney, human-rights activist and founder of Shurat HaDin–The Israel Law Center Nitsana Darshan-Leitner explained to the conference that the decision by the world powers to call for the establishment of a Jewish state wasn’t done out of a sense of Zionism, but rather was part of the allies strategy in maintaining world order following World War I. She says that Britain’s Mandate was in fact one of 12 League of Nations’ mandates.

Regardless of motive, she told JNS that what made the San Remo decision legally binding was the fact that “it was written under the agreement of the League of Nations, and therefore, it has legal validity.”

She explained that as opposed to U.N. General Assembly Resolutions, which are just suggestions, or even U.N. Security Council Resolutions which carry more weight, for something to become binding in international law, “you need a bilateral signed treaty by parties.” And not only this, but it requires “major world consensus,” which she says took place at San Remo.

Nevertheless, Darshan-Leitner argues that “relying on San Remo is not the best strategy Israel should adopt [to justify its existence] because people don’t really care about the legal argument. Maybe it’s good in court, but you can’t really bring it up in the public arena or diplomatic world.”

Instead, she suggests that “Israel has to base its rights to the Land of Israel on our historical, religious and moral rights to be here, and not on signed documents.”

Mordechai Kedar, an Arab-affairs expert and a professor at Bar-Ilan University in Ramat Gan, seemed to agree with Darshan-Leitner about focusing on Israel’s ancient connection to the land for public diplomacy purposes.

When asked during the conference to share his thoughts as Israel prepares to celebrate its 72nd birthday, he responded that “the State of Israel made a big mistake when it claimed it was established in 1948. Israel should have said from the beginning that we are a state that was established by King David in Jerusalem more than 3,000 years ago. Sure, there were times when we [the Jews] were on the outside, but we are the renewed State of Israel, and we are a direct extension of the Jewish state which was here. So our real age isn’t 72, but rather, over 3,000 years old. That’s what we should have said on the first day of our establishment [in 1948], but unfortunately, we didn’t, and we only count 72.”