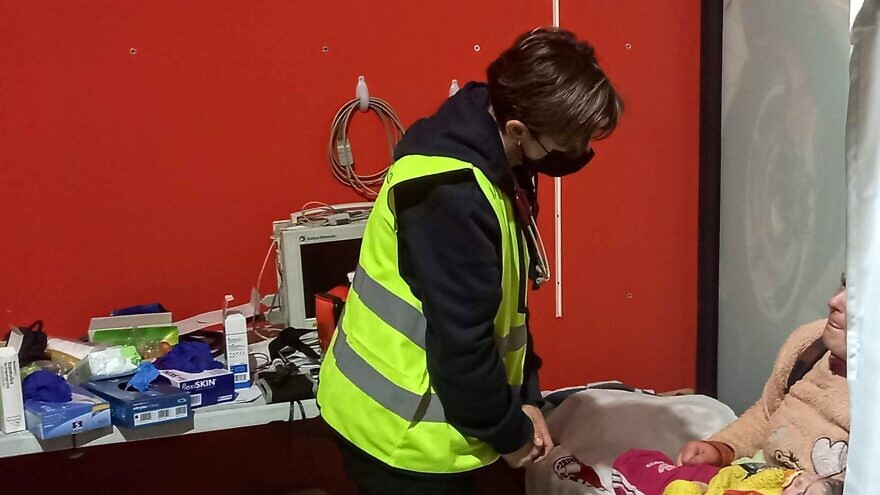 (March 7, 2022 / JNS) The people are arriving cold and exhausted after trudging by foot from war-torn Ukraine across the border into Poland, said Dr. Dorit Nitzan, who left for Poland last week with a delegation of physicians, nurses and social workers through the NATAN Worldwide Disaster Relief organization.

“The needs are immense and we are doing our best in a small clinic,” she said.

Working closely with the Red Cross of Poland, the U.S.-based aid group, Operation Blessing, and the Mexico-based CADENA, Nitzan’s delegation has taken over a shopping mall in Medica, where it is serving 3,000 refugees.

“We see the sickest ones,” she told JNS.

So far, some 500,000-700,000 of the more than a million Ukrainian refugees have fled to Poland, according to the most recent reports. 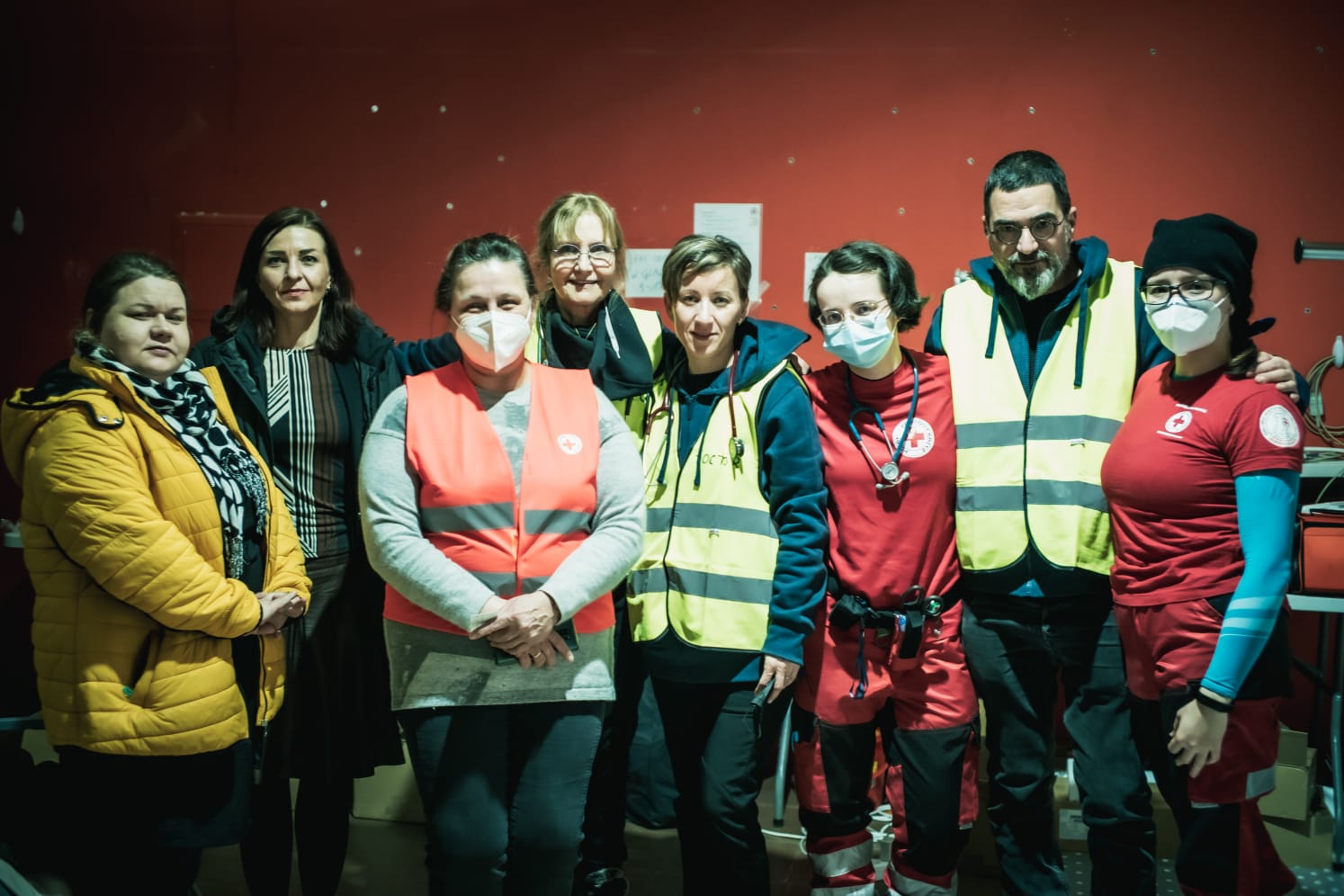 Nitzan had to get off the phone in the middle of her interview because an elderly woman collapsed. She was constantly torn between the call and the patients on the ground, including young children desperate for medical care. The NATAN team, she said, is expected to stay in the field for at least two months, with volunteers rotating in and out of the country every couple of weeks.

Nitzan served as the World Health Organization’s regional emergencies director in Europe until last month, including spending 2012 to 2016 in Ukraine. She recently retired from Geneva and returned to Israel.

“I felt this was where I should be,” she explained. “So, when NATAN called, I said I would help them if they would just take me with them to Ukraine.”

The team is modest and humble, sleeping together on mattresses in the mall to be available for their patients.

‘Children are our future’

Nitzan’s delegation is just one of the dozens of humanitarian efforts being carried out by the Jewish state in Ukraine and the surrounding countries.

During a situational assessment held on Sunday, Israeli Foreign Minister Yair Lapid instructed his ministry and Mashav, Israel’s Agency for International Development Cooperation, to continue with four main relief efforts: ongoing humanitarian aid according to the needs of Ukrainian authorities and the surrounding countries; the transfer of six giant generators to Lviv Hospital, which will allow for its continuous operation, even without its regular power supply; assistance centers for Jewish and non-Jewish refugees at border crossings where Foreign Ministry personnel are stationed, with an emphasis on providing winter gear; and to establish a fully equipped field hospital in Ukraine.

The field hospital is being built this week at Sheba Medical Center at Tel Hashomer, which sent a representative to Ukraine on Monday to assess the situation on the ground. The hospital is a collaboration of the Health and Foreign Ministries, together with Sheba and Clalit Health Services. Medical personnel from other Israeli hospitals will also travel with the delegation.

The hospital will include an internal-medicine ward for adults and children, an emergency room, delivery room and primary-care clinic, the ministry said. It will also use advanced remote telemedicine technologies spearheaded by Sheba. Some 80 volunteers will man the facility, according to Professor Elhanan Bar-On, the director of the Center for Disaster Medicine & Humanitarian Response at Sheba.

“This is the least we can do to help the Ukrainian people in the face of a brutal Russian invasion,” Health Minister Nitzan Horowitz said on Sunday morning during a visit to Sheba. “It is our moral duty to increase humanitarian aid and extend assistance to the people of Ukraine.”

Also joining the field hospital will be a delegation from Schneider Children’s Medical Center of Israel, which will be solely responsible for the children’s compound at the hospital.

“We at Schneider believe and know that children, wherever they are, are our future in Israel and around the world,” said the hospital’s deputy director, Dr. Efrat Baron-Harlev. “The Schneider team volunteered to help with all their might, in order to take care of all of the physical and emotional needs of the children of Ukraine. We are proud to be part of this delegation and hope for better days.”

In addition, Schneider is preparing to receive sick children from a hospital in Kyiv, who will be brought to Israel on a special flight in the coming days, the hospital said on Saturday night.

It added that it is transferring lifesaving cystic fibrosis (CF) medicines to the country in cooperation with the local C.F. association.

“C.F. is a very serious disease that affects many body systems and causes severe damage to lung and pancreatic function, with the main damage being to the respiratory and digestive systems,” explained Dr. Dario Prais, head of the hospital’s Institute of Pulmonology.

He said that lung disease associated with C.F. can progress rapidly.

“The drugs that patients will receive are life-saving drugs, without which they will not last long,” he concluded.

Finally, a delegation of four doctors from Hadassah Medical Center also left for Poland on Sunday night to help Ukrainian refugees crossing the border in need of immediate medical aid. They will be stationed at the University Hospital in Lublin.

An ‘influx of donations’ 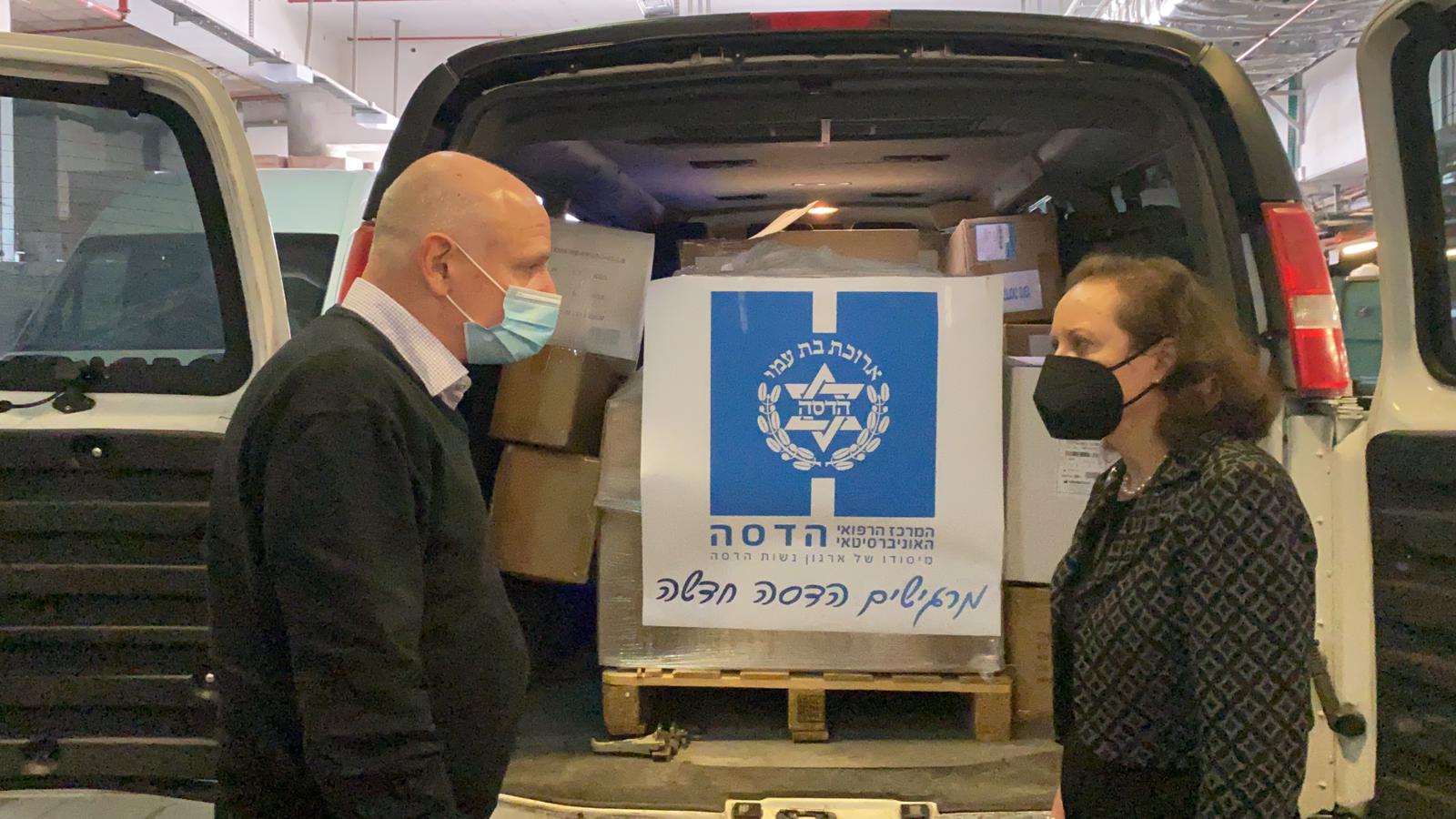 To help manage the influx of donations by Israeli civil society, the Foreign Ministry established Matat (an acronym for “Donation and Coordination Center”) on Sunday. The program is being managed by Israeli Ambassador to the Czech Republic Daniel Meron.

“There are already dozens of companies, organizations and private individuals currently working to transfer various kinds of humanitarian aid from Israel to Ukraine,” the Foreign Ministry said.

Last week, Hadassah Women’s Organization donated $25,000 in medical equipment to Ukrainian refugees. The money was sent to the Polish border in coordination with the Ukrainian embassy in Tel Aviv.

The medical supplies were purchased via “generous donations from around the world through the Hadassah Women’s Organization,” Hadassah’s acting director-general, Professor Yoram Weiss, said. “In such a challenging time, we must all be leveraged, each to the best of his abilities, and in accordance with the knowledge and experience gained in dealing with such incidents.”

Health Ministry calls on humanitarian workers to get vaccinated

To help keep delegations safe, the Health Ministry sent out a warning to humanitarian travelers earlier this week, calling on them to get vaccinated against certain communicable diseases and viruses before heading into the field.

The ministry said that travelers are at increased risk of contracting polio, coronavirus and measles in Europe.

“Due to the spread of type 2 polio virus from a modified vaccine source—circulating vaccine-derived poliovirus type 2 (cVDPV2)—it is recommended to be vaccinated against polio,” the ministry said in a statement. “Adults who received a full series of childhood vaccines and one booster dose over the age of 18 are considered vaccinated.”

It also called on all aid workers to get jabbed against COVID-19 and for anyone born after 1957 who has not had the measles or a vaccine, to get two doses of the measles, mumps and rubella (MMR) vaccine four weeks apart—at least one dose before heading over to the war zone.

According to the Consular Division of the Foreign Ministry, most Israelis who are not supplying aid have left Ukraine. In the three weeks since the government issued its travel warning, about 10,200 Israeli citizens have exited the country. It is estimated that there are only some 2,000 Israeli citizens still in there.