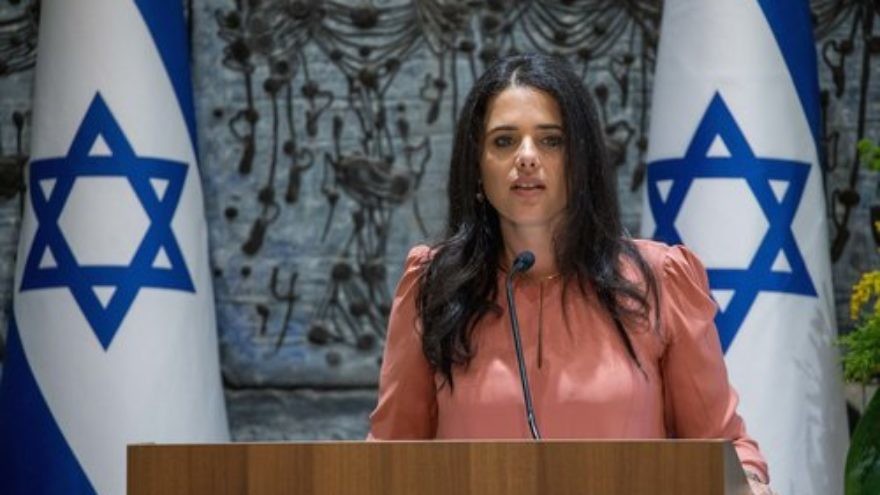 Shaked is one of 28 female parliamentarians among the 120 lawmakers in Israel’s Knesset, and one of two female Knesset member from her party. She is one of four female ministers in Prime Minister Benjamin Netanyahu’s 23-member cabinet, and one of two women serving on Israel’s 10-member inner security cabinet.

A mother of two, Shaked lives a secular lifestyle in Tel Aviv, yet is a member of Israel’s religious nationalist Jewish Home party. At age 41, she portends to help shape Israeli policy for years to come. Shaked offered a wide-ranging interview to JNS.org on her role as justice minister and as a member of Israel’s security cabinet.

Limiting influence of the High Court

As justice minister, Shaked has promoted limits on the influence of Israel’s High Court of Justice. Widely considered to be an activist court that has strong left-wing political leanings—and often opposed to the policies of Israel’s current right-wing governing coalition—the court often seeks to overturn legislation that it disagrees with politically.

“In Israel there is ongoing debate, actually like in the U.S., regarding the level of interference the supreme court needs to take in government decisions, and in laws that the Knesset has legislated.  In my view, and I think there is wide agreement on this, the supreme court needs to be less activist, and not interfering in the political direction of legislation,” Shaked said.

Suggesting that the court’s role should be to rule only on whether legislation has “violated any procedures,” Shaked insists, “If it is a matter of governmental discretion, the supreme court should not be able to interfere in the position of the government.”

For example, last year the High Court blocked the government’s decision to stabilize the price of natural gas for 10 years, as part of a multi-year commercial deal. The government viewed the clause as crucial for securing multi-billion-dollar foreign investment in Israel’s natural gas infrastructure.

“Regarding the gas deal, it is totally an economic decision,” Shaked said. “And as long as it’s being conducted according to the law, I don’t think the supreme court can assert better judgment or authority than the government itself.”

Further, Shaked noted that the High Court has disproportionate influence in the selection of new justices, with sitting judges representing a unified block of three members within the nine-member Justice Selection Committee.

This past year, with four of Israel’s High Court justices nearing retirement, Shaked worked as head of the Judicial Selection Committee to ensure that three of the four new justices selected were not political carbon copies of the justices they would be replacing. In this manner, Shaked has successfully changed the political makeup of the supreme court for years to come.

Shaked said Israel’s judicial selection procedures should more closely match those of the U.S., “in which the judges for the Supreme Court are being selected by the politicians, by the president and the Senate,” and not by the court itself.

Shaked’s ministerial role means she has needed to publicly weigh in on a slew of corruption investigations involving politicians, including the high-profile investigations into Netanyahu’s conduct. She believes the ongoing investigations “just emphasize how strong the Israeli democracy is.”

“No one is above the law, and I hope of course that all my colleagues from the government will come out clean,” Shaked said. “But I think the fact that there are investigations against ministers only emphasizes the strength of the Israeli democracy.”

Shaked does not believe that ongoing investigations will force the breakup of the current government.

“No, I don’t think there will be [early] elections,” she said. “The coalition is very strong. It will take a long time for the investigations to end, and if you ask me, I think that the elections will be [as scheduled] in 2019.”

Security and the Temple Mount

This past July, following an attack by Arab terrorists who smuggled machine guns onto the Temple Mount and killed two Israeli police officers, Israel’s security cabinet voted to install metal detectors and cameras around the perimeter of the site, only to remove them days later amid Arab rioting and political threats. Seventy-seven percent of Israelis disapproved of the cabinet’s decision to remove the metal detectors, according to a Midgam poll broadcast on Israel’s Channel 2.

Unlike the prime minister and the majority of the cabinet, Shaked voted to keep the cameras in place.

“I didn’t mind to remove the magnetometers, because they became a symbol [that Arabs in Israel and worldwide] rallied around,” Shaked said. “The police said that they needed cameras, and I also believed that it would be wiser to keep the cameras.”

Shaked noted she has “a collegial responsibility—as part of the cabinet—so I accept the majority decision.” But she believes the decision hurt Israel’s ability to prevent future attacks.

“In the Middle East, you need deterrence capability. If we remain strong, we will maintain deterrence,” Shaked said.

“I think that the majority of people in Israel, and the leadership, understand that today there is no possibility to have an agreement between Israel and the Palestinians,” said Shaked. “If you ask me, I think the two-state solution, and the Oslo agreement to begin with, is not realistic and is dangerous to the security of the state of Israel.”

Shaked said attempts during the past few decades to create Arab sovereignty over areas controlled by Israel have backfired.

“In every area that Israeli democracy was evacuated, then terrorist organizations took over,” she explained. “It happened in Gaza; it happened in south Lebanon. We are not going to try this experiment again in Judea and Samaria. The majority of the people are aware of that.”

Shaked argued that economic progress may be more important than diplomatic progress.

Regarding recent disagreements between American Jewish leaders and the Israeli government over the status of an egalitarian prayer section at the Western Wall, and other key Israel-diaspora issues, Shaked said it is “important to emphasize the strong relationship between the state of Israel and the United States, and in particular, between the Jews of Israel and the Jews of America.”

Regarding her future plans, Shaked wants to keep the public surprised.

When asked what new initiatives she is working on, she smiled with anticipation and said, “I can’t tell you yet. I have two big projects that I will announce in September or October.”

Can Shaked see herself as Israel’s second female prime minister, after Golda Meir? She laughed and said, “I don’t know. Up until now, I see myself [being] very happy as the minister of justice.”