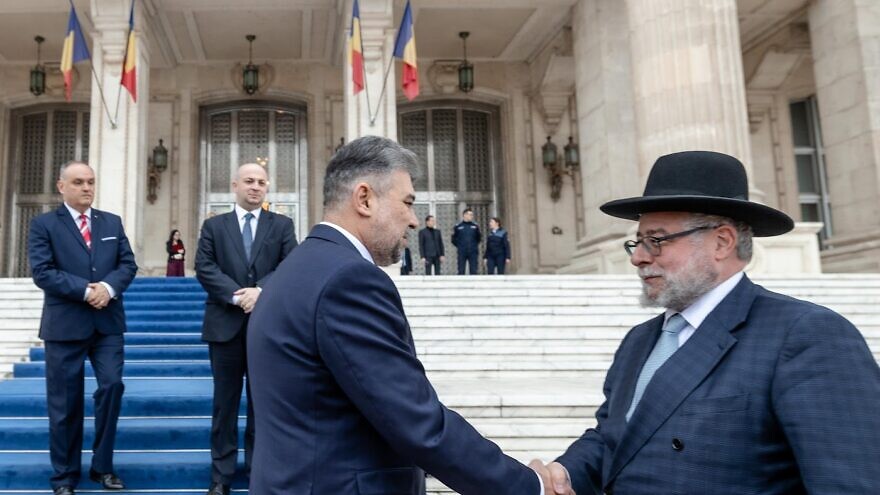 Marcel Ciolacu, president of the Chamber of Deputies, greets Rabbi Pinchas Goldschmidt, president of the Conference of European Rabbis, at the Palace of Parliament in Bucharest, Nov.15, 2022. Photo by Eli Itkin.
Spread the word.
Help JNS grow!
Share now:

(November 16, 2022 / JNS) Representatives of the Romanian government and the Jewish community celebrated the signing into law on Tuesday of legislation that protects the practice of shechita, the kosher slaughter of animals.

The move comes after some other European Union members have banned shechita in recent years, including Sweden, Denmark, Finland, Estonia, Slovenia, and Belgium (except for in Brussels).

Marcel Ciolacu, president of the Chamber of Deputies, the lower house of parliament, said, “I am proud to protect and support the Jewish community of Romania, and will ensure that their life can flourish and remain safeguarded. They can continue to produce and provide kosher meat, and to practice their faith freely.”

The legislation was signed by Ciolacu and Silviu Vexler, a member of the chamber and president of the Federation of Jewish Communities in Romania, in a ceremony attended by local officials as well as members of the Conference of European Rabbis, the primary Orthodox rabbinical alliance in Europe.

“This new law to protect shechita as a legal method of slaughtering animals for food stands as a shining symbol to other countries throughout the world, to protect Jewish communities and religious rights,” said Vexler, who credited the chief rabbi of Romania, Rabbi Rafael Schaffer, for his work to get shechita recognized.

Earlier in the week, the Federation of Jewish Communities of Romania hosted a gala dinner for community members, officials from the Conference of European Rabbis, and political, civic and community leaders in Romania, including Prime Minister Nicolae Ciuca.

The Jewish federation presented its Rabbi Moshe Rosen Prize to the Romanian Parliament in honor of the law. The Rosen Prize is named for the country’s longtime chief rabbi, who led the Jewish community for decades following the Holocaust until his death in 1994.

“The decision of the Romanian Parliament to enshrine in law the provision of kosher slaughter is greatly welcome. Romania has an established and important tradition, spanning several decades and even before this democratic age, of supporting Jewish life, be it Jewish education, yeshivas and communities,” said Rabbi Pinchas Goldschmidt, president of the Conference of European Rabbis.

“Now, with this law, Romania continues its noble path of support for its Jewish community,” he continued. “I hope that other leaders across Europe will follow the initiative of the Romanian Parliament, valuing and protecting the continued future of Jewish life on the European continent.”