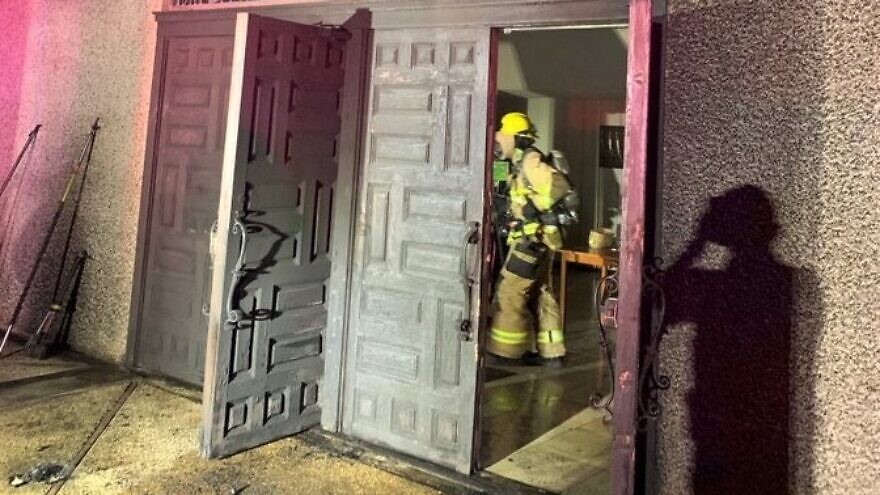 (November 2, 2021 / JNS) Arson investigators in Austin, Texas, are looking into the cause of a late-night fire at the city’s Congregation Beth Israel on Sunday evening.

According to the Austin Fire Department, it was a “small, exterior fire” that caused no injuries.

The Jewish community in Austin has been rocked in the last 10 days with several cases of anti-Semitism, including the anti-Semitic Goyim Defense League hanging a banner saying “Vax the Jews” over a major highway—the MoPac Expressway on the city’s west side—just a few blocks away from the Dell Jewish Community Center and several synagogues.

The group, headed by Jon Minadeo II, is a “small network of virulently anti-Semitic provocateurs,” according to the Anti-Defamation League.

It raised the banner on two separate occasions, the first on Oct. 23, a Shabbat afternoon.

AFD on scene of a small exterior fire at Congregation Beth Israel 3901 Shoal Creek Blvd. fire is out. No injuries. Arson investigators responding to assist with cause determination. pic.twitter.com/hgMvJNAk5o

Liora Rez, executive director of the group Stop Antisemitism.org, told JNS: “We stand in solidarity with the Austin Jewish community as they continue to be terrorized by white supremacist Jon Minadeo II and his ilk. Hate-filled words often manifest into hate-filled actions; we hope whoever is found responsible for Sunday’s synagogue fire will be prosecuted to the fullest extent of the law.”

The national office of the Anti-Defamation League posted on social media that its Austin branch is working with community leaders and investigators “to ensure that if this was an intentional anti-Semitic attack, those who committed it will be held responsible.”

Religious leaders of all faiths, law-enforcement personnel and local politicians gathered in Austin on Monday just hours after someone set fire to the exterior of a synagogue there.

“Our Jewish community is here as a partner one presence among many in a stunning coalition of backgrounds to call for a strengthening of moral respect in our community,” said Rabbi Neil Blumofe of Congregation Agudas Achim during the interfaith gathering on Monday afternoon. “In order to chase away the hate and violence with steadfast and dependable care and attention.”

Held outside B’nai Abraham, the oldest synagogue building in Texas, Blumofe said: “Let us continue to raise each other up by tending to friendship. … Let us never retreat from the opportunity we have to make our home in Austin a home in which we are proud.”

“As a native Texan, this hatred breaks my heart,” she said. “We will be compassionate and resolute because our love for humanity strengthens our resistance to hatred.”

“We will be OK,” she emphasized. “We will continue to flourish and thrive.”