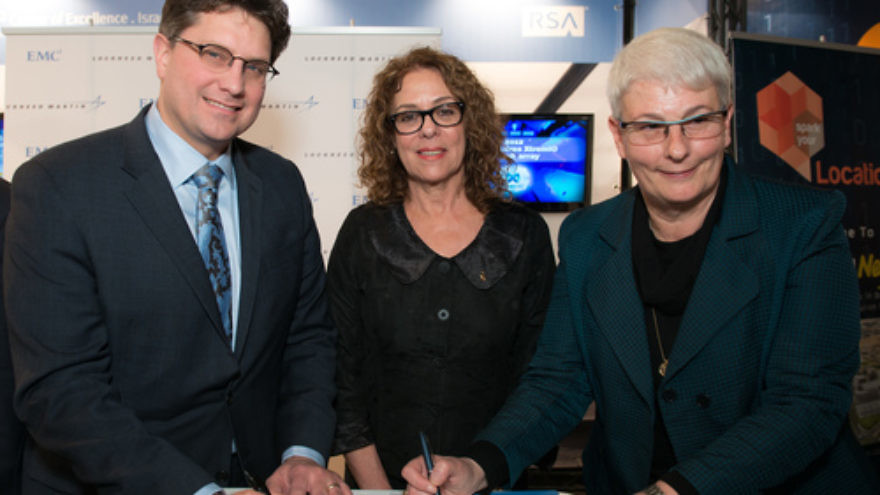 (January 31, 2014 / JNS) The southern Israeli city of Be’er Sheva has long been stigmatized by its peripheral location, economic instability, and poor public image. That reputation, however, is giving way to that of a comprehensive cyber-field ecosystem with all the components for global leadership.

On Jan. 27, Lockheed Martin and EMC Corporation announced their plans to invest in projects based in the recently established advanced technology park (ATP) in Be’er Sheva. The announcement took place in Tel Aviv at the CyberTech 2014 International Exhibition and Conference. Later in the week, IBM made a similar announcement.

Lockheed Martin and EMC intend to jointly develop and enhance partnerships with Israeli companies, the Israeli government, and academic institutions in Be’er Sheva, in order to explore and promote collaborative research-and-development projects in cloud computing, data analytics, and related cyber technologies. Under the arrangement, these global leaders will identify a series of development opportunities that can be contracted to Ben-Gurion University of the Negev (BGU) and other experts in the field. Local talent supporting the projects will commit to regular project reviews and deliverables schedules in their efforts to develop next-generation EMC and Lockheed Martin capabilities.

Although Lockheed Martin is the top IT-solutions provider for the U.S. government, the company’s 60-plus-year presence in the Jewish state has until now primarily focused on aerospace and defense endeavors. The ATP endeavor changes the nature of the relationship between Lockheed Martin and Israel.

“We can and have developed a lot of the [cyber security] capabilities and technologies ourselves, but we are looking for partnerships with others… to help us continue to not only build our business, but advance our capabilities,” Robert Eastman, defense and intelligence solutions vice president for Lockheed Martin, told JNS.org. “We look at Israel and we see a truly equal partner. It’s the capabilities they have, the understanding of the cyber threats and the ability—through the innovation available in the Israeli culture and workforce—to be able to develop the world’s leading cutting-edge projects.”

EMC currently employs more than 1,000 people in Israel and has invested billions in the country through the acquisition of nine Israeli companies, various investments in Israeli technologies, and the establishment of sales and R&D centers in seven locations in Israel. EMC expects its activity in Be’er Sheva to expand considerably.

This announcement was part of a larger discussion, led by Prime Minister Netanyahu, at the cyber event in Tel Aviv. The prime minister told the roughly 5,500 attendees from Israel and abroad that Israel intends to lead a coalition of willing countries to fight the forces that seek to “ruin the blessing of connectivity” that the Internet has provided. The major battleground will be the CyberSpark national cyber security complex in Be’er Sheva, part of the 15-building ATP.

“Be’er Sheva will not only be the cyber capital of Israel, but one of the most important places in the cyber security field,” Netanyahu said in a speech.

The groundwork for the project was laid over the past decade, according to Prof. Dan Blumberg, head of the homeland security institute at BGU. He said this southern success story begins in 2004.

“Back then, Deutsche Telekom … was looking at investing in securing data that would be transferred over cellular phones in the future. That brought them several placements; one of them was Israel,” Blumberg told JNS.org. “[The company] ended up investing in and opening up a research center at BGU that would focus on data security, which led to an agreement in 2006 where ‘T-Labs’ [Telekom Innovation Laboratories] were opened at BGU.”

Those labs led to a new group of BGU researchers focused on cyber security and then to the first-of-its-kind Master’s Program in Cyberspace Security. In the past few years, BGU saw the establishment of the first stages of the ATP, a joint venture between the university, the Be’er Sheva municipality, and private entrepreneurs. Simultaneously, the Israeli government made the decision to move most of the IT units of the IDF to the south. Then, two years ago, Israel established a national cyber bureau to coordinate defense against attacks on the country’s infrastructures and networks, and to boost Israel’s economy by building up its cyber defense industry. In the last few years, the number of Israeli cyber defense companies has ballooned from a few dozen to more than 200, accounting for five to 10 percent of the global cyber security industry. Israel faces roughly 100,000 cyber attacks per day, and during wartime that number jumps to one million, Israel National News reported last summer.

“We are in a very good position,” Blumberg told JNS.org, noting that the expansion of the ATP and the new investments in what will be a center of excellence in cyber security will generate jobs in the south and keep graduating students in the area.

“In LA you have Silicon Valley. In Berlin, Silicon Allee. In Be’er Sheva, you will have Silicon Wadi,” said Blumberg.

The model—strong synergy and collaboration between a university, government and private developers—is not new, though it is new to Israel. Gabe Goldhirsh, CEO of Columbia, Md.-based Synerjent, LLC, likened the new model to government-industry-academia partnerships available through institutions such as Massachusetts Institute of Technology and Johns Hopkins. He told JNS.org that he attended the Tel Aviv conference in hopes of “facilitating the bringing of Israeli technologies proven within the intelligence community in Israel to the U.S. and making them accessible to protect the U.S. government and commercial corporations.”

Steve Keef, founder and president of the Fredrick, Md.-based Patriot Technologies, had a similar agenda. The day after the conference ended, he said he was already interviewing Israeli cyber companies to try to identify new and innovative technologies to bring to the U.S. market.

Keef has been working with Israelis for 10 years, and said the country is “extremely innovative,” but in a different way than others he works with. He told JNS.org that Israeli scientists think outside the box, sighting an example of a neurologist who used his research in detecting anomalies in the brain for a new approach to malware detection.

Also at the conference was Maryland’s new cyber security director, Jeffrey Wells. Under the leadership of Gov. Martin O’Malley, Maryland is trying to become the epicenter of cyber technology in the U.S. Wells said the “collaboration and foresight that O’Malley had to create a strong and positive relationship with Israel and Israeli companies” would serve Maryland well. He said Maryland is presently focused on identifying traditionally underrepresented populations to engage in the cyber arena.

“When I arrived at the conference and saw over 50 percent of participants were female, it gave me great hope that we can begin in Maryland to create new opportunities for women and other underserved populations,” Wells told JNS.org.

The Maryland-Israel Development Center’s Peter Telem said his organization has already taken a tour of the ATP, and has begun meetings with BGU to further collaboration.

Added Lockheed Martin’s Eastman, “We are really excited to be a part of everything that is coming together in Be’er Sheva. … What we really like about Israel is just that they are good. … They raise our game.”

Maayan Jaffe is a freelance writer based in Overland Park, Kan.