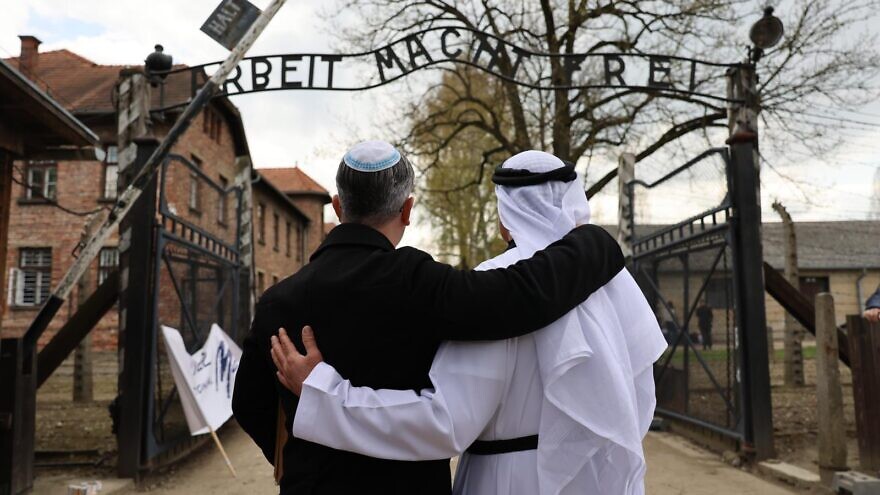 Eitan Neishlos, whose grandmother survived the Holocaust, and Ahmed Obaid Almansoori, who established the first Holocaust exhibit in the Arab world, at the March of the Living, April 28, 2022. Photo by Tali Natfob.
Republish this article
1739 WORDS
Spread the word.
Help JNS grow!
Share now:

(April 29, 2022 / JNS) The 34th International March of the Living featured religious figures and political leaders, including Polish President Andrzej Duda, who made a surprise, last-minute decision to join. They walked alongside a large Israeli delegation from Jerusalem led by Mayor Moshe Lion, carrying a Torah scroll, in addition to numerous organizations and youth groups. But what stood out was that the most influential group was also the smallest.

Only seven Holocaust survivors participated in this year’s march, down from 70 in 2019, the last time the event was held live after a two-year hiatus due to COVID-19. There were supposed to be eight, but one dropped out due to illness, underscoring the dilemma of the event’s organizers—how to preserve Holocaust memory without its most effective ambassadors as those who experienced the horrors of the Nazi camps firsthand pass from the scene.

“To those blessed to survive and to share with us your stories, your lessons, we thank you,” Phyllis Greenberg Heideman, president of International March of the Living, told the audience of roughly 3,000. “We shall remember your words of wisdom, your guidance, your unsurpassed strength and we shall always remember you.”

Heideman invited the next generation to “accept the social and political responsibility” to “carry the torch of memory into the future.”

Shmuel Rosenman, chairman of March of the Living, told JNS that the third generation is taking an active part. … How strong it is, I don’t know. But I can assure you of one thing. If we’re not transmitting the torch, in a couple of years it’s going to be history versus history and then it’s going to be a major problem.” 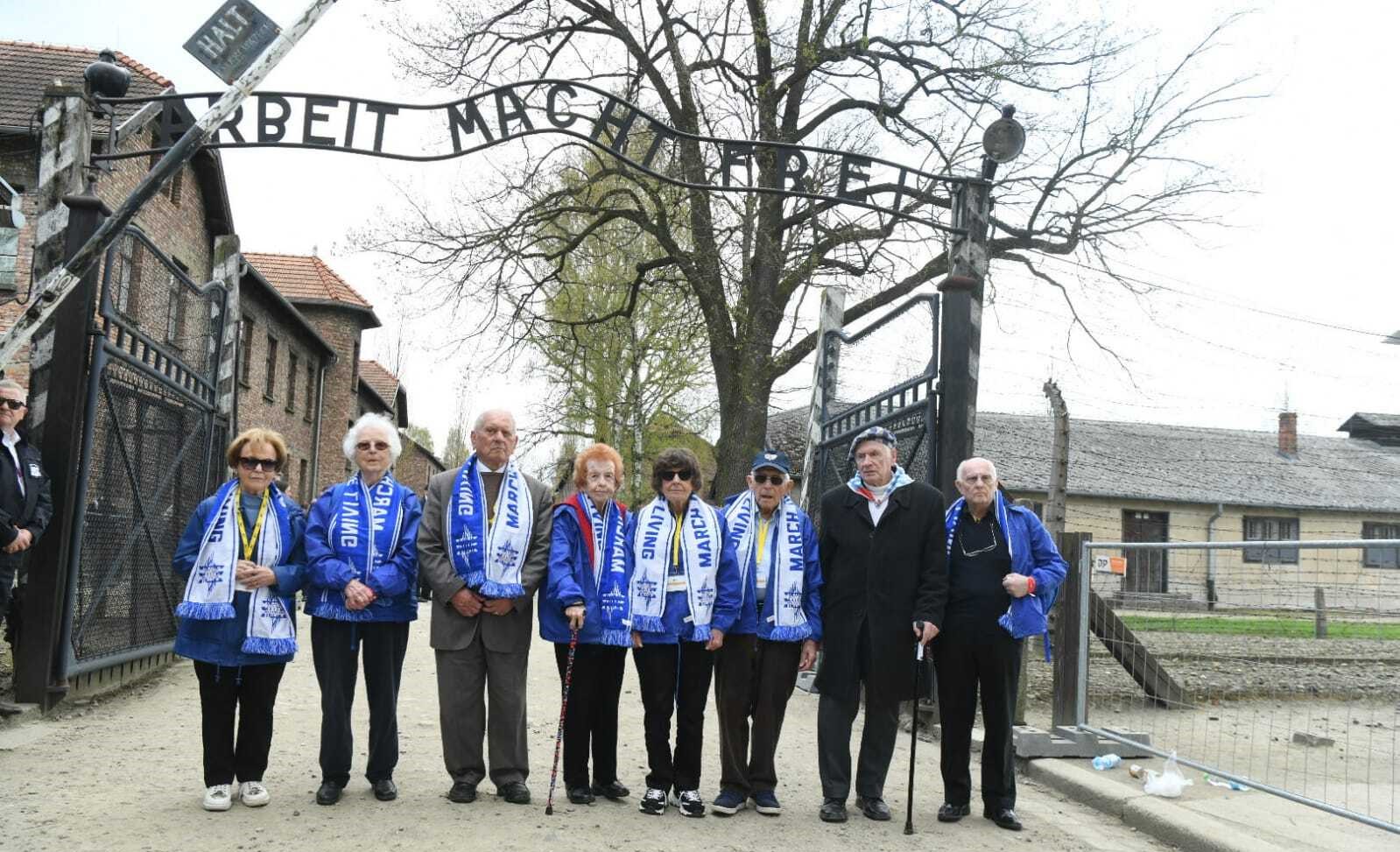 The Holocaust survivors who attended the International March of the Living, April 28, 2022. Photo by Yossi Zeliger.

By “history versus history,” he was referring to the increasing spread of Holocaust denial, which is expected to gain in strength as a counter-narrative to history.

The march, which takes place annually on Israel’s Yom Hashoah—or Holocaust Martyrs’ and Heroes’ Remembrance Day—was scaled back due to Russia’s war in neighboring Ukraine. Even so, more people came than expected, and spirits were high as Israeli youth groups sang songs during the 1.9 miles from Auschwitz, with its haunting Arbeit Macht Frei (“Work sets you free”) sign, to Auschwitz-Birkenau, the extermination camp where 1.2 million people—90% of whom were Jews—were murdered by the Nazis.

On the route, marchers passed “the ramp,” the arrival platform where Nazi SS officers, the most infamous of whom was Josef Mengele, selected those to be sent straightaway to the gas chambers and those who were to be slowly worked to death.

Auschwitz has become the symbol of the Nazi German effort to annihilate the Jewish people; it was the largest of the concentration camps and is relatively well-preserved. A more dramatic setting for a Holocaust remembrance ceremony—a stage set between the ruins of Crematoriums II and III—is hard to imagine. As former Israeli Chief Rabbi Isaac Meir Lau, himself a child survivor, wrote in his book Out of the Depths, the March of the Living is a “statement to emphasize Jewish stubbornness, perseverance and power of survival in that very location. Precisely in that place, we must demonstrate that Am Yisrael Chai—the Jewish nation lives—and it has a future.”

The former chief rabbi was to have attended the March of the Living but personal family reasons prevented him from doing so. His son, Rabbi Moshe Chaim Lau, came in his stead. He told JNS that he is “in no way” worried that the memory of the Holocaust will be forgotten, noting that Jews are strong when it comes to remembering.

“We remember Abraham, Isaac and Jacob. We remember King David,” he said.

“More than 3,300 years ago, we left Egypt. Everyone is obligated to feel as if he himself came out of Egypt. We have different activities during the seder, and during the entire Passover holiday and throughout the whole year. We remember leaving Egypt twice every day in the reading of the Shema prayer—‘who brought you out of the land of Egypt’—in order to stress that, from our perspective, we are striving to experience it. Of course, it’s impossible to experience it in the way someone who has experienced it personally, but it is possible to try,” he said.

Ironically, given the continuous efforts by his father to preserve the memory of the Holocaust, Lau said his father never talked about it at home. He and his siblings learned about his father’s experiences only from speeches, lectures and comments he made to others, and from what others said about him, “but from him in the home, nothing.” The rabbi said he assumes his father wanted to protect his children from trauma that might result from learning what he had endured. Rabbi Moshe Chaim Lau attended the March of the Living in place of his father, former Chief Rabbi Israel Meir Lau, a child survivor of the Holocaust, April 28, 2022. Photo by David Isaac.

‘I put my attention on people who are willing to learn’

Plenty of evidence supports Lau’s assertion that a new crop of leaders will emerge to pick up the mantle of the survivors and preserve the memory of the Holocaust. Evangelical Christian leader Mike Evans, who participated in this year’s march, told JNS in Krakow, a Polish city about 45 miles from Auschwitz, that it is essential for Christian leaders to, “combat anti-Semitism, educate and activate believers, Christians.”

Eitan Neishlos, 42, is among the most prominent of the third-generation leaders. His grandmother was a survivor, saved by a Christian family who ultimately paid with their lives for protecting Jews. Neishlos founded the Neishlos Foundation with its central mission on Holocaust education. He looks for innovative ways to approach the material, making unusual partnerships, such as with a descendant of a Nazi.

Neishlos was given the honor of lighting one of the six commemorative torches at the conclusion of the ceremony at Auschwitz-Birkenau. He shared the honor with Ahmed Obaid Almansoori, an Emirati who founded the first Holocaust exhibit in the Arab world, part of his Crossroads of Civilization Museum. Neishlos has partnered with Almansoori to foster understanding between Jews and Muslims; he has even relocated to Dubai in the United Arab Emirates. Perhaps the most surprising of third-generation leaders at this year’s march was a group of Arab Israelis, both Muslim and Christian, ranging in age from 16 to 21, who participated in the march for the first time. The name of their youth group is Atidna, a play on words combining the Hebrew for “future” with the Arabic for “a strong position.”

Suleiman, one of the participants and an Atidna youth leader from the Arab village of Tamra in northern Israel, told JNS that the goal of the group is to learn about the Holocaust and return to teach other Arab Israelis. He refers to Jews as his “neighbors” and “partners.”

Moran, 19, is another Atidna youth leader. She comes from a Bedouin village in northern Israel. She told JNS that visiting Yad Vashem, Israel’s national Holocaust memorial museum, which she did for the first time only a month ago instilled in her the desire to visit Auschwitz.

She said she was “shocked” by everything she saw. “It’s insanity. Why would anyone do such a thing? And why to Jews?” she said, adding she expects more and more Arabs to come to Auschwitz. “We need to learn what Jews went through.”

Moran participated in Sherut Leumi, or national service, typically an alternative to army service for Orthodox Jewish girls. She said she wasn’t required to do so but felt “obliged” to Israel, saying she completely identifies with the country. Jerusalem Mayor Moshe Lion holds a Torah scroll during the March of the Living, April 28, 2022. Photo by David Isaac.

‘It was dreadful, absolutely dreadful’

While it is encouraging, even inspiring, to see young people taking an interest in Holocaust history, when speaking to survivors, it becomes abundantly clear that something irreplaceable will be lost with their passing. JNS spoke with several prior to the march.

Arek Hersh, 94, came from the central Polish town of Sieradz near Lodz. (Of the 5,000 Jews in his town, only 40 survived.) He was 11 when the Nazis killed his parents. His older sister survived by fleeing to Russia. (After the war, she would make it to the United States.) Hersh was in several concentration camps, including Auschwitz.

During the trip, he visited the very same barracks he suffered in during the war. “In Auschwitz, it was dreadful, absolutely dreadful,” he said, recalling the worst part was watching people hung or shot. “The Germans were so barbaric, so inhuman. I’ve never seen any country being so barbaric as they were,” he said. “It was starvation, beatings behind barbed wire. It was just unbelievable.” Shmuel Rosenman, chairman of the March of the Living, April 28, 2022. Photo By David Isaac.

Hersh would eventually be liberated at the concentration camp of Theresienstadt in Czechoslovakia.

After the war, Hersh, then 15, made it to England with a group of 300 orphans (they later became known as the Windermere children). He stayed at Lake Windermere for six months. At one point, he was given the choice of working in a coal mine or a mill; he chose the mill. He would later work as a mechanic and eventually end up in real estate. He confided that when Israel’s War of Independence broke out, he went to Israel for a few months to fight. He made the journey in secret and then returned to England.

As for the survivors dying out, said Hersh, “you can’t help it. People die, and the memory goes with them. Unfortunately, after a certain time, people forget. But I’ve never forgotten. I’ve done what I can. I’ve written a book called The Detail of History. I’ve given it to the Holocaust Museum in Nottinghamshire. I sell quite a lot. The money goes to charity. I also go around to schools to talk.”

He said of his grandchildren that some take an active role and some don’t. “Children of the third generation are not very helpful as far as that’s concerned,” he said. “They don’t go around to schools to talk. The talking I’ve got to do,” he said.

Hersh has also spoken in Germany. “The Germans sit there with their heads down. They do believe what their ancestors did. So in that respect, that’s all you can do. You can’t do anything to the ones that were born after the war.”