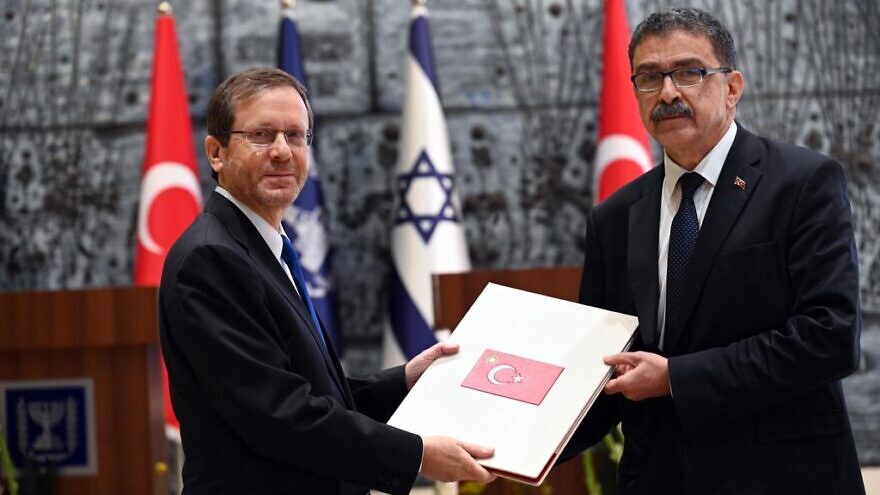 (January 11, 2023 / JNS) President Isaac Herzog on Wednesday accepted the credentials of Ankara’s new ambassador to Israel, Şakir Özkan Torunlar, who was named to the position in October.

The Turkish diplomat, who served as consul general in Jerusalem (and “ambassador” to the Palestinian Authority) between 2010 and 2013, assumes the position four years after President Recep Tayyip Erdoğan withdrew Turkey’s ambassador from Israel and ousted Jerusalem’s top envoy amid fighting between the IDF and Palestinians along the Gaza border.

“It is no secret that the State of Israel attaches great importance to our historic relationship with Turkey, as do I personally. It is a relationship that has known crises in the past but is now, to our delight, on a very encouraging trajectory. Israel and Turkey can and must cooperate in many fields that will bring progress and growth for both countries and both nations,” said Herzog during a ceremony at his official residence in Jerusalem.

“President Erdoğan has underscored in the past year, including in conversations with me and publicly, how deeply he recognizes the importance of the partnership between Israel and Turkey, and I would like to take this opportunity, as president of the State of Israel, to invite President Erdoğan to visit Israel, which I am sure will contribute to deepening the ties and cooperation between our countries,” Herzog added.

Jerusalem and Ankara announced in August the restoration of full relations, with then-Israeli Prime Minister Yair Lapid saying that the move would “contribute to deepening ties between the two peoples, expanding economic, trade and cultural ties, and strengthening regional stability.”

In December, Israeli Ambassador to Turkey Irit Lillian presented her credentials to Erdoğan, taking up a post that had been vacant for four years.

Herzog was also slated on Wednesday to receive the credentials of the new ambassadors from Australia, South Korea, the Philippines and El Salvador.