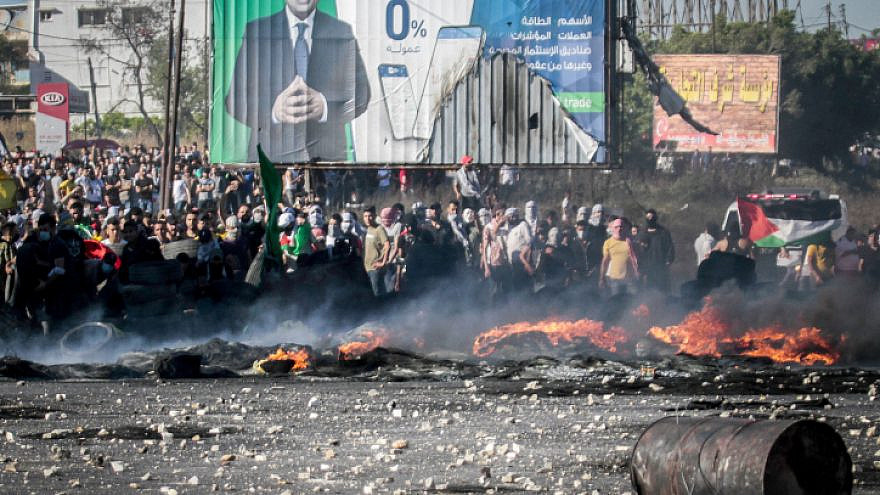 (May 19, 2021 / Israel Hayom) Two Israeli soldiers were wounded and one Palestinian died as thousands rioted throughout Judea and Samaria during Palestinian “Day of Rage” events on Tuesday. Multiple arrests were made following the riots, which were a show of solidarity with Hamas on the ninth day of fierce fighting between the terror group and the Israeli military.

Two large protests were held during the day, including one in eastern Jerusalem, and there were several terrorist attacks, as well as some 40 cases of arson.

Fires were set in the Ein Prat Nature Reserve near Jerusalem and in several locations throughout Judea and Samaria, while in Hebron, a suspected member of the Palestinian Islamic Jihad terrorist organization died during an attempt to carry out an attack against Israeli forces.

Several hours later, several thousand Arabs rioted near Beit El, one of whom opened fire at Israeli troops nearby. Two Israeli soldiers were wounded, and one Palestinian was killed when other troops on the scene returned fire.

Violent demonstrations were also held in the Jerusalem neighborhood of Sheikh Jarrah, where several hundred youths chanted terrorist slogans, with some hurling rocks and launching fireworks at Israeli troops nearby.