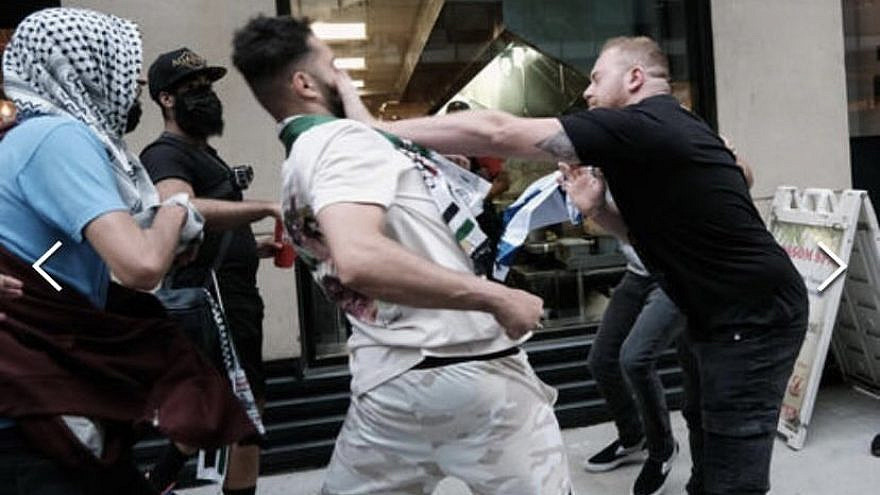 (May 27, 2021 / JNS) Snir Dayan and Amit Skornik were hoping for a quiet bagel breakfast last week on a typical day in New York City. But instead, a group of pro-Palestinian protestors tried to punch some holes in them close to 52nd Street and Third Avenue in Manhattan in front of Ess-a-Bagel. It was one of several recent attacks against Jews in New York City by Palestinians or Palestinian supporters, but this time, it turned out a bit differently. Dayan, 27, and Skolnik, 26, were trained in Krav Maga, and both served in the Golani Brigade of the Israel Defense Forces.

“New York is the most diverse city in the world, we didn’t think this would happen here,” said Dayan by phone. “If Jews are afraid to walk in the city because they will be attacked, it’s not New York City anymore.”

The friends, who moved from Israel to New York five years ago, said they originally decided to have a quiet protest by showing an Israeli flag. However, when they saw there were about 500 Palestinians on the street, they decided at that point it would be better to just have breakfast.

“We came on a motorcycle, and I told Snir in Hebrew to put the flag in the helmet so it won’t be seen cause they might destroy his bike,” Skornik said by phone.

Dayan said someone must have heard Skornik speak Hebrew and gone to get people from the crowd because after a few seconds, 30 or more people were staring them down, and a few engaged to fight.

“They threw the first punch, and one big guy hit me in the chin,” related Dayan. “I am happy first that they chose to attack people who were capable of defending themselves, and I’m happy I was with Amit, who knows how to defend himself. Had I been with a friend who wasn’t trained, it would have been a much different result.”

Video of the attempted assault on the two Jewish men. pic.twitter.com/3iEIIHfupV

Skornik, who said his grandfather, Gadi, is famous in Israel for teaching Krav Maga, and that his father teaches as well, moved his head when an object was thrown at him. He said he and his friend knew there were certain things they had to make sure of.

“The first thing is ‘never give your back to your opponent,’ so we couldn’t run away,’ ” explained Skornik. “It’s a tactical mistake people make. The second thing was to make sure we didn’t get knocked to the ground no matter what. The third thing is to be calm in your mind, be super aggressive in your attack and throw punches to scare the attacker. Once they saw that we knew how to fight, only about six of them had the balls to come at us, while the bigger group was screaming behind them.”

Video footage of the attack shows one man pushed a police officer and punched Skornik in the face. He also said they were called “Zionist Pigs” and “Dirty Jews.”

“I have a lot of appreciation for the New York City Police Department,” said Dayan. “They don’t get the respect they deserve. But in this case, how do you let a guy push you, and you see him punch someone in the face and don’t arrest him? You just say ‘stop it?’ That’s assault.”

‘It was a case of self-defense and survival’

Ironically, it was Dayan who was handcuffed and arrested, but eventually let go. Skornik reported that since Dayan’s shirt was ripped in the ordeal, it was likely easier for them to arrest him. Skornik said he didn’t think any in the Palestinian group were arrested, while Dayan said maybe one was.

Dayan added that he saw a news reporter get attacked by a Palestinian supporter and a police officer didn’t arrest the attacker and just picked up the reporter.

“At the police station, there was a very nice NYPD officer who said, ‘We’re not trying to solve the world’s problems, we’re just trying to keep the city streets peaceful,’ ” recounted Dayan. “I explained that we are not crazy. Two people are not going to attack 30 people with 500 more in the street. It was a case of self-defense and survival, and they realized that and let me go.”

Skornik said when the police came on the scene, he and his friend stopped attacking but the Palestinians did not. Dayan said he’s not sure if he will file any charges.

The two said they are also not sure who took the video footage; they found out the next day and got many comments of support. Skornik said it was a good thing that the NYPD arrived at the scene.

“If not, a lot of them would have had broken bones, and as for us, I think we could have held them off for maybe five minutes—then I don’t know what would happen to us,” he acknowledged.

He added that both social media and regular media were perpetuating harm by not identifying Hamas as a terrorist group both before, during and after two weeks of rocket attacks against civilian Jewish population centers. The result, he said, has been attacks against Jews in New York City and other cities in America—and around the world.

Dayan said if anyone wants to create a false narrative about him, it will be a lie.

“I’m a proud Jew and a proud Israeli,” said Skornik. “Nobody is gonna tell me I have to be afraid to walk in New York City.”

“The first message is to Palestinians in New York and everywhere,” he said. “We don’t hate you. We want to live peacefully. Wake up. We hate Hamas, who does not want people to live peacefully. The second message is to Jews. Wake up. You see that you have to fight back. You can’t show weakness because this will result only in more attacks. I’m hoping for peace for all New Yorkers, and if possible, for everyone in the world.”