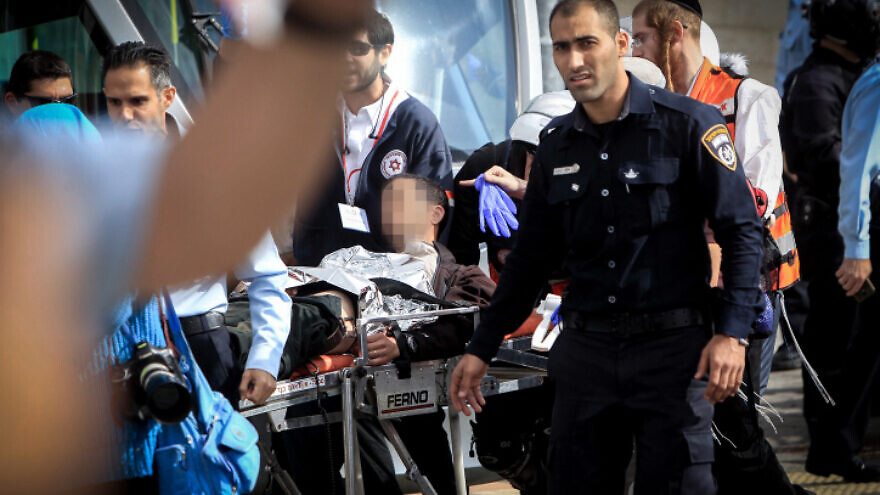 Israeli medics and emergency personnel evacuate a wounded Israeli from the scene of a stabbing in the Jerusalem neighborhood of Pisgat Zeev. Nov. 10, 2015. Photo by Muammar Awad/Flash90.
Spread the word.
Help JNS grow!
Share now:

On Oct. 12, 2015, in an attack caught on security cameras, Ahmad Manasra, who was then 13 years old, and his cousin, Hassan Khalid Manasra, 15, both residents of Beit Hanina, stabbed a 13-year-old boy and a security guard outside a candy shop in Jerusalem’s Pisgat Ze’ev neighborhood.

The younger victim sustained critical wounds, and since the attack has suffered from mental-health problems. The security guard suffered serious wounds.

Ahmad Manasra was originally sentenced to 12 years in prison, which was shortened to nine and a half years after his case was appealed to the Supreme Court. He is due for release in approximately two and a half years.

Recently, the Israel Prisons Service transferred Manasra to a psychiatric hospital due to suspicions that he was attempting to harm himself. His lawyer claims Manasra is schizophrenic, in a psychotic state and wants to die.

“Ahmad’s imprisonment for almost six years has deprived him of childhood, family environment, protection, and all the rights he should have been guaranteed as a child,” said a post on the official Facebook page of the U.N.’s Geneva headquarters.

The post does not mention why Manasra is in prison.

“This case is haunting in many respects and his continuous detention, despite his deteriorating mental conditions, is a stain on all of us as part of the international human-rights community,” the post states.