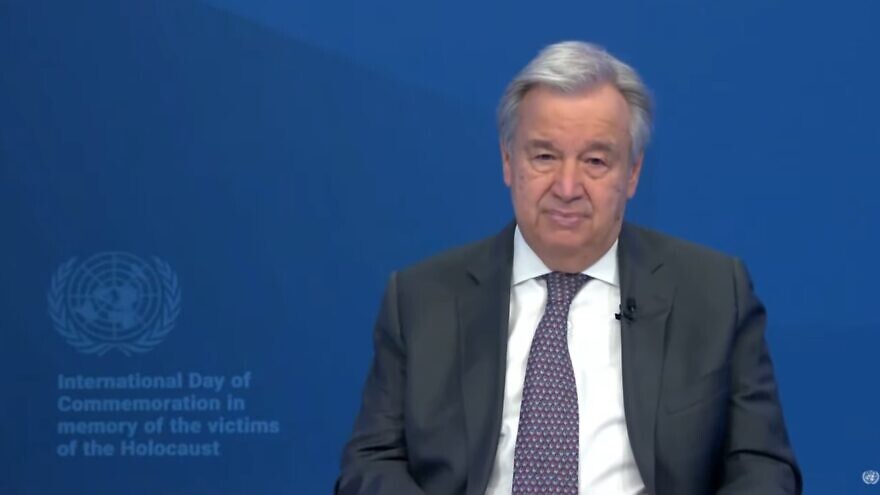 (January 27, 2022 / JNS) NEW YORK, N.Y.—Some recited the now-familiar vow, “Never Again.” Some called for the lasting comfort of those who survived. One even called out the United Nations itself for its injustices towards Jews.

Thursday’s annual International Holocaust Remembrance Day, held virtually by the United Nations’ Outreach Programme on the Holocaust, was titled “Memory, Dignity & Justice,” and the speakers ran the gamut through all three categories.

“The phrase ‘Never Again’ rings hollow unless we use the past to take the measure of our own time. What we see today must worry us—and jolt us into action. A resurgence of Holocaust denial. Attempts to rewrite history. Efforts to whitewash and rehabilitate people who committed crimes against humanity. Meanwhile, survey after survey shows increasing ignorance among young people about basic facts of the Holocaust. Ignorance goes hand-in-hand with indifference towards intolerance,” said Guterres.

Israeli Ambassador to the United Nations Gilad Erdan noted last week’s passage by the U.N. General Assembly of a historic resolution to define and combat Holocaust denial but marked it as a starting point, rather than the completion of the initiative that Erdan deemed his most important in New York.

“Last week, the General Assembly adopted our initiative to effectively fight Holocaust denial and following our discussions with Secretary-General Guterres, I was pleased to hear him today adopting and applying the IHRA [International Holocaust Remembrance Alliance] definition of anti-Semitism in the U.N. bodies. Making sure that the U.N. is taking these historic steps to fight anti-Semitism has been my top priority, yet there is still much more to be done,” said Erdan, who recounted the story of his grandfather, Chaim, a Transylvanian Jew whose wife and seven of his eight children were exterminated by the Nazis. Chaim survived, remarried and moved to Israel.

“The State of Israel rose up from the ashes of humanity’s darkest moment, and ‘Never Again’ is woven into its very ethos. But the Jewish state is not a result of the Holocaust, rather the living promise that such atrocities will never happen again,” said Erdan.

U.S. Ambassador to the United Nations Linda Thomas-Greenfield called for dignity for Holocaust survivors and their heirs, urging countries to make sure survivors are cared for; that their stolen property is returned; and that governments use diplomatic leverage to ensure it happens. Last year, the United States condemned a new Polish law that effectively put an end to most legal claims for properties confiscated after World War II.

“We must act with urgency to support Holocaust survivors, who are leaving us every day. Countries where the Holocaust occurred—and where Nazis plundered and stole—have an obligation to ensure that Holocaust survivors and their heirs receive justice through restitution and compensation. Those countries that haven’t completed this work must do so before time runs out. All survivors of the Nazi regime should be able to live out their days in dignity, security and comfort, and all nations have some influence and leverage they can put to use toward these ends,” said Thomas-Greenfield.

‘I realized that I wanted to live’

Noted anti-genocide activist Elisha Wiesel, the only child of Holocaust survivors Marion and the late Nobel laureate Elie Wiesel, blasted the lack of urgency by the United States to save Jews during the war and the lack of will by the United Nations to halt modern-day genocide.

“How must it have felt to learn after the war of Breckinridge Long, the U.S. assistant secretary of state in charge of visa disbursement, who pushed [U.S. President Franklin Delano Roosevelt] FDR to keep American shores closed to Jewish refugees, to learn that the Allies knew about Auschwitz and chose not to bomb the rail lines or even broadcast a radio warning to Europe’s Jews that they should not, under any circumstance, get on the trains,” said Wiesel.

He took issue with the U.N.’s hyper-focus of criticism and condemnation of Israel, while virtually ignoring China’s Uyghur concentration camps, and Iran’s repeated genocidal statements and other past atrocities, such as in Darfur. Wiesel said that, as a matter of justice, he believed it was up to him to carry on his family’s legacy.

“I feel I must do something to honor and continue the Jewish life of my ancestors, and to speak up against the anti-Semitism that nearly extinguished us,” he said.

A number of Holocaust survivors and their descendants gave personal testimonies of their experiences. Ella Blumenthal, a native of Warsaw, was sent to the Warsaw Ghetto in 1940 and surviving the 1943 uprising there. The Nazis deported Blumenthal, her father and her niece, Roma, to the Majdanek death camp. Her father was beaten on arrival and never seen again.

“I realized that I wanted to live,” she said. “I wanted to survive. I wanted to tell the world what has been happening—what happened to us Jews. And that is what kept me going, and the faith of G-d and the strength of survival. I hoped that I would manage to get through it, to come out alive.”

The Jan. 27 tribute kicked off with a concert by the U.N. Chamber Music Society, featuring music by Jewish composers, along with special performances from Argentine-Israeli Maestro Daniel Barenboim’s West-Eastern Divan Orchestra, and artwork by Israeli New York-based artist Roy Nachum. The main ceremony was followed by a virtual seminar titled “Legacy of Medicine During the Holocaust and Its Contemporary Relevance,” which was geared towards health-care professionals in an effort to have them reflect on their core values in patient care.