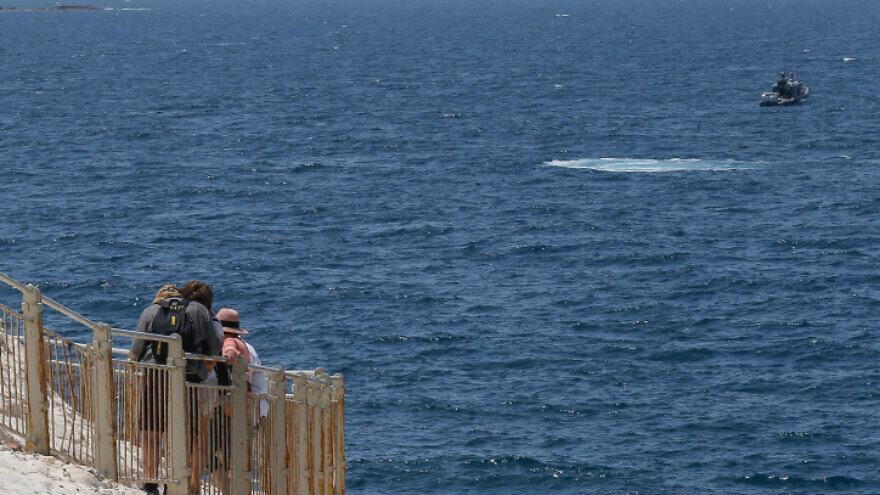 (February 8, 2022 / JNS) In recent days, Lebanese President Michel Aoun told a U.N. envoy that his country is ready to return to indirect negotiations with Israel over the maritime border between the two countries.

The developments represent an American push to seal a border agreement as part of Washington’s overall desire to get additional gas to Lebanon, Maj. (res.) Tal Beeri, head of the research department at the Alma Center, a defense research center in northern Israel, told JNS.

“The Americans are pushing strongly for an agreement,” he said.

Last year, regional Arab states and the United States hammered out the details of a plan designed to rescue Lebanon from its severe energy crisis by transferring Egyptian natural gas to Lebanon via pipelines that run from the Sinai Peninsula into Jordan and through Syria to feed Lebanon’s Deir Ammar power plant, which has a 450-megawatt capacity. In addition, according to the plan, Jordan will link its electrical grid to Lebanon’s via Syria to increase the power supply.

Aoun’s announcement comes after Lebanon once again found itself “on the bench” on the issue of underwater gas reserves as other regional actors finalized maritime borders and secured their access to such resources, said Beeri, who served for 20 years in the Israel Defense Forces Military Intelligence Directorate.

“Lebanon has been out of the economic waters game for a long time. The Syrians have ‘taken a bite’ from gas reserves to the north—and the maritime border between Syria and Lebanon has never been finalized,” noted Beeri. 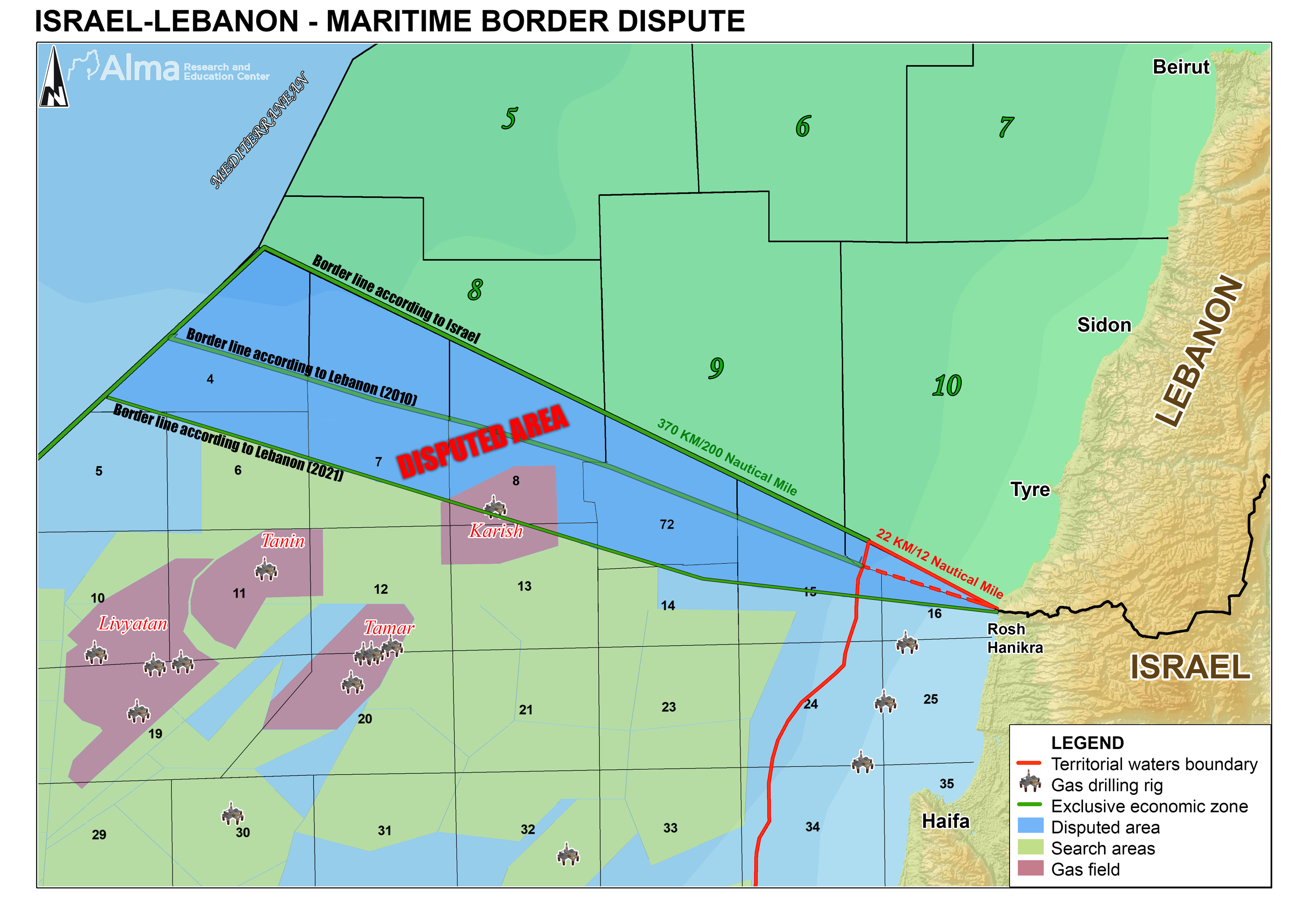 A map illustrating the area under contention between Israel and Lebanon. Credit: Alma.

Instead, Lebanon demarcated its maritime borders independently in 2011, causing a rare complaint from Syria in 2014 to the United Nations over the issue.

Since then, “no one in the Lebanese government has dared confront the Syrians,” said Beeri. “The Syrians have conducted gas searches, and no one in Lebanon, including Hezbollah, has said a word. The only exception is the protest over the matter by the head of the [Christian Lebanese movement] Lebanese Forces, Samir Gaegae, in 2021,” he stated.

Syria and Russia are not the only winners from this situation; Hezbollah is likely to receive “gas coupons” from discoveries in the area from Syria’s Bashar Assad regime in the event of a discovery of a gas field.

‘Not a green light to normalization with Israel’

Meanwhile, Lebanon has found itself shut out from other regional arrangements as well due to its paralysis. In 2010, Israel and Cyprus reached a former maritime border agreement, giving Cyprus access to the Aphrodite gas reserve.

“Lebanon did not want to take part in this due to Israel’s involvement; hence, it stayed outside of the talks,” said Beeri. Now, Beirut finds itself able to complete for only one maritime area—the sea zone to its south, in which the Karish gas field exists.

Beeri noted that the country “decided that in order to avoid losing again, it had to make its stance extreme.”

That approach has resulted in Lebanon demanding a southern maritime border in 2021 that is far south of the line it presented in 2010. The line “just happens” to run halfway through the known Karish gas-field zone—meaning that if the demand is expected, Lebanon can hire companies to simply arrive and begin drilling, skipping over the lengthy search stage, pointed out Beeri.

Hezbollah, for its part, has allowed the Lebanese government to take part in indirect talks, primarily for economic reasons.

“It is clear that some of the gas profits will ‘drain’ into Hezbollah’s accounts,” said Beeri. “In addition, politically, it does not want to be remembered as the side that blocked Lebanon from reaching gas. Hence, suddenly, it strikes ‘moderate’ stances and allows negotiations after Lebanon has faced years of economic crisis that is directly influenced by Hezbollah’s activities.”

Although Hezbollah chief Hassan Nasrallah routinely accusing Israel of stealing Lebanese resources, including gas, the Lebanese terror organization has left the issue under the portfolio of the Lebanese government.

Its chief concern, Beeri said, is to make it known that it is not a side to the negotiations with Israel and to market itself as the defender of Lebanon’s borders.

“Hezbollah always stresses that the negotiations are part of a national Lebanese requirement, but are not a green light to normalization with Israel,” said Beeri. “Hezbollah is telling itself a story that this is purely a military-technical issue, not a normalization affair. That there are no political ties between Israel and Lebanon.

“When Lebanon’s former Foreign Minister, Jubran Bassil, the head of the Free Patriotic Movement and the nephew of President Aoun, offered in April 2021 to speed-up talks by investing together with Israel in a third-party company to search for gas, he was strongly reprimanded by Hezbollah,” noted Beeri. “Hezbollah wants to dance at two weddings—to say that it is present on this issue, but also that it is absent.”