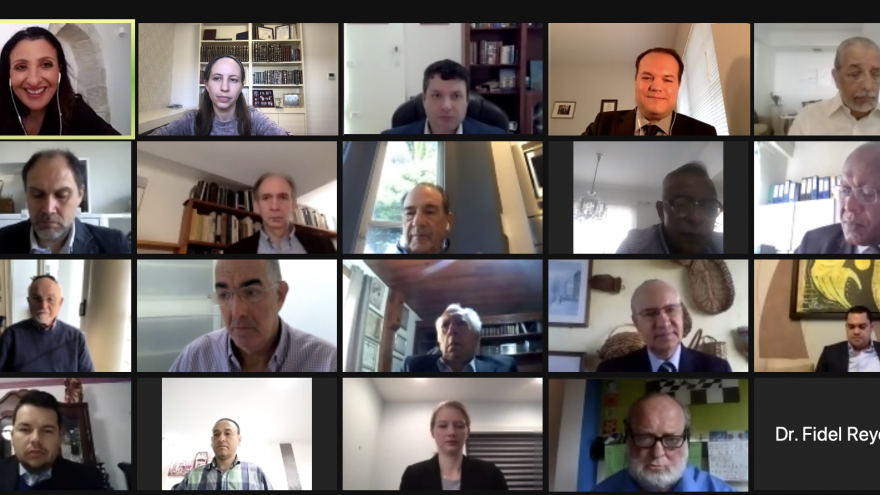 (February 10, 2021, JNS Wire) Over twenty Spanish speaking legislatures gathered for an online conference organized by the Israel Allies Foundation (IAF). The countries that were represented included the Dominican Republic, Venezuela, Uruguay, Guatemala, Argentina, Colombia and Honduras. Each legislator who participated is a member of the Israel Allies Caucus in their country’s parliament, which looks to strengthen the ties between their country and Israel.

Knesset Speaker Yariv Levin opened the conference by speaking to the participants in Spanish, sharing words of gratitude for their staunch support for Israel. “I would like to express my cordial greetings to the esteemed Latin American political leaders that are attending the Israel Allies Foundation virtual conference. Your presence is a testament to your commitment to strengthening ties between Latin America and Israel” he said.

Deputy Mayor of Jerusalem Fleur Hassan-Nahoum highlighted Guatemala and Honduras in particular for their vocal and bold support for Israel. “We know that it is not simple for countries like Guatemala and Honduras to make the decision to move their embassies to Jerusalem, and for that we are truly grateful” she said. Other speakers included President of the Interim Government of Venezuela Juan Guaidó, Speaker of the National Congress of Honduras Tomas Zambrano and IAF President Josh Reinstein.

The international legislatures shared their thoughts regarding the ties between their respective countries and Israel. Minister of Industry and Commerce Victor Bisonó from the Dominican Republic stated “When I was serving in Congress for more than eighteen years as a Deputy, I attended several summits of the IAF in Israel and Miami, and now as Minister of Industry and Commerce I want to reiterate my commitment to continue advancing in strengthening ties between Israel and the Dominican Republic”.

Honduras Congressman Tomás Zambrano,  Secretary General of the Congress of Honduras, similarly echoed, “As leader of the Israel Allies Caucus in Honduras, we want to send a message of support to the State of Israel from the Congress of Honduras. We want to continue supporting the rapprochement between Israel and the Latin American region. The relationship between Israel and Honduras is very strong today, as demonstrated by the President of Honduras’ statement of his intention to transfer the Honduras embassy to Jerusalem” he said.

The Israel Allies Foundation (IAF) coordinates a network of 50 Israel Allies Caucuses in parliaments around the world, 11 of which are in Latin America. Leopoldo Martinez serves as the

IAF Latin America Director, overseeing the cooperation between the caucuses and their general operations. “When you see 20 legislators from 7 different Latin American and Caribbean countries meeting together, and talking about the future of Israel and Latin America relations, it speaks to the power of faith-based diplomacy. Especially now, in the middle of a global pandemic, seeing this unconditional support for Israel from elected officials from Latin America is even more significant” he added.

Republish this article
About The Publishers
Israel Allies Foundation
Founded in 2007, The Israel Allies Foundation is dedicated to promoting communication between parliamentarians and legislators around the world who share a belief that the State of Israel has the right to exist in peace within secure borders. Today, the IAF coordinates the activities of 50 Israel Allies Caucuses around the world.
Publish your organization's press release on JNS Wire
Releases published on the JNS Wire are communicated and paid for by third parties. Jewish News Syndicate, and any of its distribution partners, take zero responsibility for the accuracy of any content published in any press release. All the statements, opinions, figures in text or multimedia including photos or videos included in each release are presented solely by the sponsoring organization, and in no way reflect the views or recommendation of Jewish News Syndicate or any of its partners. If you believe any of the content in a release published on JNS Wire is offensive or abusive, please report a release.