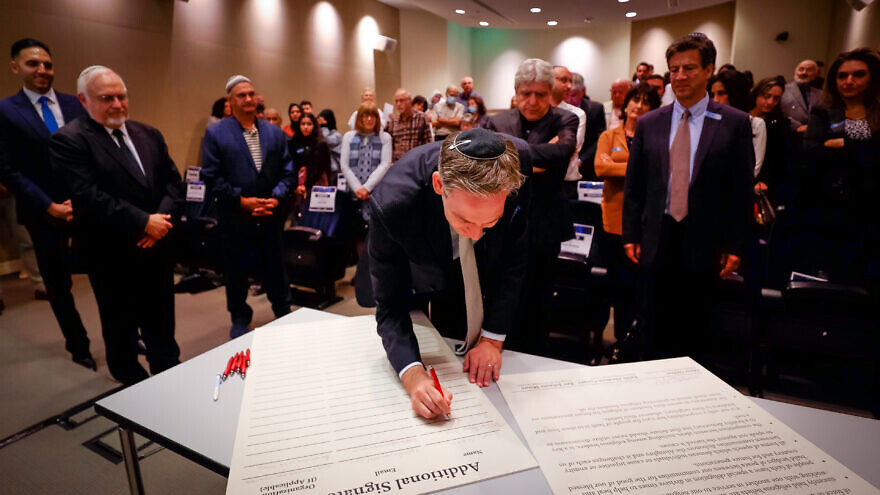 (September 29, 2022, Los Angeles, JNS Wire) The Muslim Coalition for America (MCA) and the Simon Wiesenthal Center (SWC) hosted a multifaith unity event last week at the Museum of Tolerance in Los Angeles, featuring renowned national multifaith leaders and the 15th Chairman of the Joint Chiefs of Staff, in commemoration of 9/11. Attendees included national and local faith leaders, community representatives, Afghan refugees who escaped Afghanistan during the U.S. withdrawal last year, and members of the public.

Omar Qudrat, the founder of MCA, a national platform for American Muslims dedicated to uniting Americans and fighting bigotry and intolerance in all of its forms, opened the event. “…We have enough problems here at home. We have enough division here at home. We have so much healing to do here at home. And so, I welcome you all to join us on this positive mission; we are going to transform the United States of America with positivity by bringing Christians, Jews and Muslims together.” MCA is a nonpartisan 501(c)(3).

General (Ret.) Richard Myers, a retired four-star general who served as the 15th Chairman of the Joint Chiefs of Staff from 2001-2005 leading America’s military response to the 9/11 attacks, provided the keynote address. Myers emphasized that during the aftermath of 9/11 “We were all on the same team,” and “unity at home was so important” to fighting the war on terror and operating in Iraq and Afghanistan. He added that the state of unity at home has an effect on how our military feels about their service when deployed and in harm’s way.

Myers also thanked about twenty Afghan evacuees who attended the event for putting their lives on the line to serve alongside and/or support the United States. Many of these refugees were evacuated from Afghanistan during the U.S. withdrawal in 2021.

Reverend Johnnie Moore, president of the Congress of Christian Leaders, told attendees: “We must listen to those whose beliefs differ from our own, and if this [U.S. Multifaith Unity] statement becomes part of our lives…then peace will be our starting point, not just an aspiration.” Rev. Moore was twice appointed as a Commissioner for the United States Commission on International Religious Freedom, serving across the Trump and Biden administrations.

During a panel discussion Rabbi Abraham Cooper, Associate Dean and Director of Global Social Action for the SWC, advised the audience, “King David said it really well…distance yourself from evil…And I think those of us who grew here with the Museum of Tolerance, our main goal here is to encourage personal responsibility [and] critical thinking…”

A moment of silence was held for the victims of 9/11, and prayers were offered by Mohamed Khan, a community peace activist, Reverend Moore, and Rabbi Li-Paz, Senior Rabbi of Valley Outreach Synagogue.

Toward the end of the event Qudrat, Rabbi Cooper, and Reverend Moore signed the historic document— The United States Multifaith Unity Statement—as a message to the entire country that American faith leaders will no longer allow religious differences to divide and restrict us. Other faith leaders in attendance and attendees of the event were invited to sign the statement as well. The statement will make its way across the United States for signatures from national leaders in faith, business, civil society, and national leaders in Washington, D.C.

About Muslim Coalition for America (MCA): MCA is a non-partisan 501(c)(3) dedicated to defending America’s national security, standing against bigotry and intolerance in all of its forms, building unity among Americans and promoting American values as enshrined in the Constitution. This event was a part of MCA’s national unity campaign currently underway. Learn more at www.muslimcoalitionforamerica.org.

Muslim Coalition for America
The Muslim Coalition for America (MCA) is a non-partisan 501(c)(3) dedicated to defending America’s national security, standing against bigotry and intolerance in all of its forms, building unity among Americans and promoting American values as enshrined in the Constitution. This event was a part of MCA’s national unity campaign currently underway. Learn more at www.muslimcoalitionforamerica.org.
Publish your organization's press release on JNS Wire
Releases published on the JNS Wire are communicated and paid for by third parties. Jewish News Syndicate, and any of its distribution partners, take zero responsibility for the accuracy of any content published in any press release. All the statements, opinions, figures in text or multimedia including photos or videos included in each release are presented solely by the sponsoring organization, and in no way reflect the views or recommendation of Jewish News Syndicate or any of its partners. If you believe any of the content in a release published on JNS Wire is offensive or abusive, please report a release.
Never miss a thing
Get the best stories faster with JNS breaking news updates