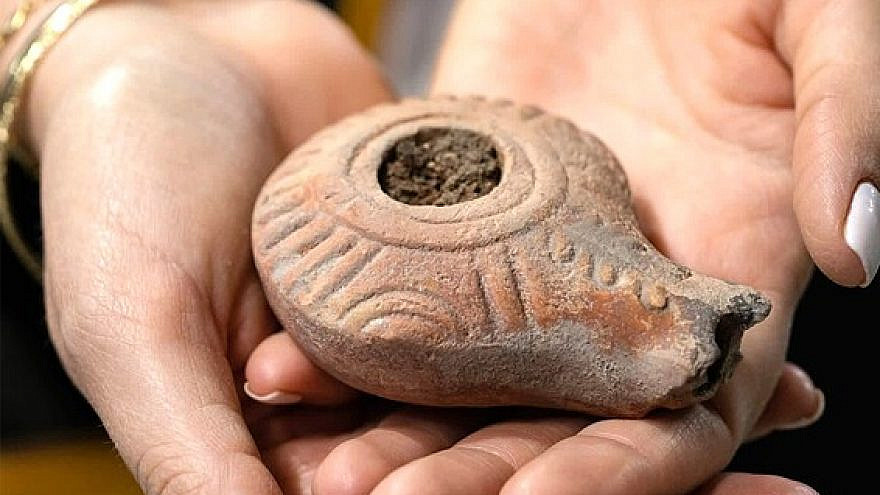 (December 13, 2020 / Israel Hayom) Israeli archaeologists have unearthed a candle-holder from the Hasmonean period in the City of David in Jerusalem.

The 2,000-year-old lantern, which has been preserved in its entirety, was discovered during excavations in the Old City of Jerusalem, led by the Israel Antiquities Authority and the Ir David (City of David) Foundation.

Archaeologists were excavating the road that was used for pilgrimages in the days of the Second Temple about 2,000 years ago. The road is nearly 600 meters (2,000 feet) long and 8 meters (26 feet) wide. It connects the Siloam Pool in the south of the City of David and the foot of the Temple Mount.

The candle-holder is made of clay and has plant decorations on its tip, probably a branch with leaves. It is typical of the first century BCE at the end of the Hasmonean rule during the Second Temple period.

“One of the archaeologists approached me with something hidden in his hands and asked me to guess what he had found. He opened his hands and showed me the candle that was preserved in its entirety. I was really excited,” said Riki Zlot Har-Tov, field manager of the Ir David Foundation.

Israel Antiquities Authority director of excavations Ari Levy said “these candles were used for different purposes—from simple everyday uses, such as lighting rooms and streets, to religious ceremonial uses for Shabbat and Hanukkah.”

“We will empty the contents of the candle and examine what kind of oil was used to light it,” added Levy. “We are used to finding only parts of candles. It’s not every day that we get to find a candle preserved in its entirety. We are all very excited.”