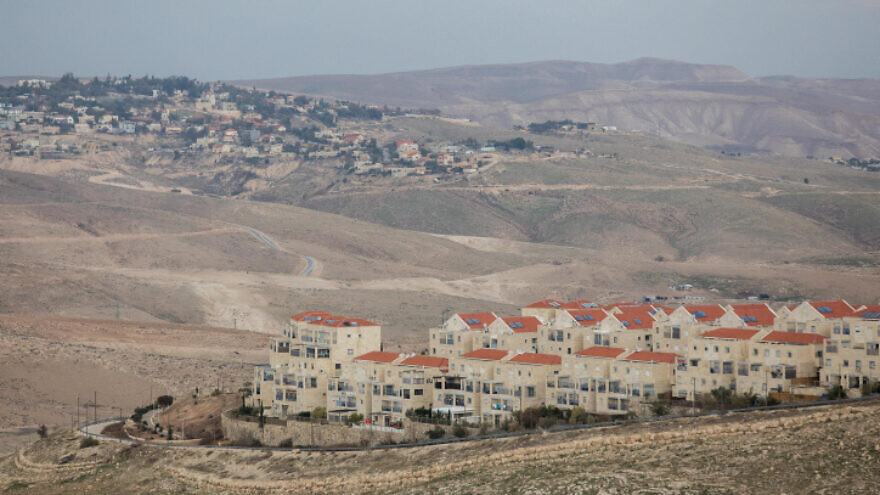 View of the Israeli settlement of Ma’ale Adumin, in the West Bank on Jan. 2, 2017. Photo by Yonatan Sindel/Flash90.
Spread the word.
Help JNS grow!
Share now:

(November 22, 2021 / JNS) A group of 26 Democrats is calling on U.S. Secretary of State Antony Blinken to act to prevent the advancement of plans for Israeli construction in the E-1 corridor between Jerusalem and Ma’ale Adumim.

“The recent efforts by the Israeli government to advance the approval to build 3,400 housing units in the highly sensitive area known as E-1 pose an irreconcilable challenge to a lasting peace solution between Israel and the Palestinians,” said the letter.

“To ensure the prospects of peace, we urge the State Department to exert diplomatic pressure to prevent settlement construction in E-1,” it added.

The E-1 region has long been considered for construction, especially as the population of Jerusalem continues to grow, and housing becomes increasingly scarce and expensive in the city. However, construction in the area has been controversial with critics saying the plan to create a physical link between Ma’ale Adumim and Jerusalem would bisect the West Bank and jeopardize a future Palestinian state.

Plans for units to be built in the area are currently under consideration with the Higher Planning Council for Judea and Samaria, which is currently hearing objections to the project with another hearing date set for Dec. 13, the Jerusalem Post reported.

During the Trump administration, America changed its policy regarding settlements, no longer viewing them as inherently in violation of international law. However, the Biden administration has taken a harsher stance and has condemned Israeli construction plans as “damaging” the prospects for a two-state solution.