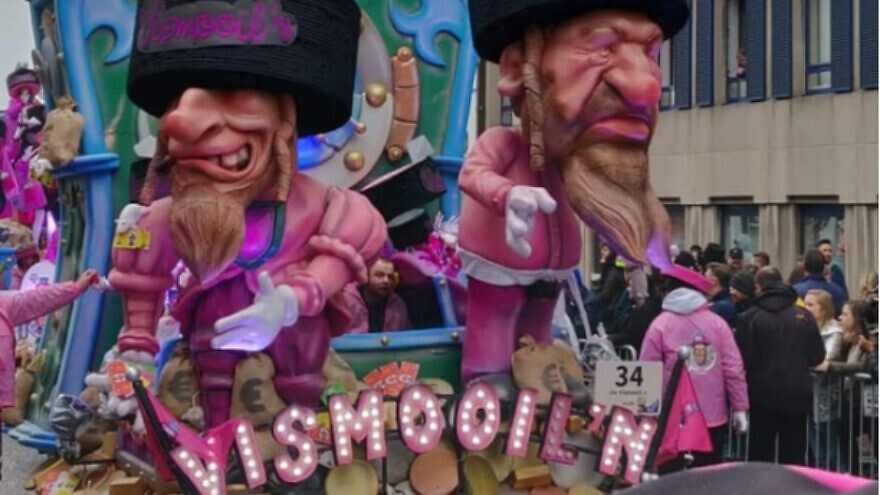 A view of a parade float at the Carnival of Aalst in March 2019, featuring two Orthodox Jewish caricatures that were widely condemned as anti-Semitic. Source: Screenshot.
Spread the word.
Help JNS grow!
Share now:

(February 22, 2021 / Jewish Journal) The Anti-Defamation League has released a new report highlighting the politicization of anti-Semitism in Europe and its harmful impact on Jews.

The report, published on Feb. 18, begins with highlighting the prominence of anti-Semitism in Russian “disinformation campaigns” about the political situation in Ukraine. For instance, when Ukrainian President Viktor Yanukovych was ousted in 2014, Russian President Vladimir Putin alleged that Ukraine had been taken over by anti-Semites and neo-Nazis.

“While an anti-Semitic party, Svoboda, had a small role in the initial post-Yanukovych government, its official role and political support were short-lived,” the report stated. “Jews were not repressed and very few genuine anti-Semitic incidents occurred. In fact, some of the most powerful figures in Ukrainian politics since 2014 have been Jews.”

Additionally, Russian television programs have claimed that some Ukrainian politicians are “secret Jews.”

The report also noted that during the July 2020 presidential elections in Poland, the opposition candidate, Warsaw Mayor Rafal Trzaskowski, was accused of wanting to sell out Poland to “Jewish interests” because he said he was willing to discuss the issue of restituting the Jewish property that Poland’s Communist government kept after the Holocaust. The ADL’s 2019 Global 100 Survey found that 75 percent of Poles believe that Jews talk about the Holocaust too much and 40 percent think Jews have outsized power over “global affairs.”

The report then stated that in 2017, a law was implemented in the United States mandating that federal government issue reports encouraging European governments to follow through on their pledges of Jewish property restitution. Polish nationalists claimed that it was a Jewish effort to extort money from Poland and that the country was under attack by the “Holocaust Industry.”

The report argues that in Hungary, rhetoric against billionaire philanthropist George Soros, who is of Jewish descent, is littered with “associations of Jewish nefariousness, of Jews with money and commerce, and allegations that Jews place their transnational ethnic affiliations ahead of the interests of their non-Jewish neighbors.” As evidence, the report pointed to how anti-Soros posters in the country have been vandalized with anti-Semitic graffiti.

The report then turned to Britain, arguing that the country’s Labour Party under the leadership of Jeremy Corbyn showed how rhetoric against Israel, Zionism and capitalism can descend into anti-Semitism. The report highlighted how there were “incidents of Jewish [Labour] members being harassed at party meetings where they were called ‘Zio scum,’ told ‘Hitler was right’ and informed that there was an ‘over-representation of Jews in the capitalist ruling class that gives the Israel-Zionist lobby its power.’ ”

The report concludes that the Labour Party failed to eradicate its issues with anti-Semitism under Corbyn’s leadership, and a rise in online anti-Semitism in the country has been attributed to Corbyn supporters.

Other examples highlighted in the report include Ukrainian nationalists glorifying figures who fought against the Soviets alongside the Nazis and murdered Jews independently, as well as German nationalists who currently rail against “Holocaust fatigue.”

The report concluded: “It may be too much to wish that antisemitism never appear in politics, but it must not be too much to ask that any appearance be denounced.”