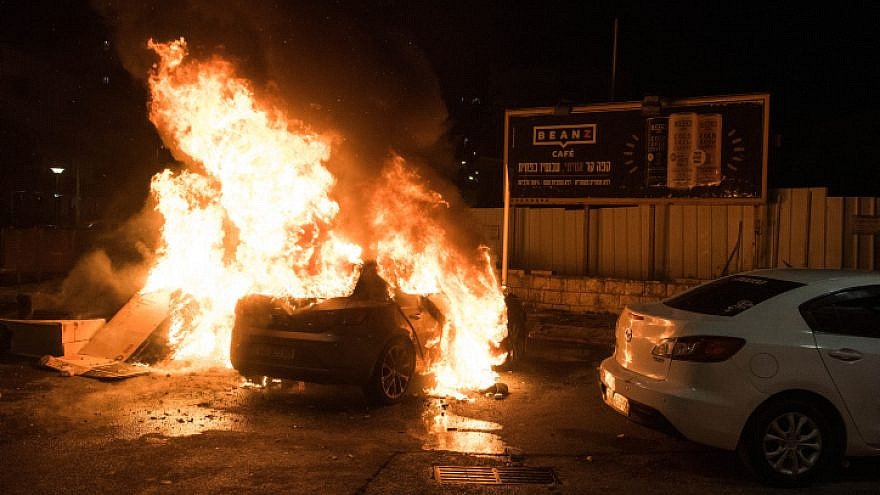 A car is set on fire during clashes between Arab and Jews in Acre, northern Israel, May 12, 2021. Credit: Roni Ofer/Flash90
Spread the word.
Help JNS grow!
Share now:

Piran is accused of participating in multiple riots in Acre during “Operation Guardian of the Walls” in May 2021 and in the near-lynching of Mor Ganashvili.

In explaining her actions on Monday, Silman said, “It is impossible not to give significant weight to the fact that these incidents occurred over a year ago. This should demonstrate that, even if the defendant posed a threat, it has decreased with the release of tensions [between Arab and Jewish Israelis].”

He stands accused of engaging in unlawful activities over several days.

Attorney Haim Bleicher of the Hoenu legal organization, which represents Ganashvili, said: “The release to house arrest of a terrorist who carried out for several days attacks of arson of Jewish shops, riots and a severe lynching, this only happens in a country where life does not matter,” Arutz Sheva reported.

Bleicher added, “We expect that an appeal will be filed against the district’s decision and that the Supreme Court will rule according to the basic life interest of the State of Israel and its citizens and leave the terrorist and his friends behind bars.”

Ganashvili responded to the ruling: “I am upset, angry, I am outraged that the blood of a Jewish person was made to be worthless.”