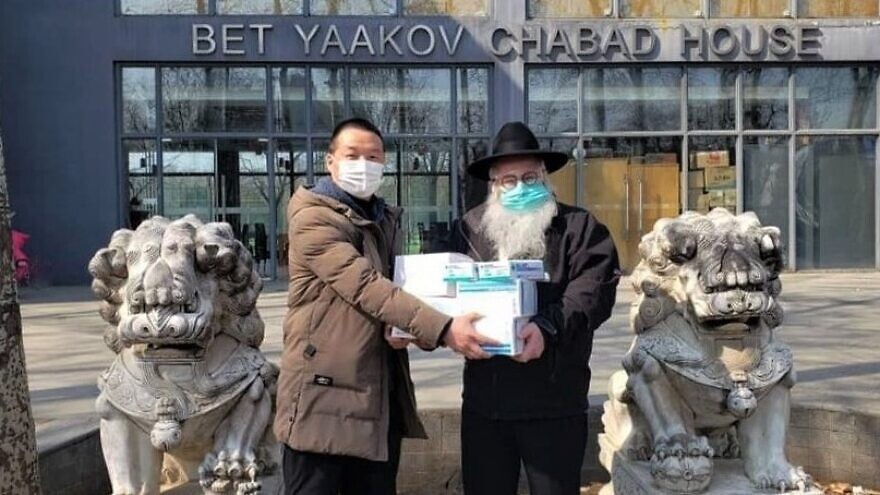 Rabbi Shimon Freundlich has stayed behind in Beijing, China, though his family evacuated to safety overseas. While much of the expatriate Jewish community has left China, Chabad-Lubavitch emissaries are still hard at work, helping local residents. Credit: Chabad.org/News.
Republish this article
513 WORDS
Spread the word.
Help JNS grow!
Share now:

(March 6, 2020 / Chabad.org/News) As the coronavirus, or COVID-19, continues its worrisome spread around the globe with more than 80 affected countries and territories, China, where the virus originated in late December, has been deeply impacted with more than 80,000 infected and almost 3,000 deaths.

Chabad-Lubavitch of China, which operates 13 centers staffed by 16 emissary families, is now in uncharted territory. As the health crisis has worsened, most of the emissary families have also left China, remaining in close contact with their communities now dispersed around the globe.

Rabbi Shimon Freundlich, co-director of Chabad-Lubavitch of Beijing with his wife, Dini, has stayed behind, his family evacuated overseas. Along with Chabad Rabbi Shalom Greenberg, co-director of the Shanghai Jewish Center, who recently returned to celebrate the holiday of Purim, they are now the only rabbis in mainland China, there to support those who were unable to leave and the local Chinese population, while heeding official recommendations and in close coordination with international health professionals and rabbinic authorities.

“I could not fathom that in a country the size of China, there won’t be someone making Kiddush, someone wishing ‘Shabbat Shalom,’ ” says Freundlich. “During World War II, the Chinese people welcomed Jewish refugees; now it’s our turn to repay them,” he says, noting that Chabad of China is lending assistance to those in need.

Funded by the people they serve, many of them are hard-hit by the economic impact of the virus. Factories are closed, workers are home, and supplies are dwindling. China’s Chabad centers must bear the costs of rent and upkeep, and must continue paying their local staff.

Travel and accommodation expenses for the emissaries are rising since it’s uncertain when they will be able to return to China, with some projecting several months until life is back to normal. At the same time, the emissaries are working to make sure their community members have everything they need, materially and spiritually, wherever they may be.

With no other recourse, Chabad of China is turning to the global Jewish community for assistance and support. “All Jews are responsible for one another,” says Rabbi Yekutiel Kalmenson, co-director of Chabad of Ningbo (an industrial hub located in Eastern China’s Zhejiang province) with his wife, Rochel. “Our communities are your communities.”

The rabbis note that China has no Jewish infrastructure other than Chabad, and as an international community, Chabad serves Jews from all over the world.

“You are not supporting an organization,” stresses Freundlich, “you are supporting Judaism. In China, Chabad isn’t a part of the greater Jewish community fabric, but is the community itself.”

A fundraiser has been set up to support Chabad of China through this difficult period, with a goal of raising $1 million to continue to sustain Jewish life, services and amenities for the local population, students, visitors and guests.

This story originally appeared on Chabad.org/News.