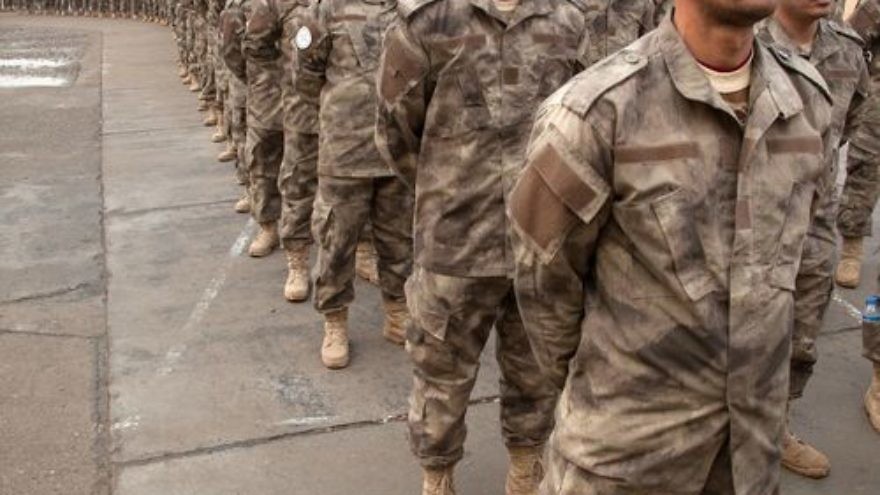 (February 26, 2015 / JNS) The number of Assyrian Christians captured by the Islamic State terror group in northeastern Syria continues to rise, marking the latest brutal campaign waged by Islamic State against Christians and other minority groups in Syria and Iraq.

“We are absolutely appalled, but not surprised, by the actions of the Islamic State,” Jeff Gardner, a spokesman for Restore Nineveh Now Initiative, a group promoting protection and relief for Assyrian Christians, told JNS.org. “They (Islamic State) continue to do what they do—terrorize, murder, and pillage.”

According to reports, local Arab tribal leaders in Syria are acting as intermediaries between Islamic State and Assyrians, trying to bring about the release of prisoners in exchange for Islamic State fighters held by Christian and Kurdish fighters.

“Immediately for Syria, we’re calling for much broader international intervention,” said Gardner. “We are calling on the public to support our relief efforts. Both governments and people need to respond to this crisis.”

Gardner noted that his organization recently launched a campaign called #SaveKhaborNow, which has already raised significant funds to aid Assyrian Christians in Syria.

“We have already sent tens of thousands of dollars in aid and assistance to groups working on the ground,” he said. “We will continue to send money, coordinating action and calling on the international community to intervene.”

Restore Nineveh Now is an initiative of the American Mesopotamian Organization, a grassroots political action committee that was founded to influence and guide U.S. policy on matters related to the interests of the Assyrian-American community. Restore Nineveh Now has garnered headlines recently for its work in helping organize and train the Nineveh Plains Protection Units, a military organization created last year in Iraq to defend and retake Assyrian Christian land conquered by Islamic State. Nineveh refers to the ancient Mesopotamian city on the Tigris River that served as the capital of the Assyrian Empire in antiquity.

In January, the Iraqi Council of Ministers, which comprises the executive branch of the Iraqi government, approved a plan to establish a Nineveh Plains province in Iraq as a homeland for the Assyrian people.

“We have tens of thousands of Assyrian volunteers,” Gardner said. “We just finished training and mobilizing the first 500. These men are ready, able, and willing to put everything on the line.”

The Assyrian Chaldean Syriac Youth Alliance (ACSYA), a grassroots organization whose goal is to promote discussion on domestic and international issues relating to the Assyrian Chaldean Syriac community, said in a statement that the establishment of a safe haven in the Nineveh Plains “is crucial to the survival of ethnic Assyrians and other minorities such as Chaldeans and Yazidis.”

“The barbarism of the Islamic State does not intimate nor deter us,” ACSYA said. “We the people will continue our efforts in raising awareness.”

Meanwhile, Islamic State still occupies much of the territory that belongs to the Assyrian people in northern Iraq, despite efforts by the U.S.-led coalition as well as Iraqi and Kurdish forces to oust the jihadist group.

On Thursday, Islamic State released a video that appears to show fighters from the jihadist group inside the Mosul Museum with sledgehammers, destroying statues and other artifacts that were related to the Assyrian Empire and other ancient civilizations in Iraq. This includes a statue of the protective winged-bull Assyrian deity, a symbol that has been used on Iraqi currency for decades.

“The so-called Assyrians and Akkadians and others looked to gods for war, agriculture, and rain to whom they offered sacrifices,” an Islamic State fighter said in the video.

“The Prophet Mohammed took down idols with his bare hands when he went into Mecca,” added the fighter. “We were ordered by our prophet to take down idols and destroy them, and the companions of the prophet did this after this time, when they conquered countries.”

The White House on Feb. 25 said in a statement the U.S. “strongly condemns” Islamic State’s recent attacks on Assyrian Christians, “including the burning of homes and churches, the displacement of thousands, and the abduction of a large number of Syrian Christian civilians, among them women, children, and the elderly.” The U.N. Security Council also condemned Islamic State’s actions, but Gardner told JNS.org that words are not enough. He said the international community needs “to intervene on behalf of the religious minorities of this area to put a stop to this.”

Gardner said that an international force is needed in the region to protect the minorities living there and to support local fighters such as the Nineveh Plains Protection Units.

“We need to move past just airstrikes and either mobilize international forces or continue to train indigenous forces like the Assyrians,” he said.