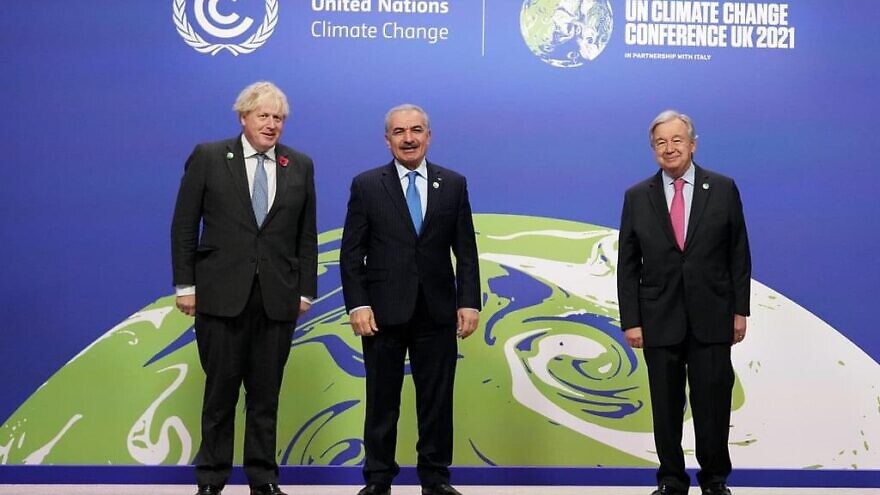 “In #COP26, we affirmed our commitment to contribute to int’l collective action to combat climate change. Despite Israel’s systematic destruction of Palestinian environment, Palestine pursues measures to support climate change adaptation in line with its National Development Plan,” Shtayyeh wrote on Twitter ahead of his address.

He was one of more than two dozen world leaders who addressed the summit on Monday, including Israeli Prime Minister Naftali Bennett.

While Bennett’s message largely focused on Israeli entrepreneurship in helping to solve climate issues, Shyayyeh took Israel to task in his brief address, blaming it as the primary cause of pollution in Palestinian-controlled areas.

“The way in which waste is treated by Israel, particularly toxic waste, as well as solid waste, are the principal causes of pollution in Palestine,” he said.

He went on to claim that Israel has “stolen” Palestinian resources and accused the Jewish state of cutting down some 2.5 million trees since 1970, including 800,000 olive trees. He also blamed Israel for contaminated groundwater in the Gaza Strip and the country’s role in drying up the Dead Sea.

Noting that the P.A. was one of the signatories of the 2016 Paris agreement, he went on to say that public institutions in Palestinian areas have adopted solar energy, including 500 schools.

“We have a raft of public plans and projects that ties sustainable development to green and clean energy,” he said.

However, Shyayyeh said “the Israeli occupation is the major stumbling block to sustainable development in Palestine. Said occupation must come to an immediate end so that our people can live in freedom and in dignity and can do so in an independent territory with its capital Jerusalem.”

“I hope we will continue to work to cooperate and collaborate and work together to ensure clean air and a clean and greener environment for one and all,” he declared.