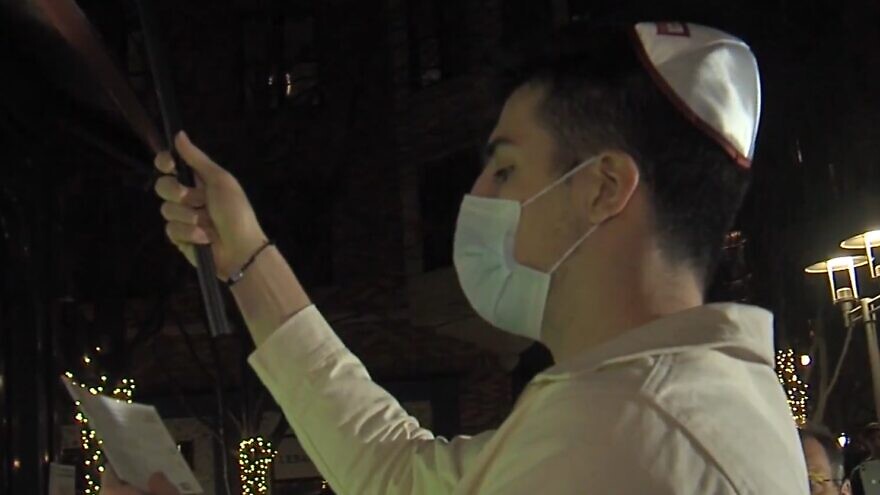 (December 3, 2021 / JNS) Washington Wizards forward Deni Avdija is proudly representing Israel and Judaism on and off the court.

The 20-year-old Israeli is having a good second season in the NBA and finally having opportunities to interact with the local Jewish community. Avdija lit the menorah on the fifth night of Chanukah at the Rockville Town Center in Montgomery County, Md., 20 miles north of the team’s Capital One Arena.

He wore a white kipah, chanted the blessings, signed autographs, answered questions from fans and expressed appreciation to the members of the Jewish community who helped him celebrate his first Hanukkah away from family.

“I want to say thank you to the people who came here and supported me and light the menorah with me. Those little things with the community, especially with the Jewish community, it’s not easy to celebrate the first Hanukkah out of home,” he said.

Avdija elaborated on Thursday night’s “in-person-with-fans” event during Friday’s post-practice media session. “It was pure enjoyment to meet and share this special moment,” he said. “The love and support the Jewish community game me is unreal!”

Avdija, who is currently the only Israeli playing in the NBA, has always looked to the example set by Omri Casspi and Nadav Henefield—Israelis who also had distinguished basketball careers in the United States. “I saw what they did and knew I wanted to do that, too. I aimed for that from a young age.”

In fact, he takes his role quite seriously. “It is great representing Israel; I am trying to do my best on and off the court to give pride to my country.”

And he noted that he has always loved the “Festival of Lights.”

“My mother had a special connection to this holiday,” he related. “This is the holiday we focused most on. It is just good vibes—this holiday in Israel when I was growing up. You had sufganiyot everywhere, the songs, the menorahs … everywhere. It is just one of my favorite holidays for sure. And I wait every year to celebrate it again and again.”

On a health digression, Avdija reported that he was “not feeling well” and was “a little tired.” He is listed as “questionable-non-COVID illness” for the Friday home game against the Cleveland Cavaliers. The Wizards, 14-8, are coming off an eight-point win against the Minnesota Timberwolves, marking their eighth home win of the season.

On Sunday, the Wizards begin a three-game road trip versus Toronto, Indiana and Detroit, and will play the next nine of 10 games on the road.

Avdija is averaging 6.1 points, 5.1 rebounds and 20 minutes of playing time per game. He is second on the team in blocked shots.

“I feel stronger, more experienced,” he said, “am getting fewer foul calls and am learning something new and getting better every day.”

Deni Avdija is here to wish you a Happy Hanukkah! ???? pic.twitter.com/bxKmjpFyvx