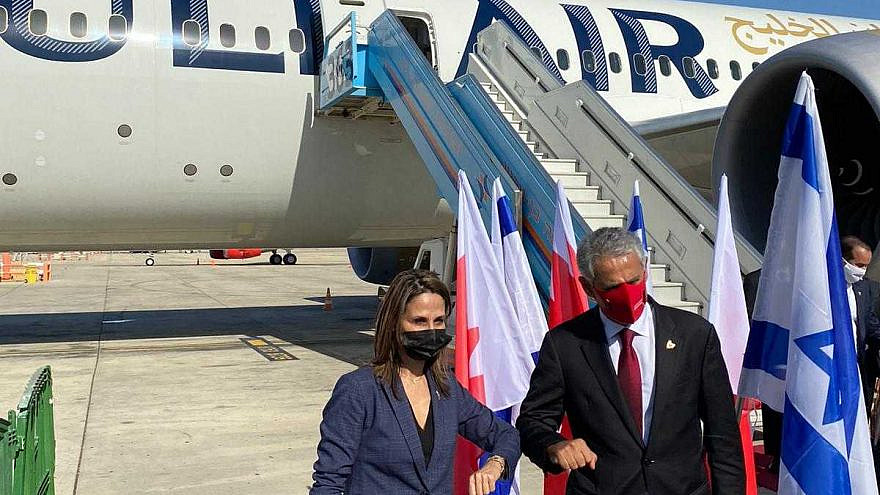 “I am honored to welcome H.E. Minister Al Zayani, who arrived with the head of the Tourism Authority and members of the business sector to promote mutual tourism between the countries,” said Farkash-Hacohen following the reception.

“The opening of direct flights, and the travel of people between the countries, is an essential step towards building peace between our nations. I look forward to hosting the minister and his delegation, showing them a taste of Israel’s scenes and heritage, and introducing them to Israel’s private tourism sector,” she said.

In addition to the minister, the delegation includes the director of the Bahrain Tourism and Exhibitions Authority, the CEO and CCO of Gulf Air and the chairman of the Association of Bahrain Travel and Tour Agents.

During the visit, which is scheduled to last until Thursday, the visitors will participate in a number of working meetings with key figures in the Israeli tourism industry, including Amir Hayak, president of the Israel Hotel Association, Tali Laufer, CEO of The Israel Association of Travel Agencies and Consultants and Yossi Fatael, CEO of the Incoming Tour Operators Association. The Bahraini delegation will also visit Jerusalem and Tel Aviv.

Talks will revolve around mutual promotion packages and tourism initiatives, as well as turning Israel to a destination for Gulf Air flights from other countries. On Wednesday ministers Farkash-Hacohen and Al Zayani are to sign a Memorandum of Understanding in the field of tourism, which includes the establishment of a bilateral forum to promote mutual tourism, with representatives from both governments and the public sector of each country.

“For the past two months we have worked hard to turn peace from an idea to a reality, and the tourism MoU between the countries is an important step in that direction,” said Farkash-Hacohen. “The tens of thousands of tourists who will arrive from Bahrain and the United Arab Emirates when the skies reopen will experience Israel in the best way possible. Such visits contribute not only to building peace between the countries and people, but also towards strengthening Israel as a tourist destination for millions of people from around the world.”