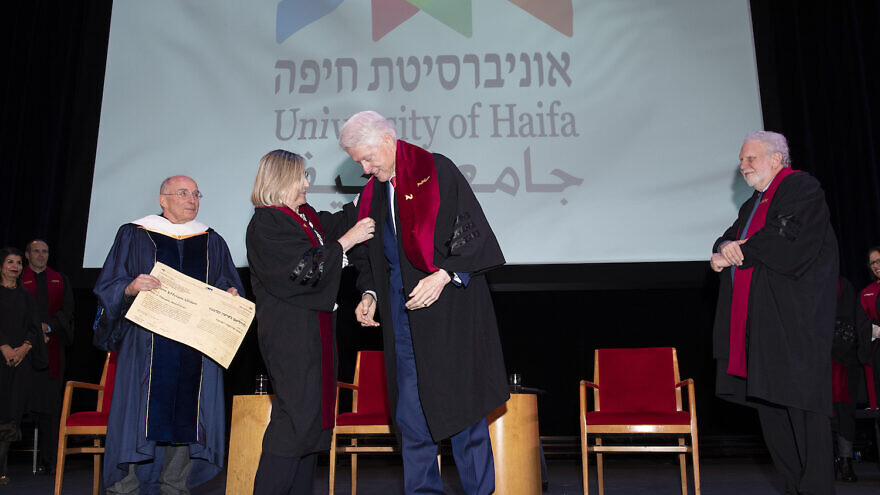 (December 13, 2022 / JNS) With pomp and circumstance and some of his trademark disarming humor, former U.S. President Bill Clinton was awarded an honorary doctorate by the University of Haifa in New York City on Monday night.

The degree was bestowed upon Clinton for his longtime commitment to the State of Israel, for promoting coexistence in the Middle East and for the Clinton Global Initiative’s involvement in social and economic sustainability. Clinton’s friend New York University President Emeritus John Sexton also received an honorary doctorate, with the event taking place on NYU’s campus in Greenwich Village.

“The university took it upon itself to solve global problems. And these two people, President Clinton and President Sexton, were two figures that really solve global problems in their own missions,” Prof. Oren Gazal-Ayal, head of the Center for the Study of Crime, Law and Society at the University of Haifa, told JNS. “We really thought this is the place and this is the time to honor them with an honorary doctorate.”

Ushered into the hall by bagpipe players performing “Hava Nagila,” Clinton was set to take part in an on-stage discussion on global sustainability, the Russia-Ukraine war and the role of Western democracies. The chat ended up scratched due to time constraints and most of Clinton’s speech was about his long-standing friendship with Sexton. 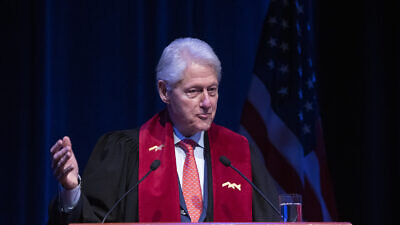 President Bill Clinton addresses an audience at NYU after receiving an honorary doctorate from the University of Haifa, Dec. 12, 2022. Credit: Elena Olivo.

Clinton said very little about his experience dealing with Middle East politics and peace as president from 1993 to 2001, though as he was being shuffled around the arrangement of chairs on stage, he quipped that it’s “the furthest to the right” he remembers being. Clinton pointed out that his daughter Chelsea has been heavily involved in the building of NYU’s Abu Dhabi campus.

He did note that the robe he was adorned with for the occasion was designed by an Israeli he met at Yitzhak Rabin’s funeral back in 1995.

“I believe her name is Batia Shani and I love this robe. All the more because she said that she met me at the cemetery on the occasion of Yitzhak Rabin’s funeral and she finished this robe on his memorial day. So, I will treasure this for the rest of my life,” said Clinton. “I loved him very much, and I miss him still.”

Clinton was presented with his robe by Israeli philanthropist Tova Sagol and was introduced by the American Jewish philanthropist and real estate developer Eddie Trump (no relation to Donald Trump).

The honorary doctorates “align strongly with multiple cornerstones of [the] University of Haifa’s mission,” according to a press release. “In the realm of shared society, [the] University of Haifa has long been a place where Jews, Muslims, Christians, Druze, international students and security personnel study and socialize together in an atmosphere of tolerance and respect on campus.”

The statement also noted that the Israeli school is also committed to promoting the United Nations Sustainable Development Goals, which “includes a trilateral agreement with the UAE and Germany on joint research on climate change and pollution in the Gulf.”

“We have taken that adage of ‘Think globally and act locally’ and we have turned it on its head,” said University of Haifa President Prof. Ron Robin, noting the university’s partnerships with institutions of higher education around the world. Sexton praised the school for how it “embraces building bridges across difference.”

Gazal-Ayal said, “The real background for this event was the University of Haifa aiming to solve SDG (sustainable development goals) problems, the problems of climate change, the problems of social injustice. And these are the people that dealt with this problem.

“These are global problems. These are not local programs, and that was emphasized in the ceremony,” he said.