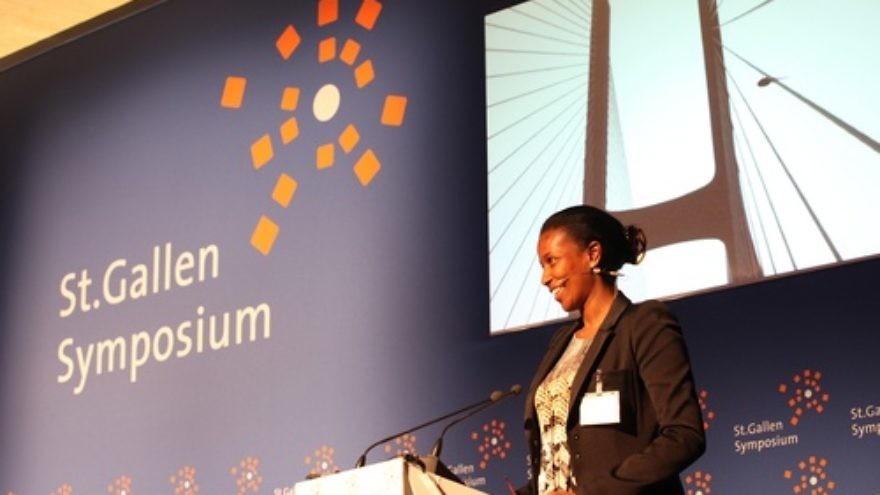 (April 9, 2014 / JNS) After facing growing pressure from faculty members, students, and an outside Muslim advocacy group, Brandeis University saidTuesday that it is rescinding its decision to award an honorary degree to Ayaan Hirsi Ali, a women’s rights activist and critic of Islam, over her “past statements that are inconsistent with Brandeis University’s core values.”

But in light of the school’s past decisions to honor American playwright and screenwriter Tony Kushner and South African Bishop Desmond Tutu, who have both made anti-Israel or anti-Semitic remarks, some are now accusing Brandeis of applying a double standard over the move to rescind Hirsi Ali’s honor for her remarks on Islam.

In a 2004 interview with Haaretz, Kushner called the creation of Israel a “mistake.” Yet in 2006, former Brandeis president Jehuda Reinharz defended Kushner’s honorary degree, saying, “Just as Brandeis does not inquire into the political opinions and beliefs of faculty or staff before appointing them, or students before offering admission, so too the university does not select honorary degree recipients on the basis of their political beliefs or opinions.” At the time, a prominent campaign led by the Zionist Organization of America and other Jewish groups called on Brandeis to pull Kushner’s honor, to no avail.

“That Brandeis withstood Zionist unhappiness in 2006, and went ahead to award an honorary degree to Tony Kushner, points to who today really has power in the United States—and even in the Jewish community,” Middle East Forum President Dr. Daniel Pipes, whose daughter attended Brandeis, told JNS.org on Wednesday.

Born in Somalia to a strict Muslim family and raised in Kenya, Hirsi Ali survived civil war, female genital mutilation, abuse, and an arranged marriage. She fled to the Netherlands in the early 1990s.

After renouncing her Muslim faith, Hirsi Ali became an outspoken proponent of women’s rights, especially in the Muslim world, and a staunch critic of Islam, which she views as being at war with the West. She also served as a member of the Dutch parliament from 2003 to 2006, founded the AHA Foundation to protect women’s rights, and is now a fellow at the American Enterprise Institute, a conservative think tank.

Daniel Mael, a junior at Brandeis University and co-founder of Brandeis Students for Accuracy about Israeli and Palestinian Affairs, said he is “appalled by the hypocrisy of the university administration and their inability to distinguish between [Hirsi Ali’s] view on Islam and her efforts in this world.”

“This highlights [Brandeis’s] shallow commitment to [its slogan] ‘Truth, even unto its innermost parts,’ which has been replaced with the empty buzzword ‘social justice,’” Mael told JNS.org.

In a statement released Wednesday afternoon, Hirsi Ali said, “The ‘spirit of free expression’ referred to in the Brandeis statement has been stifled here, as my critics have achieved their objective of preventing me from addressing the graduating Class of 2014. Neither Brandeis nor my critics knew or even inquired as to what I might say. They simply wanted me to be silenced.”

Hirsi Ali has been accused of Islamophobia for calling Islam a “backwards religion” and a “destructive nihilistic cult of death” that legitimizes murder. Pressure against her honorary degree had mounted from Brandeis faculty members and students, as well as from the Council on American-Islamic Relations (CAIR). More than 85 out of 350 professors at Brandeis wrote to university President Frederick Lawrence, and students launched a petition that garnered nearly 7,000 signatures, urging the university to rescind Hirsi Ali’s award.

“Hirsi Ali’s body of work is well known, so for the Brandeis administration, after it had decided to grant her an honorary degree, to say that it only latterly discovered her views is disingenuous. Clearly, Brandeis capitulated to Islamist pressure, spearheaded by the Council on American-Islamic Relations, an organization founded by Islamic terrorists,” Pipes said.

In a letter to Lawrence, the CAIR National Executive Director Nihad Awad said that honoring Ali is “equivalent to promoting the work of white supremacists and anti-Semites,” and called on the university to rescind the honorary degree.

But CAIR, which claims to be America’s largest Muslim civil liberties and advocacy organization, has come under fire in the past for its ties to the Palestinian terrorist organization Hamas through the Holy Land Foundation, as well as for being a platform for “conspiratorial Israel-bashers and outright anti-Semites,” according to the Anti-Defamation League.

Hirsi Ali said her critics “have long specialized in selective quotation—lines from interviews taken out of context—designed to misrepresent me and my work.”

“For over a decade, I have spoken out against such practices as female genital mutilation, so-called ‘honor killings,’ and applications of Sharia Law that justify such forms of domestic abuse as wife beating or child beating,” she said. “Part of my work has been to question the role of Islam in legitimizing such abhorrent practices. So I was not surprised when my usual critics, notably the Council of American-Islamic Relations (CAIR), protested against my being honored in this way.”

Asked about the decision to rescind Hirsi Ali’s honor, Brandeis told JNS.org that it did not wish to comment beyond the online statementit issued to announce the decision. In that statement, the university claimed its decision was reached after a discussion between Hirsi Ali and Lawrence.

But Hirsi Ali said, “I wish to dissociate myself from the university’s statement, which implies that I was in any way consulted about this decision. On the contrary, I was completely shocked when President Frederick Lawrence called me—just a few hours before issuing a public statement—to say that such a decision had been made.” An online petition launched on TruthRevolt.org, meanwhile, urges Brandeis “to reverse its terrible decision to humiliate this brave woman instead of honoring her as they should.”

The Committee for Accuracy in Middle East Reporting in America (CAMERA) had just hosted Hirsi Ali as a keynote speaker at its April 6 gala dinner. CAMERA Executive Director Andrea Levin told JNS.org that her organization is “deeply dismayed at Brandeis capitulating to pressure and rescinding an honorary degree” for Hirsi Ali.

“We were proud to have her keynote our annual gala dinner—just as she’s spoken at many events and received awards such as one for Moral Courage from the American Jewish Committee [in May 2006],” Levin said. “She deserves support for her admirable work on behalf of women’s rights and the rights of all people to live free from coercion and oppression.”

American Jewish Committee Executive Director David Harris told JNS.org, “Much as we have long been admirers of Brandeis, this is not the university’s finest moment.”

“Since when does a university supposedly devoted to a free exchange of ideas succumb to suppression of speech?” Levin asked.