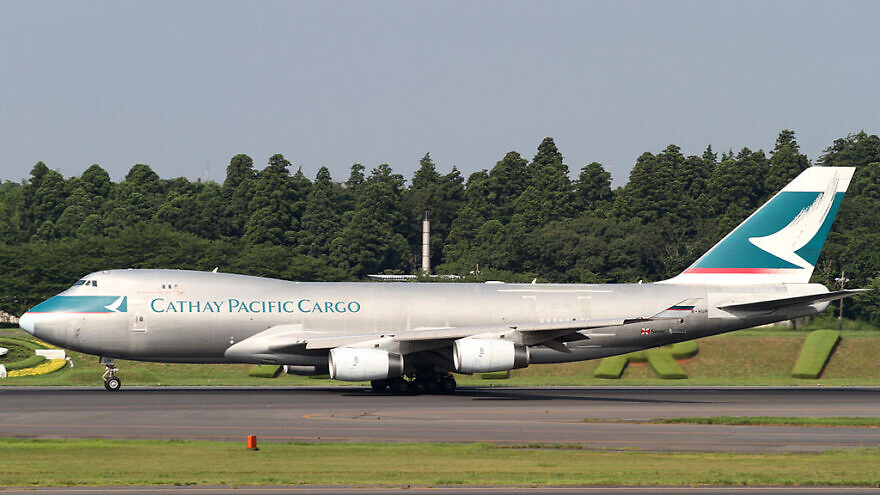 Riyadh announced last month that it would open its airspace to “all carriers,” paving the way for airlines, including Israeli ones, to overfly the kingdom and thereby drastically reduce flight times to and from the Jewish state to major destinations in Asia.

At the time, Saudi Arabia’s General Authority of Civil Aviation released a statement saying: “Within the framework of the Kingdom of Saudi Arabia’s keenness to fulfill its obligations under the Chicago Convention of 1944, which stipulates non-discrimination between civil aircraft used in international air navigation, and to complement the efforts aimed at consolidating the Kingdom’s position as a global hub connecting three continents and to enhance international air connectivity, the General Authority of Civil Aviation (GACA) announces the decision to open the Kingdom’s airspace for all air carriers that meet the requirements of the Authority for overflying.”

A flight-tracking service showed that the Cathay Pacific plane on Thursday flew over the United Arab Emirates and the Persian Gulf before crossing the Saudi coast near the city of Dammam, according to reports. The aircraft then passed over northern Saudi Arabia and Jordan, entering Israeli territory over the Dead Sea.

Another Cathay Pacific flight from Hong Kong to Tel Aviv earlier this week took a different route, reports said, instead flying northwest over China, Kazakhstan and Turkey, and entering Israeli airspace from the Mediterranean Sea.

Saudi Arabia had previously granted special approval for some flights from India and the United Arab Emirates to cross into its airspace en route to the Jewish state, according to media reports.

Saudi officials are also expected to approve direct flights from Israel to Mecca, which will allow Israeli Muslims to more easily make the annual Hajj pilgrimage. Until now, Muslim worshippers had to embark on a lengthy bus ride from Israel to Jordan before boarding a flight to Mecca.