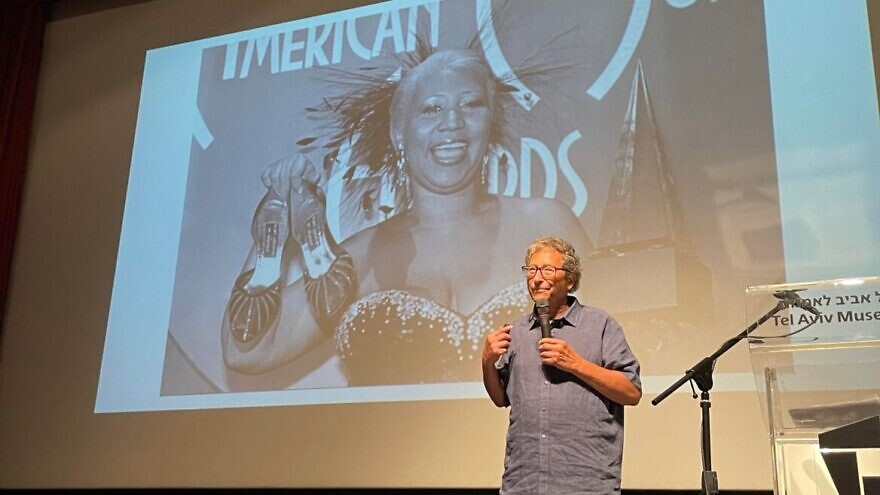 “I come for the country, the people, who I love. The whole country means something to me.”

Nevertheless, at his talk at the Tel Aviv Museum of Art in collaboration with the Department of Jewelry and Fashion at Bezalel Academy of Arts and Design last week, there were—for Israel at least—some pretty fancy shoes being worn around the auditorium. Glittering open-toed silver sandals, neon pink trainers and some interesting strappy espadrilles.

Given Weitzman’s status, it wasn’t a surprise that his audience of designers and fashion students would make an effort with their footwear, although as Weitzman correctly surmised in his talk, most of them were flats.

Israelis might want to look good, but they also do love their comfort.

The highest heels at Weitzman’s talk were the ones he brought himself: Two of his most famous shoes—the Nudist and the Million-Dollar Sandal—which were modeled by two women from the audience.

Weitzman, who lives in the United States, was in Israel for the Maccabiah Games, for which he launched a $5 million matching scholarship fund with Maccabi USA.

Not only was he the U.S. flag bearer at the opening ceremony on July 14, but he’s also competing.

This is his fourth Maccabiah Games playing table tennis, and believe it or not, at 82 he isn’t the oldest athlete in the games. That distinction goes to Yosef Shachmon, who is 90 and plays tennis.

“The games are like a giant party,” says Weitzman. “There are people from 60 countries, 10,000 Jewish kids competing against each other, and they’ve known each other for years.”

He recounts how at the opening ceremony he saw some contestants from different countries swapping their pants. “That is so cute,” he says. “It’s such friendship.”

Thinking outside the box 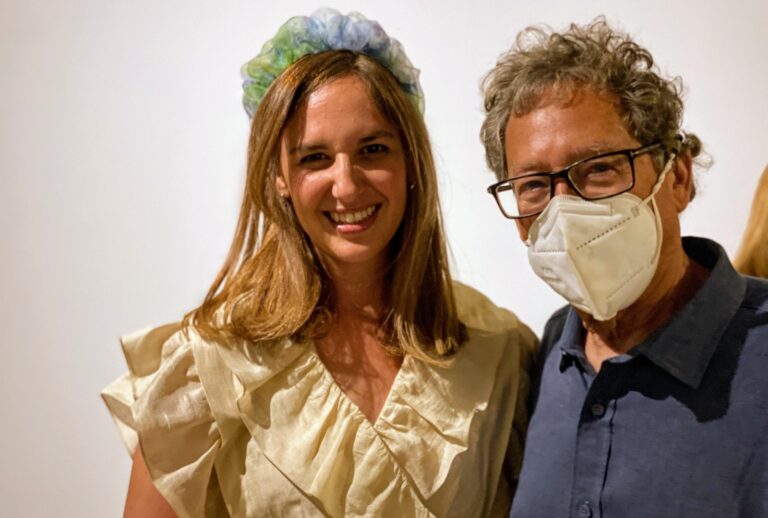 Weitzman may be American, but he thinks and speaks like an Israeli, telling his very receptive audience to think outside the box, to use imagination and to find inspiration from unexpected sources.

“Look at what the cool women are wearing on the street and take inspiration from that,” he says.

Weitzman was born in Long Island in 1941. In the 1950s, his father, Seymour Weitzman, and his older brother, Warren, opened a shoe factory in Massachusetts. But Stuart had other plans. He envisioned a career on Wall Street.

In 1963, however, Weitzman graduated from the Wharton Business School at the University of Pennsylvania and decided to try sketching shoe designs to see how he liked it.

The designs took off, and when their father died in 1965, Stuart and Warren began running the business, with Stuart designing the shoes.

In 1971, Weitzman partnered with a Spanish shoe factory, Caressa. Fifteen years later, he bought back all the shares and became independent.

To gain an entrance into the world of high-end shoes without much funding, Weitzman developed a guerilla marketing approach, long before the concept had even been invented.

Unable to afford top models, he advertised creatively. His first ad featured a pumpkin, and another, which won an award, featured a Dalmatian with black shoe-shaped spots.

He also began offering fancy one-off designs to Oscar nominees at red carpet events. One of these was the Million-Dollar Sandal, adorned with 464 diamonds, worn by Laura Harring at the 2002 awards.

In the years since, his shoes have been worn by the likes of Beyonce, Taylor Swift, Kate Moss and Jennifer Aniston, as well as by Kate Middleton, the Duchess of Cambridge, and Megan Markle, the Duchess of Sussex.

Weitzman uses unique materials such as cork, vinyl, wallpaper and 24-karat gold. Though the shoes are often high heeled, his aim is always function and comfort.

At its peak, Weitzman owned 120 private boutiques and sold all over the world. To this day, the shoes are still manufactured in Spain, enabling the company to keep prices 30-50 percent lower than comparable brands.

Weitzman also urged his audience to give back. He has a philanthropic foundation in Spain and is a member of the board of trustees of the Hispanojudía Foundation, which aims to build bridges between Latin America and Israel.

In 2015, Weitzman sold his company to Coach for $574 million. Two years later, he stepped down and appointed Giovanni Morelli as creative director.

One of the company’s biggest signature brands remains the Nudist, that Weitzman designed all those years ago: stilettos with slim straps and often ridiculously high heels.

They can still be spotted all over red carpets, and though other designers now do the same thing, the style is so synonymous with the Stuart Weitzman brand that Weitzman admits publications often credit the company even when they aren’t his.

After the talk, I meet up with Keren Grinfeld, an Israeli fashion designer studying at Bezalel who modeled the Nudist sandals on stage.

We mingle outside the hall and Weitzman—with seemingly endless energy—is posing genially for selfies with whoever wants them.

Grinfeld still has the shoes on, and seemed reluctant to take them off. 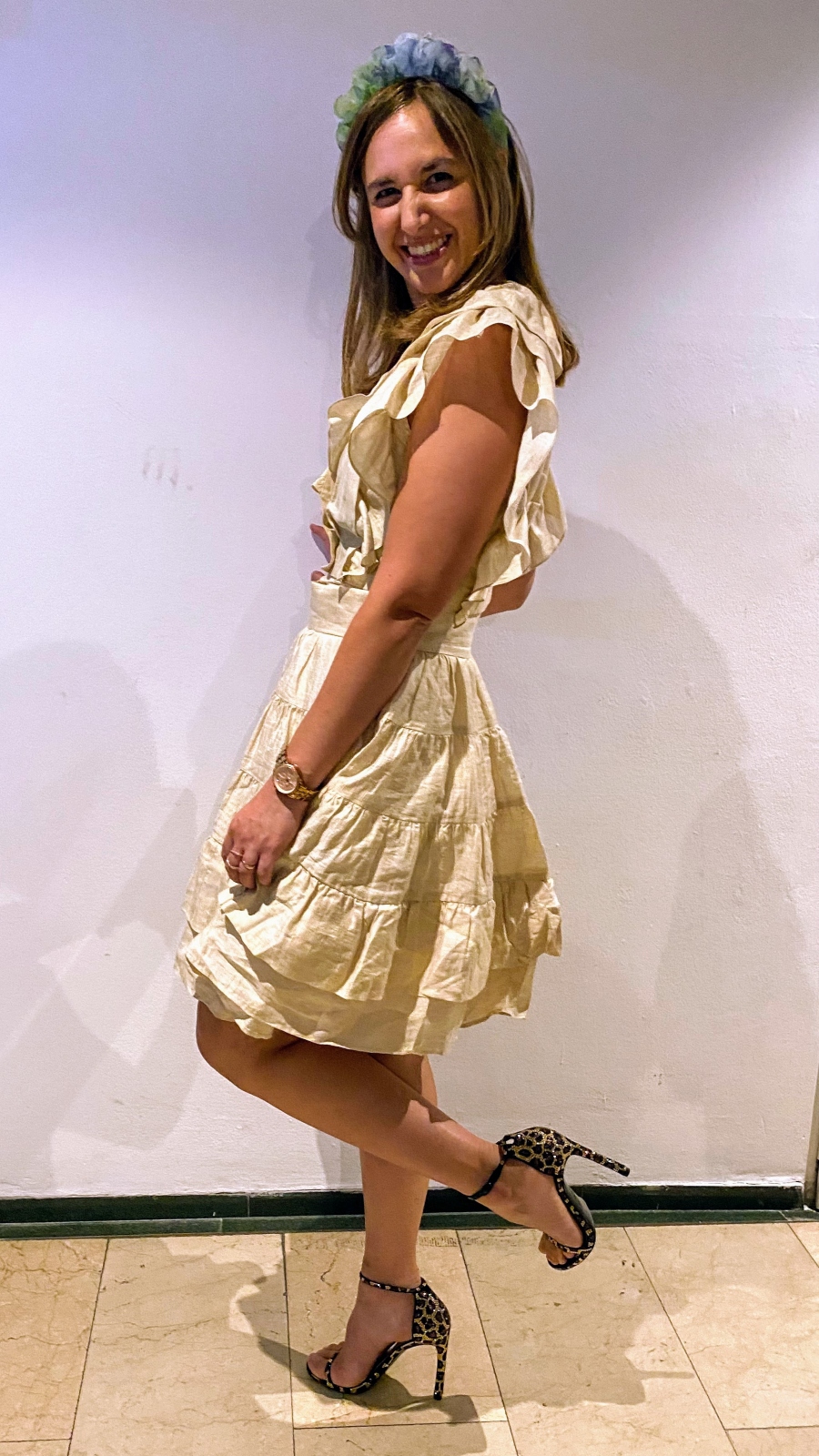 Keren Grinfeld models Stuart Weitzman’s Nudist heels at the Tel Aviv Museum of Art. Will she take them off? Photo by Nicky Blackburn.

“Well, they are high heels,” she says. “But they are comfortable.”

“What did you think of Stuart’s talk?”

“It was so inspiring,” she says. “I have a fashion business of my own and was really debating what to do. Should I be commercial or do what I love? Now I realize, I should do what I love.”

Judging by the many designers and would-be designers waiting to talk to Weitzman after his talk, she wasn’t the only person who left the Tel Aviv Museum with a whole new mindset.

Weitzman will be competing in the Maccabiah on Wednesday, July 20, against three sportsmen, Mark Freedman from Australia, Nahum Shamis from Israel and Abraham Tobal from Mexico.