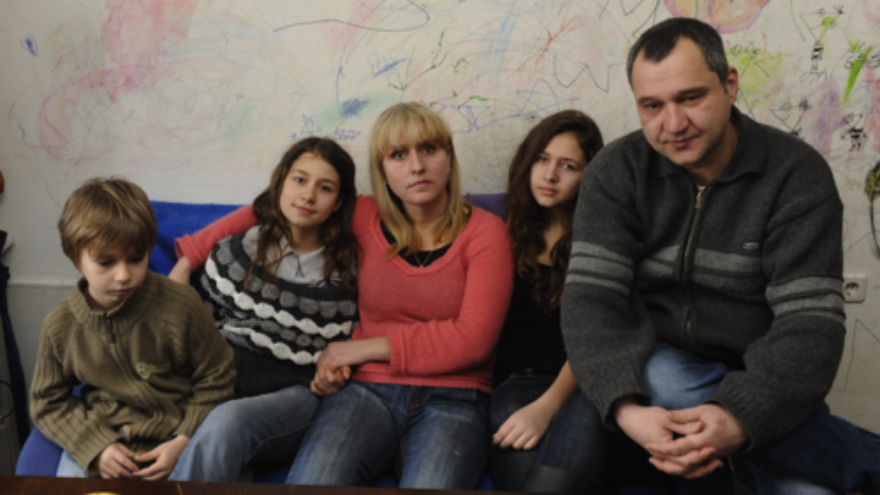 (January 17, 2014 / JNS) When the economic crisis hit Bulgaria in 2011, Yana—a Jewish mother of three—was one of the first casualties. She lost her job as an optician and suddenly her family had to survive on her husband’s meager salary of $500 a month. Bills pilled up quickly, and soon they were $8,000 in debt.

Struggles like that of Yana’s family are sadly common among some European Jews today.

And while our understandable focus tends to be on the rise of nationalism and anti-Semitic political parties, the economic hardships afflicting Europe also pose a dire a threat to Jews. As history has taught us, financial tumult often fuels the ascent of hate and those who sometimes violently express it.

Recently, Eurostat—the European Union’s official statistics bureau—said European jobless rates remained at an all-time high, with an estimated 26.6 million people seeking employment. Places like Spain and Greece have been hit the hardest, with unemployment remaining over 25 percent and unemployment among young adults more than double that.

Jews and Jewish communities have not been immune from this economic downturn, and since 2008 they have turned to us, the American Jewish Joint Distribution Committee (JDC), for help.

The basis of our current approach was forged in Argentina at the end of 2001, when the economy there plunged into unprecedented crisis. Given our history of aiding needy Jews and their families around the world for nearly a century, Argentina’s Jews turned to us.

We began with the assets of the community—everything from bricks and mortar and cash to people. Some of our work concentrated on restoring value to property and investments to generate reliable revenue streams. We also unlocked potential by boosting individuals’ skills and helping them to promote themselves in the job market.

Positive results speak for themselves: since our intervention began, we’ve trained more than 18,000 people in marketable skills, helped 7,000-plus find viable jobs, and helped create more than 400 small businesses through short-term loans.

Since Europe’s economy took a nosedive, we’ve found that this model, adjusted by community, is applicable in the more exposed parts of the Europe. Once more, we’re working with Jewish communities where mass unemployment and poverty is a shock.

Take Bulgaria, where a once vibrant economy (boosted by EU membership) is now buckling under skyrocketing utility costs and an unemployment rate of more than 10 percent (while the real value of incomes is steadily falling). In the capital, Sofia, where most of the country’s 7,000 Jews live, we and our partner, the Shalom organization, now provide emergency in addition to running a soup kitchen and a job training program and center.

Some might question whether the job training center should be a priority, given that the demand for welfare services among Bulgarian Jews has increased by 35 percent in the last year. But that’s precisely the point. For a community to be self-sustaining, it has to both cultivate its most ambitious and determined members in order to keep its members positive in the bad times as well as the good.

This way, when the next crisis hits, it’s the local leaders and communities who are in a position to care for the most vulnerable. That’s why we also help connect people to their community by ensuring Jewish school scholarships as well as subsidized Jewish community activities and holiday celebrations.

That’s important because there is a limit to what governments can usefully do. Government aid necessarily flows from the top downwards. So we invert that process, by putting resources into communities and developing local leaders to manage them.

That’s the advantage of a localized approach: you provide assistance to a group that’s large enough to have meaningful impact, yet small enough for every member to they have a stake in the future.

We know this work will not fend off the Eurozone’s economic troubles, but it’s a model that ensures that Jewish communities—especially vulnerable in times of economic decline—are a source of support and comfort to their people in a critical time of need.