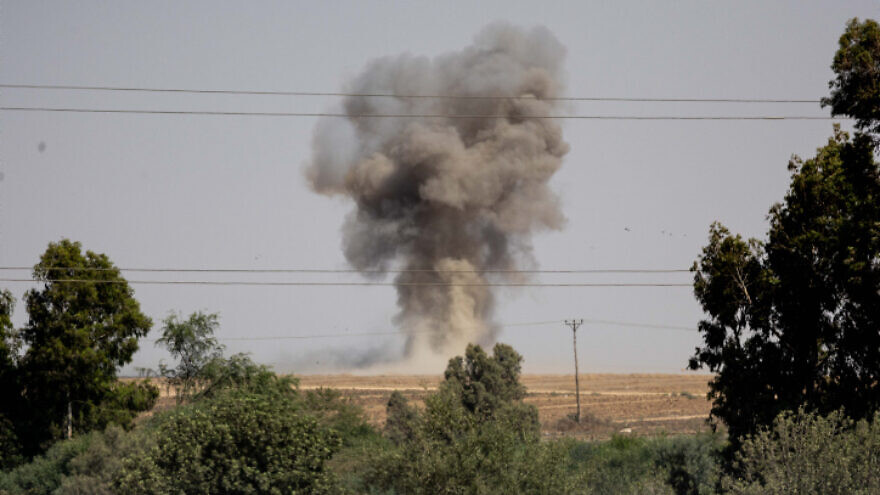 A cloud of smoke rises after a rocket launched from the Gaza Strip hit an open field near Sderot on Aug. 7, 2022. Photo by Yonatan Sindel/Flash90.
Spread the word.
Help JNS grow!
Share now:

(August 7, 2022 / JNS) Terrorists in the Gaza Strip on Sunday night fired heavy barrages of rockets at southern and central Israel, as an Egypt-mediated ceasefire between the sides came into effect at 11:30 p.m. local time.

A statement from the Israeli Prime Minister’s Office confirmed that a truce had been reached, and thanked Egyptian mediators for their efforts.

“If the ceasefire is violated,” the statement qualified, “Israel maintains the right to respond strongly. We will not allow any disruption to the lives of the citizens of the State of Israel.”

According to several media reports, Jerusalem had agreed to an earlier Cairo-brokered truce, but PIJ held up the deal over a demand that Egyptian officials work towards the release of two terrorists jailed in Israel.

Israeli Prime Minister Yair Lapid on Sunday at 9:45 p.m. convened a high-level security meeting at the military’s headquarters in anticipation of an end to the fighting.

The Israel Defense Forces’s “Operation Breaking Dawn” entered its third day on Sunday, as PIJ resumed firing rockets into the Jewish state. As of Sunday evening, terrorists from Gaza had fired some 1,000 projectiles towards Israel since hostilities broke out, according to the IDF.

The Iron Dome missile defense system successfully intercepted 96 percent of the projectiles that were headed for populated regions. About 160 of the rockets fell short in Gaza, killing at least nine people, said the IDF.

The military added that it had struck more than 140 assets belonging to PIJ in Gaza since launching “Operation Breaking Dawn” on Friday afternoon.

The Israel Security Agency (Shin Bet) director reportedly told members of the Security Cabinet on Saturday night that Jerusalem had already achieved most of its objectives in the operation.

Lapid reportedly echoed the sentiment on Sunday when he told leaders of communities located near the shared border with Gaza that the IDF’s “goals have been achieved, there’s no benefit in continuing the mission.”