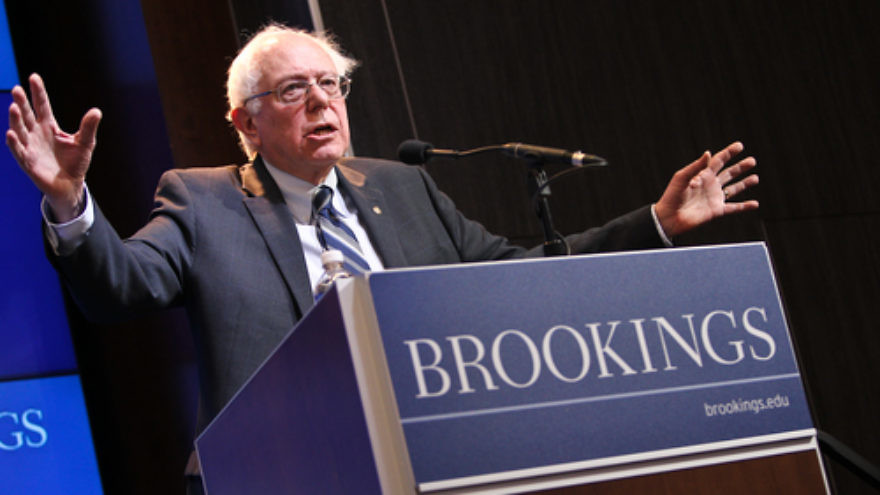 Once considered a long shot for the Democratic presidential nomination, U.S. Sen. Bernie Sanders (I-Vt.) has gained significant momentum in recent weeks. He now trails the presumptive nominee—former secretary of state Hillary Clinton—by only eight percentage points, according to a CNN/WMUR poll released in June.

Sanders had a bar mitzvah and was raised in a “large Jewish community full of striving middle class Jews who wanted to get up through the education system,” said Alan Abbey, currently director of Internet and media for the Jerusalem-based Shalom Hartman Institute but formerly a political reporter for the Burlington Free Press in the early 1980s, when Sanders was first elected mayor of Vermont’s largest city. Abbey described Sanders as a “frumpy” politician who was “really able to connect with people and capture their imaginations.”

“These were working class assimilated Jewish-Americans, and that culture is very deep in his bones,” Abbey told JNS.org regarding Sanders’s upbringing.

Sanders also spent time on an Israeli kibbutz following his graduation from the University of Chicago in the 1960s. Yet in Congress, Israel has been far from the forefront of his agenda, taking a backseat to issues like income inequality, challenging Wall Street, and raising the minimum wage. In the process, Sanders has become someone many consider the darling of the American political left.

“Sanders has been relatively quiet as a senator on Israel issues,” Tevi Troy, who served as the White House liaison to the Jewish community under president George W. Bush, told JNS.org. “Compared to Hillary Clinton, Sanders has been consistent in his role as a backbencher on Israel, while Hillary has gone back and forth a bit.”

Since being elected to the House of Representatives in 1990, Sanders has been the only openly socialist member of either body of Congress.

“I admire his courage. Most people who come from that part of the political spectrum run like hell from the word ‘socialist.’ He is very out front about it,” said Joshua Muravchik, who served as national chairman of the Young People’s Socialist League from 1968-73 but now leans conservative and is a faculty member at The Institute of World Politics.

On his campaign website, Sanders lists “income and wealth inequality, getting big money out of politics, and climate change and the environment” as his top issues, with no mention of foreign policy or Israel. But as a high-profile progressive, he “comes from a part of the ideological spectrum that has become extremely hostile to Israel,” noted Muravchik, author of the 2014 book “Making David Into Goliath: How the World Turned Against Israel.”

“Even if Sanders is relatively quiet on Israel, there’s a good chance that his leftist supporters are more critical,” echoed Troy.

At the same time, while Sanders has kept his distance from his Jewish identity over the course of his career, he has not been able to completely escape it. Abbey said Sanders faced some anti-Semitism during his campaign for mayor of Burlington in 1981.

“When Bernie was gaining steam in the local political campaign, blatant anti-Semitism bubbled up as a tool to try and discredit him,” said Abbey. “They would use phrases like ‘Bernie is from New York,’ which in some places is code for Jew.”

More recently, in an interview on National Public Radio (NPR) in June, host Diane Rehm mentioned that Sanders has “dual citizenship with Israel.” The senator was offended by that false statement.

“No, I do not have dual citizenship with Israel,” he said. “I’m an American. Don’t know where that question came from. I’m an American citizen. I have visited Israel on a couple of occasions.”

In an interview with the Christian Science Monitor following the NPR incident, Sanders said he is “proud to be Jewish” but that he is “not particularly religious.”

On Israel, meanwhile, Sanders’s record is a mixed bag. In particular, last summer’s conflict in Gaza brought to light his complex feelings on the Arab-Israeli conflict. Sanders was one of 21 of 100 U.S. senators not to sign on as a co-sponsor to Senate Resolution 498, which expressed support for Israel “as it defends itself against unprovoked rocket attack from Hamas.”

But during a town hall meeting last August in Cabot, Vt., when Sanders was verbally attacked by pro-Palestinian activists who yelled expletives at him for condemning Hamas for firing rockets at Israeli civilians, Sanders responded to the hecklers with pro-Israel comments.

“You have a situation where Hamas is sending missiles into Israel… and you know where some of those missiles are coming from? They’re coming from populated areas,” Sanders said. “Hamas is very clear. Their view is that Israel should not have a right to exist.”

After the activists replied to him, “Bullshit, F**k Israel,” Sanders went on to explain that there are more pressing issues in the Middle East, such as the Islamic State terror group, which he condemned for attempting to turn parts of Iraq and Syria into a “7th Century caliphate” that is suppressing women’s rights.

During the same meeting, however, Sanders described Israel’s Operation Protective Edge in Gaza as an “overreaction.”

Sanders has also been outspoken in his criticism of Israeli Prime Minister Benjamin Netanyahu. In the recent NPR interview with Rehm, he said he is “not a great fan of Netanyahu.” He was also the first senator to announce that he would boycott Netanyahu’s much-debated speech to Congress in March. Sanders called the speech “opportunistic” and said he thought Netanyahu was using it as part of his campaign for re-election in Israel.

“I think that [Sanders] may try to straddle the issue [of Israel], but the base that he is trying to appeal to has gone overwhelmingly to the anti-Israel camp,” Muravchik told JNS.org.

That same base, however, has been at odds with Sanders on other issues. Many on the left slammed him for siding with the National Rifle Association in his backing of a law that blocked families who lost children to the 2012 Sandy Hook Elementary School shooting from winning a lawsuit against gun manufacturers.

Abbey believes Sanders’s willingness to go against liberals on certain issues counters a fundamental misunderstanding of what type of “progressive” the Vermont senator really is.

“It is interesting to look at his relationship with the left,” Abbey said. “Sanders is an old left-wing politician, more akin to a 1930s blue collar socialist working-class type.”

For example, Abbey said, “When he was mayor of Burlington, anti-war protesters were pressuring General Electric, which owned a factory that made machine guns, to shut down. Bernie had a lot of pressure on him, but when it came to supporting labor union workers who would lose their jobs versus the pie in the sky anti-war leftists, Bernie sided with the workers.”

When it comes to Israel, then, would a Sanders presidency resist the increasingly hostile views of his leftist base, or would he conform? A recent study by pollster Frank Luntz found that nearly half of U.S. Democrats—47 percent—believe Israel is a “racist” country, while an additional 76 percent of Democrats agree that Israel has “too much influence” over U.S. foreign policy.

The historical roots of Sanders’s ideology are also a cause for concern, according to Muravchik.

“Sanders’s form of socialism in the 1960s and 70s is to the left of Norman Thomas (a former socialist leader in the 1930s who unsuccessfully ran for president six times), and he was more Marxist than Thomas ever was,” Muravchik said.

“That is a place on the ideological spectrum that is very warm to America and Israel’s enemies,” he added.

Abbey believes that Sanders would continue many of the same policies as President Barack Obama on Israel and the Middle East. Obama and Netanyahu have had a rocky relationship, particularly regarding their disagreements on how to deal with Iran’s nuclear program. Nevertheless, Abbey feels that due to his Jewish upbringing and the time he spent in Israel, Sanders as president would bring a unique understanding about the Jewish state.

“I think there would be a piece of Bernie that would understand Israel and get the Israeli mentality more than Obama has and even Hillary Clinton would, despite her close contacts with Israel and American Jews over the last few decades,” Abbey said.

“Bibi (Netanyahu) and Bernie would certainly disagree on many issues, but they would do it from a place of deep understanding and respect,” he said.