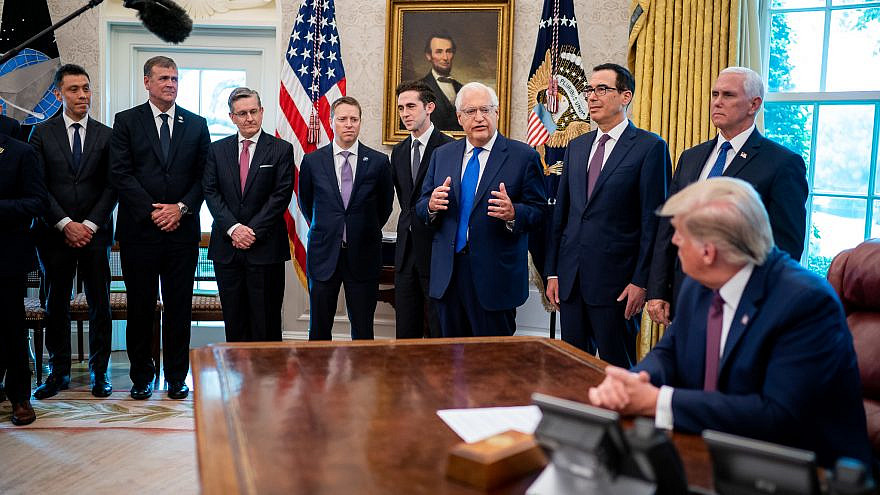 (December 1, 2020 / JNS) U.S. Ambassador to Israel David Friedman detailed the negotiation process that led to the signing of the Abraham Accords, as well as talked about the future of other Arab countries expected to normalize relations with the Jewish state, in a virtual event on Tuesday.

The agreements signed by Israel, the United Arab Emirates and Bahrain on Sept. 15, as well as the normalization agreement between Israel and Sudan signed on Oct. 23, are “all working beautifully,” the ambassador said during a Zoom event hosted by the Friends of the Israel Defense Forces (FIDF). “I think there’s no going back. I think we’re really onto something extraordinary.”

When the Abraham Accords was announced by the White House on Aug. 13, the world should have seen it coming, said Friedman, who is helping to host a 40-person Bahraini delegation in Israel on Tuesday night.

“This was really a priority of the Trump administration since the day it began,” he said. “It was a shocking surprise that was four years in the making, and I think the momentum will continue.”

Among the nations involved in the Abraham Accords, Friedman said negotiations with UAE “was the hardest one” and posed the most challenges. One reason was that they asked if Israel could delay its sovereignty declaration regarding Judea and Samaria in order to advance the peace process.

‘We saw something different’

The ambassador also derided former U.S. Secretary of State John Kerry, who was recently tapped to serve in the Biden administration on climate change issues, for making the “spectacular mistake” of saying in late 2016 that it was impossible for Israel to normalize relations with Arab countries without first making peace with the Palestinians.

“We thought there was more opportunity than perhaps Secretary Kerry did at the time,” said Friedman, saying President Donald Trump “decided to test this proposition” by traveling to Saudi Arabia on his first trip out of the United States and addressing leaders of 50 Arab nations before heading to Israel to discuss peace talks between nations in the region.

“Why did he get it so wrong, and why did we get it right?” Friedman said about Kerry. “Well, we saw something different. We saw the Gulf as having far more in common with Israel than he did. We saw the Gulf having national interests that were largely in line with those of Israel. … I think he took the conventional wisdom that the Palestinians could hold the entire region hostage. We knew that they couldn’t.”

“Everyone wanted fairness for the Palestinians—opportunity, autonomy, dignity—but the days of a Palestinian veto at the expense of regional stability and prosperity are gone,” he continued. “The UAE, Bahrain, Sudan and other Arab nations … they can’t be expected to care more about the Palestinian people than the Palestinian leadership itself.”

The ambassador also talked about what factors would facilitate other Arab nations to join Abraham Accords.

He said, “I think we need to recognize that if we don’t continue along this path, it’ll be a massively lost opportunity. I think that if we keep up strong support for Israel, strong support for its Sunni allies and future allies, and most importantly, if we can maintain our position with regard to Iran—basically no terrorism, no ballistic missiles, no nukes—and we keep sanctions on until we get to that outcome, I think we will change the Middle East for the next 100 years.”