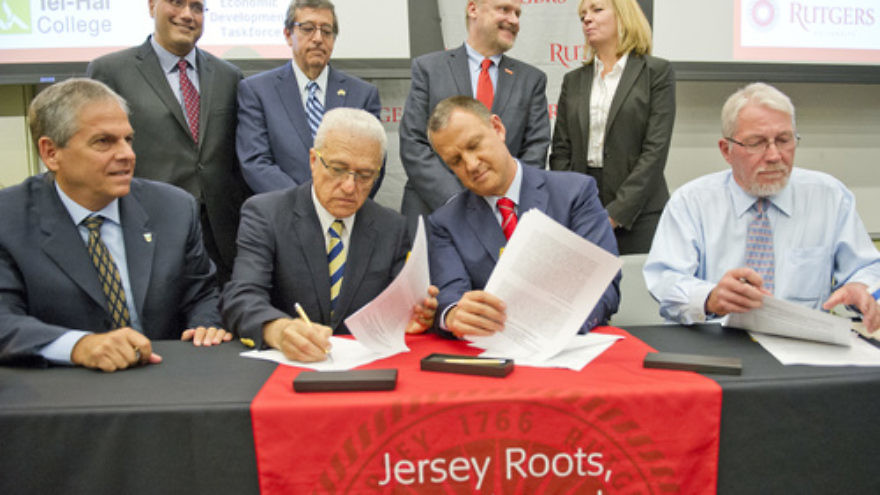 Food innovation is the next course in the storied U.S.-Israel partnership.

When the two men sat next to each other at a food technology conference this past June at Tel-Hai College, they realized how much their professional interests overlapped. Margalit had developed two technology incubators—Cyber Labs in Be’er Sheva and the Media Quarter near the old train station in Jerusalem—and he now chairs the Knesset Task Force for Economic Development in the North and South.

In his quest to transform Israel’s Galilee into a business and innovation hub, Margalit says he has worked to “put together plan that gives a new dimension to Israeli high-tech combined with Israeli agriculture, food development, life sciences, and research, and putting it in a technology start-up environment.” Similarly, in New Jersey, Cooperhouse’s Food Innovation Center is a business incubation and economic development accelerator program whose clients include 100 start-ups.

For students and faculty, a memo of understanding signed by Rutgers and Tel-Hai on Sept. 18 supports research collaboration, entrepreneurship education, exchange programs, and experiential learning. Israeli businesses will get access to incubation opportunities at the Rutgers Food Innovation Center and assistance in finding partners for joint ventures.

Cooperhouse is impressed with Israel’s robust start-up incubator network, attributing it in part to government investment.

“The Office of the Chief Scientist of the State of Israel is arguably why Israel has developed so much technology and is called the ‘start-up nation,’” something that neither U.S. state governments nor the American federal government do to the same degree, Cooperhouse tells JNS.org.

Both Margalit’s Galilee initiative and Cooperhouse’s Food Innovation Center got the ball rolling on the partnership by bringing together important stakeholders in the food industry. To jumpstart technological development in Israel’s north, Margalit invited leaders of area cities, towns, and kibbutzim to participate in the revitalization effort he is spearheading in that region.

“On their own, [the individual Israeli municipalities] were too small to matter for the country in a big way,” Margalit tells JNS.org. But by working together, he believes, they can become a creative force to transform the Galilee, a region that today has more poverty and a lower life expectancy than anywhere else in Israel.

Cooperhouse says the Food Innovation Center’s success derives from an economic cluster model, in which the center united diverse groups in the food industry from academic research organizations, to trade associations, to state and federal agencies.

“Our success [comes] because we have aggregated these resources, have an advisory board of all the major stakeholders in the food industry, and service the entire state,” he says. “We looked at all the resources around the food industry…and got us all working toward a common goal.”

The alliance between Rutgers and Tel-Hai will jointly support this cluster model in New Jersey and Israel around the subcategories of healthy, functional, and medical foods. Healthy foods provide basic nutrients that promote general health and wellness; these may be foods like milk substitutes from plants or coconut milk ice cream, which are alternatives to animal-based products that are unsustainable over the long term or to foods that have too much sugar. Functional foods provide a benefit toward a particular goal, like caffeinated beverages that can increase alertness, probiotics in yogurt that can help with digestion, or gluten-free foods for those with celiac disease. Medical foods are those clinically proven to prevent, alleviate, or mitigate a medical condition, such as Pedialyte, which is used for rehydration in kids. Medical foods are regulated by America’s Food and Drug Administration.

The new alliance will also explore personalizing food based on individuals’ metabolic makeup and will examine public policy regarding food.

“These areas are at the intersection between food and pharma, between the amazing life sciences industry and the food industry,” Cooperhouse says. “The goal is hopefully [that] someday we will all be taking fewer pills, eating better, and maybe eating foods that have some clinical efficacy that can mitigate disease or be proactive for health and wellness.”

Since costs for developing a medical food fall in the $30-$40 million range, far less then the billion-dollar price tag for creating a new drug, these products can work well in a start-up environment. Some medical food products that are currently being researched in Israel include a potent antioxidant pill from a seaweed extract and pomegranate extracts for kidney problems. Products may also be derived from ancient plants used by Arabs and Druze for medical and therapeutic purposes, for example, a plant said to grow on the slopes of Mount Hermon that improves sexual potency more than Viagra.

As Israel is such a small country—in fact, its size is often likened to that of New Jersey—creating global connections is critical for its economy. Cooperhouse notes that in many cases, Israeli businesses “feel like they are on an island because they can’t export to their neighbors, so they need international partners to really grow their businesses.”

With the help of the new alliance, Margalit will be working to deepen Israel’s food-related business community in the Galilee. One such effort involves helping Israeli food companies establish U.S. operations. Margalit says he sees the Rutgers Food Innovation Center as “a very natural partner if Israel is going to partner with the U.S. in a big way.” Particularly important will be the center’s “soft landings” program, which educates international companies in market research, government regulation, distribution systems, product development, and engineering issues.

Also important to Margalit is attracting international companies to set up operations in Israel.

“What we want is for major food companies from around the world…to set up a research center here for either developing new food products which are healthier or getting into the therapeutic dimension as well,” Margalit says.

What drives Margalit is more than economics. He sees the cluster concept as the basis of a social process that can create dynamic communities in Israel’s north that attract young Israelis to settle and raise families there. He explains, “My daughter just graduated from Tel-Hai College; she’s in love with her boyfriend, and they are dying to stay in the north, but they will only stay if they find high-quality jobs.”

As much as they love the north, this educated and talented generation will stay in the Galilee only “if there are knowledge-based jobs that they are intrigued by, or at least a path to one,” Margalit says. To draw young adults to places other than the Tel Aviv area, he suggests, northern Israel will also need more culture and live music—at present, there is no movie theater north of Haifa.

“The creative class needs to rise in the Galilee,” Margalit says. “We can’t keep calling the north the periphery.”