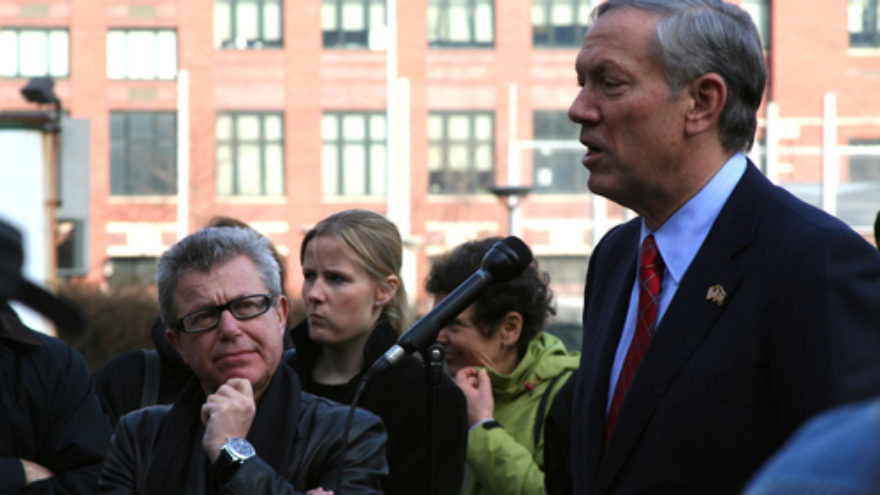 (April 29, 2015 / JNS) From his childhood, to his time as mayor of his birthplace, to his three terms as governor of New York State, George Pataki fostered a close relationship with the Jewish community. If he decides to run for president in 2016, a much broader Jewish constituency will get acquainted with Pataki.

“I grew up in this little town of Peekskill, [N.Y.], but it was a very ethnically diverse town,” Pataki, who is Catholic, said in an exclusive interview with JNS.org. “I went to many a bar mitzvah and talked to many of my Jewish friends and their parents, primarily about Israel. I developed my jump shot in basketball at the synagogue in Peekskill. And then when I first got elected to office and was mayor [of Peekskill], I was pleased to welcome a yeshiva, Ohr HaMeir, to our community, and help them make sure that the community embraced them with open arms. [Judaism] wasn’t something I was unfamiliar with growing up, and I am pleased that I have had the opportunity to get to know so many members of the Jewish community in New York so well over the course of my time as governor and even before that.”

The 69-year-old Pataki, New York’s Republican governor from 1995-2006, has flirted with a presidential run multiple times before, but never threw his hat in the ring. This time, he said he is “far closer to making a favorable decision to run than I’ve been at any point in the past.”

“I’m encouraged by the reaction I’ve gotten [to my possible presidential run] when I’ve been out speaking with people, and when I look at the world, and look at Washington, DC, I believe the need to change the direction of our government has never been greater, certainly not in decades,” said Pataki, describing that he is leaning “very strongly towards running.”

Pataki knows a thing or two about the Jewish vote, having governed a state with more Jews (1.8 million as of 2014) than any other in the country. In fact, he has a strong history with Jewish voters for a Republican. Prof. John Mollenkopf, director of the Center for Urban Research at The Graduate Center of the City University of New York, told JNS.org that based on a demographic analysis of New York City (not statewide) election districts that he performed for the state’s 2002 gubernatorial race, Pataki “got an above-average share” of Jewish voters for a Republican, 40-45 percent, and “definitely won the [city’s] Orthodox neighborhoods by about 3 to 1.”

Asked how Republicans could improve their performance among the historically liberal Jewish electorate, Pataki said he prefers to leave such questions to the analysts and reserve his own energy for policy.

“I think it’s a mistake for a politician to say, ‘I’m going to do this because it appeals to this group, or that for another group,’” he said. “I just try consistently to do what I can to advance policies that are right for the constituencies I represent. I’m very proud and grateful for the tremendous support I got from the Jewish community in New York over the 12 years I served as governor, not just in elections, but in advancing ideas and principles.”

He added, “Whether it’s needing to reform our tax code so we can have a stronger economy… or standing with our allies, in particular Israel, as they face incredible challenges in the 21st century, these are not in my view issues for a constituency. These are issues for America.”

Pataki visited Israel four times as governor, including in 1998 to open the bilateral trade mission between the Jewish state and New York.

“It was shocking to me that New York and Israel did not have a trade mission, and we opened it, and I’m proud to say, in Jerusalem, because Jerusalem is the capital of Israel, and that’s where we thought we should have it,” he said.

In 1995, about a week after he presented Israeli prime minister Yitzhak Rabin with a presidential medal at the Intrepid Sea, Air & Space Museum in New York City, Pataki attended Rabin’s funeral in Israel.

“It just pointed out to me how a military man, a man of war, could be a strong leader in peace, and how we have to stand together against terror or violence whatever the source is,” Pataki said of Rabin, who was an Israel Defense Forces general but also signed the 1993 Oslo Accords with the Palestinians before he was assassinated by Yigal Amir.

Regarding the ongoing nuclear negotiations between world powers and Iran, Pataki said the best approach for America is “to stand side by side with Israel.”

“You don’t negotiate from weakness, you negotiate from strength, and sadly I fear that this president (Obama) has been so desperate to make a deal with the leading state sponsor of terror in the world that he has gone way too far to accommodate the demands of the Iranians and in the process, potentially placing the civilized nations of the world at risk,” he said.

Pataki also blasted the Obama administration’s “apparent unwillingness to understand not just the Israelis’ concern about the status of the negotiations with the Iranians, but the Saudis, the Jordanians, the [United Arab] Emirates, Egypt—so many Muslim Arab countries who share Israel’s deep concern that this sponsor of state terrorism is apparently driving the terms of what this president seems desperate to get, which is a deal to lift the sanctions [against Iran].”

Obama, who declined to meet with Netanyahu when the prime minister visited Washington, DC, in March, will reportedly continue to refuse an in-person meeting with Netanyahu until after the June 30 deadline for a final nuclear deal with Iran. While the U.S. and Israel are not “going to always have 100-percent consistent policy agreement,” the two nations “are very important friends and allies, and you never treat someone like the prime minister of Israel with the disrespect that this president has shown towards him,” Pataki told JNS.org.

When asked about his views on a two-state solution to the Israeli-Palestinian conflict, Pataki lamented the U.S.-brokered peace talks of 2013-14 between the two parties, calling it “an embarrassment and a waste of time for our secretary of state (John Kerry) to spend so much time negotiating with the Palestinians on the hopes of advancing a peace process.”

“You need to have a true partner for peace,” Pataki said. “The Palestinians need to recognize, unequivocally, Israel’s right to exist. Israel has to be comfortable that such an expression is meaningful, and at that point perhaps negotiations could be productive. But to me, it’s just a symbol of weakness and really dangerous for us to spend so much time negotiating with an entity that clearly at this point is not prepared to take any steps towards peace.”

U.S. Sens. Ted Cruz (R-Texas), Rand Paul (R-Ky.), and Marco Rubio (R-Fla.) have already announced their presidential campaigns on the Republican side, and unannounced former Florida governor Jeb Bush is considered by many to be the early favorite to win the GOP nomination. Pataki may not be getting the same level of attention as the other official or rumored Republican candidates, but feels he would bring a strong track record of success to the race, saying his party needs to “nominate someone who can point to achievements as opposed to just rhetoric.”

“Having served 12 years as governor, when I talk about making us safer [in New York], I did it,” Pataki said. “When I talk about dramatically reducing the size of government, I did it. When I talk about lowering taxes, I did it… I think we have to have a nominee who appeals to the Republican base and electorate, but also beyond that, to independents and enlightened Democrats. When you can win in a state like New York not just once, but three times, and by the largest majority ever for a Republican in the history of New York State, I think it shows an ability to appeal to a broader electorate… We need to show the ability to govern successfully, and we need to have a vision for the future that Americans can identify with. On all of those, I’m optimistic that if I choose to run, I will be able to say ‘yes’ to every one of those questions.”