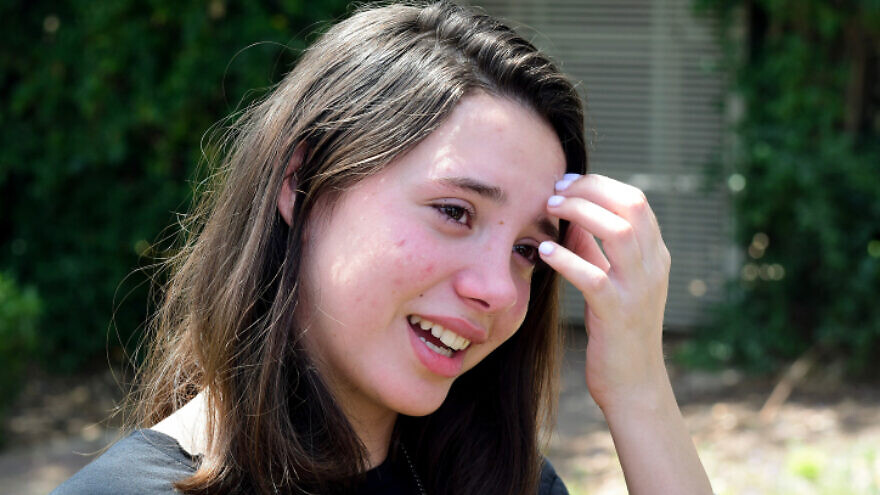 Osher Khnum, the girlfriend of Sgt. First Class Amit Ben-Yigal, killed after being struck in the head by a rock during a military operation, speaks with the media outside his home in Ramat Gan, May 12, 2020. Photo by Avshalom Sassoni/Flash90.
Spread the word.
Help JNS grow!
Share now:

(May 12, 2020 / JNS) In an interview with reporters on Tuesday, the girlfriend of an Israel Defense Forces’ soldier killed during an arrest operation near Jenin when a resident threw a cinder block at his head, recalled his love for his country and demanded that the government avenge the death of her boyfriend, who she said was “not killed, he was murdered”.

Sobbing while speaking to reporters, Osher Khnum, the girlfriend of 21-year-old Amit Ben-Yigal, cried that he “loved his country so much.”

“He told me on Memorial Day that if he has to die, he wants to die for his country,” she said.

“He was very excited to go out on the operation yesterday; he said it was for the sake of the country,” she said, referring to the mission Ben-Yigal was sent on in order to arrest terror operatives on the Palestinian Authority-controlled town of Yabad in Israel’s north.

“But he didn’t die. He was murdered,” she cried. “They murdered him.”

Clutching a cup of water, Osher called for vengeance. “They should revenge him; they should do something,” she said.

She broke down as she recalled that he had promised to return to see her at the end of next week, and that in the meantime, he would take care of himself.

According to Osher, Ben-Yigal had just two months left in his service as an elite Golani Brigade soldier.

His father, Baruch Ben-Yigal, told Kan news on Tuesday that Amit, his only child (and the eldest of his mother’s three children), broke down in tears after a trip to Poland to visit the Nazi concentration camps with his school, and told his father that he realized the importance of Israel on his trip and wanted to go into a fighting unit.

Though IDF service is compulsory in Israel, families with just one child are not obligated to send their child to a fighting unit in order to prevent such a tragic loss. However, children who want to serve in combat units may do so if their parents agree to sign a waiver.

According to Baruch, he had reluctance to sign the waiver, but Amit insisted that “we have no other country” and convinced his father to support his decision.

Video recordings of the interviewers showed them wiping tears as the father, a schoolteacher who said he taught love of the land and State of Israel in his classes, said he was “broken, destroyed” by Amit’s death.

Attempting to smile, she said, “We will always remember him, always.”