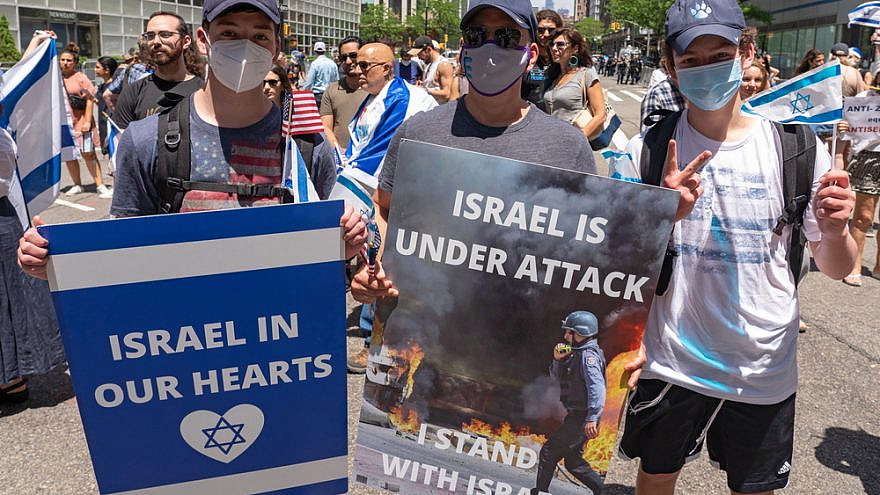 A rally in solidarity with Israel and in protest against rising levels of anti-Semitism, New York City, May 23, 2021. Credit: Ron Adar/Shutterstock.
Spread the word.
Help JNS grow!
Share now:

(January 2, 2022 / Jewish Journal) When the Simon Wiesenthal Center released its annual Global Anti-Semitism Top Ten on Dec. 28, the lineup was starkly different from its predecessors as the Center has shifted from citing individuals to naming their corporate bosses.

“We made a pivot,” explained Rabbi Abraham Cooper, longtime associate dean of the Center, “to incorporate those who are ultimately responsible for what is done under their name.”

To underscore the change, Cooper said at a press conference, “I am sure you know that we have the BBC at No. 3, Deutsche Welle, a massive global German media outlet worldwide, at No. 7, and Unilever [of which Ben & Jerry’s Ice Cream is a wholly-owned subsidiary] at No. 10.”

Since anti-Semitism has become increasingly mainstream in social and political life here and abroad, the Center is “looking for accountability and corporate responsibility. We are holding the gatekeepers responsible for the unfortunate situations that have evolved.”

Seven groups or companies are making their first Top Ten appearances, while Iran, Hamas and Germany are repeaters.

“There is no greater existential threat to the Jewish people than the growing nuclear threat from the antisemitic, Holocaust-denying, terrorist-sponsoring, human-rights-abusing Iranian regime.”

“On the same day a London rabbi was attacked outside of his synagogue, a caravan of cars flying Palestinian flags roamed the city’s largely Jewish Golder’s Green neighborhood, chanting over a loudspeaker “F—the Jews and rape their daughters.”

“On Hanukkah, a group of Muslims attacked a bus filled with Jews in the center of London, and the BBC falsely reported that anti-Muslim slurs could be heard from the bus.”

“For wholesale use of Nazi images and icons by elements of the anti-vaxxer movement.”

On Hanukkah, “JVP launched an eight-day campaign: ‘Come celebrate Hanukkah this year building a radical, loving, anti-Zionist Jewish movement for liberation. … We rededicate our resolve to be bold and win against all that is life-taking and land-grabbing.’”

While “no idea, movement or product can sustain itself and flourish without access to social media, unfortunately in 2021, major companies (Telegram, Twitter, TikTok, Facebook) have done precious little to degrade the marketing capabilities of anti-Semites and racists.”

While a Jewish community commissioner says there are at least three antisemitic attacks daily in Berlin, Deutsche Welle has been forced to suspend five employees for their roles regarding anti-Jewish comments by its Arabic service members.

The latter is a Washington, D.C.-based environmental movement that “opposes Zionism and any state that enforces its ideology.” The executive director of CAIR’s San Francisco Bay Area affiliate accused “Zionist organizations” of being “enemies,” and warned of “Zionist synagogues.”

The administration “consistently has failed to act effectively against overt Jew-hatred. Yasmeen Mashayekh, an engineering student at USC’s Viterbi School, makes no secret that she hates Jews and the Jewish state.” Last May she sent a social media message: “I want to kill every mother—Zionist.” She serves as one of USC’s diversity, equity and inclusion senators. The school removed her from their website as a student senator, yet has not expelled her. “When special efforts are being made to protect and encourage minorities, USC President Carol Folt gets an ‘F’ for allowing this travesty to continue.”

Above a photo with the message “Ben & Jerry’s is Boycotting Israel. Stop Selling Anti-Semitic Ice Cream,” Rabbi Cooper writes: “It is about Ben & Jerry’s ice cream company’s profits being leveraged by an activist, anti-Semite who hates Israel and defends Hamas—and the corporate executives at Unilever letting it stand.” After the Wiesenthal Center ran full-page ads in Jewish publications to cancel the boycott or suffer consequences, Unilever has been placed on the divestment lists of Illinois, New York, New Jersey, Arizona and other states.

“The Top Ten includes institutions we never thought we would have to include,” he said.

“Unfortunately, antisemitism is a dangerous fact of life in two great democracies, Britain and the United States of America. That is why we have to do something.”

For the Top Ten list and comments, see https://www.wiesenthal.com/about/news/simon-wiesenthal-center-top-ten-2021.html