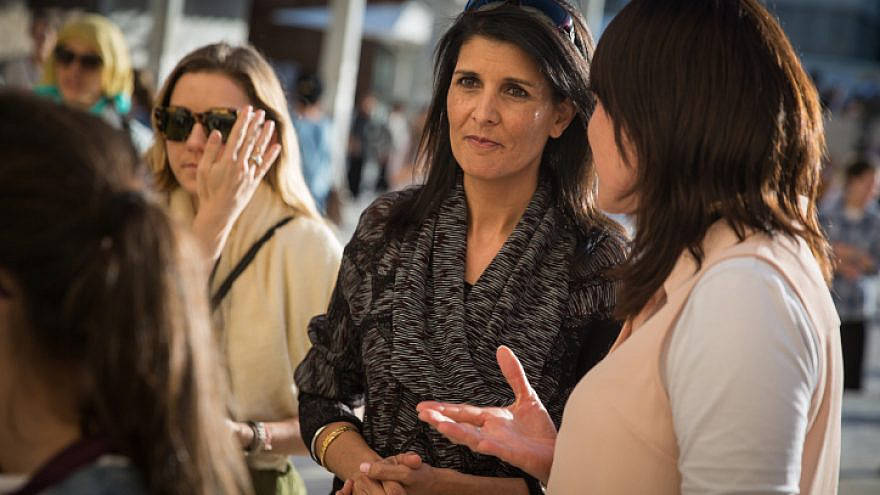 (June 13, 2021 / Israel Hayom) Former U.S. Ambassador to the United Nations Nikki Haley joined evangelical leader Pastor John Hagee, the founder and chairman of Christians United for Israel (CUFI), on a solidarity mission to the Jewish state over the weekend.

The CUFI delegation said on its website last week that it would visit communities “impacted by the recent fighting between Hamas and Israel, meet with leaders representing various viewpoints across the Israeli political spectrum, and visit several holy sites in Jerusalem.”

Haley, who is expected by many to run in the Republican primaries ahead of the 2024 presidential election, said on Sunday from southern Israel that “Israelis have the right to feel safe and defend themselves. We’re not going to let this go. We will make sure that we’re loud about what the root cause of this is. Israelis deserve to be safe in their home.”

She added: “If you had 4,500 rockets that went into [Washington] D.C., if any of our allies said we need restraint on both sides, we wouldn’t be appreciative of that. This is a civilian area; where is the [U.N.] Security Council, where is every government that believes in democracy and freedom? Any country that believes that we need to get rid of terrorist organizations around the world” should be asking what they did to help Israel.

“I’m angry,” she added. “This shows you what Hamas is trying to do. To kill civilians and Israelis are trying to defend themselves. Any dollar that goes to Gaza and Hamas, this is what they will use their dollars for. The idea that Israelis have to defend themselves over and over while a terrorist organization lies free and is able to attack innocent civilians … is unacceptable and the world needs to respond to this. It shouldn’t be Israel fighting alone. It should always be that the world is united against any terrorist organization. Tell me where there is a government office here; show me an Israeli government official. This was them trying to hurt the heart of Israel.”

Hagee also voiced his unreserved support for the Jewish state.

“Five thousand rockets. This rain of terror is made possible by Iran. Hamas is a terrorist organization. Anytime America gives money to Iran, Iran will take that money and make rockets and give them to Hamas so that rockets can fall on Israel. We need to be very cautious about our relationship with Iran and we need to stand by Israel in a more definitive and forceful way so that this nation can protect its citizens from the evil empire of Iran,” he said.

On Saturday, the former governor of South Carolina prayed at the Western Wall in Jerusalem and wrote on Twitter: “No matter the challenges, the people of Israel always celebrate life and thank God for their blessings. It’s humbling to join them again in prayer at such a holy place.”

Haley added: “In a world where antisemitism is on the rise and there are growing calls for Israel’s destruction … it’s an honor to join CUFI’s solidarity mission with Israel and her people.”

Christians United for Israel describes itself as the largest pro-Israel organization in the United States, with over 10 million members.