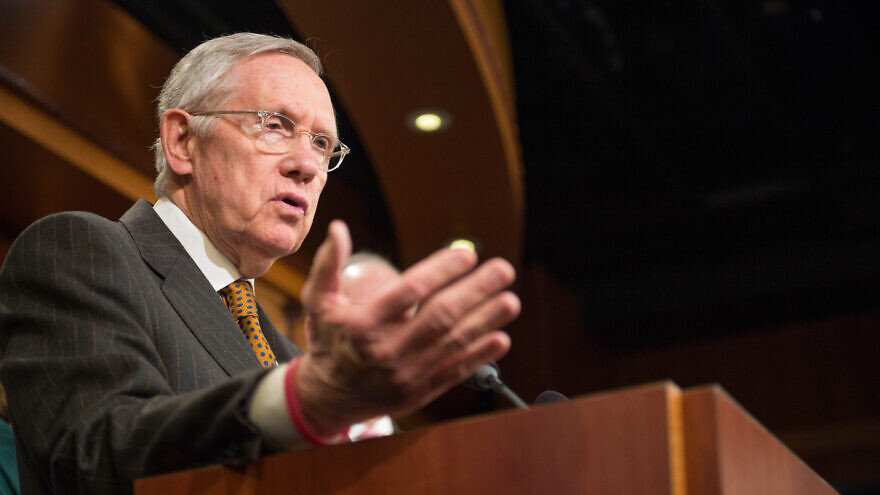 (January 5, 2022 / JNS) Former Democratic leader Sen. Harry Reid (D-Nev.), who will lie in state at the U.S. Capitol next week, was remembered by Jewish leaders and former staff as someone who deeply respected the Jewish community and promoted the U.S.-Israel relationship.

Reid died on Dec. 28 after a four-year battle with pancreatic cancer. He held various leadership positions in the Senate, such as minority and majority whip as well as minority leader, before becoming majority leader in 2007—a role he held until Democrats lost the Senate in 2015, at which point Reid reverted back to minority leader.

“Harry Reid was whip-smart, strategic and a leader almost as no other,” Democratic strategist Steve Rabinowitz, who served as President Bill Clinton’s White House director of media affairs and has promoted Jewish causes as a publicist, wrote in an email. “Combined with the recent loss of former Republican leader Bob Dole, I believe we’ve lost a generation of Congressional leaders we will likely never replace.”

Jeff Mendelsohn, executive director of Pro-Israel America, wrote in an email that Reid “always understood the critical leadership role he played in advancing support for pro-Israel legislation that strengthened the alliance between our two countries so that we could continue toward the path of shared peace, security and prosperity.”

Reid, a Mormon, was also fascinated with the Hebrew Bible and discussed it with regularity. His wife, Landra, was Jewish. Mark Mellman, president of Democratic Majority for Israel, as well as president and CEO of the Mellman Group who conducted internal polling for Reid’s campaigns, said Reid often spoke about how his five children were considered Jewish under Israel’s Law of Return.

“That was a great pride for him, but also a point of identification with Israel,” he said.

Regarding Reid’s personality quirks, Mellman remembers that he had a habit of never saying goodbye at the end of a conversation. “You would be talking to him, and all of a sudden, he will just be gone,” said Mellman.

In high school, Reid was a boxer and Mellman recalled a visit to Reid’s office by current Israeli Foreign Minister Yair Lapid, who himself was an amateur boxer.

“He and Reid started talking about boxing, and I dare say that Reid has never talked to another political leader who knew as much about boxing,” recounted Mellman. “It was quite a conversation.”

‘A great friend of the community’

William Daroff, CEO of the Conference of Presidents of Major American Jewish Organizations, recalled that Reid always had a warm relationship with the Jewish community, and that his staff was always very responsive and engaged on issues like the U.S.-Israel relationship and the social-service agenda of the Jewish community. Reid also played an essential role in preventing attempts to reduce the charitable-tax deduction.

“He was very helpful, as someone who understood the importance of nonprofits and charities in providing a social safety net for Americans, and from his perch as the Democratic leader, he was very helpful in moving our agenda forward,” said Daroff.

Daroff recalled that in a private conversation, Reid was proud to tell him that he had a mezuzah on the door of his house in Nevada. He was also incredibly proud of his father-in-law, Earl Gould, who was born Israel Goldfarb and immigrated to America from Russia with no more than the clothes on his back.

Reid was “a great friend of the community—someone who really in his kishkes was supportive of Jewish communal causes, supportive of a strong U.S.-Israel relationship and someone who used the levers of power to push forward that agenda,” described Daroff.

In the last months before his retirement, Reid pushed for and got unanimously passed through the Senate the Anti-Semitism Awareness Act, which eventually got blocked in the House of Representatives. Reid continued working on the issue in his retirement and the bill became the basis of the 2019 executive order by President Donald Trump for the U.S. to adopt the IHRA definition of anti-Semitism.

“He was a gentleman’s gentleman,” said Daroff, “someone who really was able to sit across the table from partisan opponents without seeing them as being evil and was from an era that—hopefully, will come back—but from an era where people of goodwill, working together, coming from different ideological points of view, could find a way to find a win-win where everybody leaves the table having something positive that they could run with.”

Bill Dauster, who served as Reid’s deputy chief of staff for policy during his last six years in the Senate, said Reid was a father figure to him.

“He was an incredibly sweet man and very loyal to his staff,” said Dauster. “We all felt about him as family. He was very good to us, and I can remember he took my wife and me out to dinner with Landra and himself.”

Dauster was one of a number of Jews on Reid’s staff, which included chief of staff David Krone as well as foreign policy and senior national security advisor Jessica Lewis.

Reid knew that Dauster studied Torah and would regularly talk to him about the week’s Torah portion. He asked Dauster to send him weekly related questions and some answers, and for the last eight years, Dauster sent Reid a Torah–study question and answer each week.

Reid also asked Dauster to hang a mezuzah on the front door of his apartment.

Being a Mormon Democrat—a relatively small group—Dauster said that Reid knew the challenges of being part of a minority religion. He was always sensitive to making sure to accommodate his Jewish staff members, hosting a menorah-lighting ceremony and asking the Senate chaplain to make sure the prayers would be inclusive for Jewish staffers.

Dauster said he believes that Reid was the most consequential majority leader since former President Lyndon Johnson, listing important legislation passed under Reid’s leadership such as the Affordable Care Act, the Dodd-Frank Wall Street Reform and Consumer Protection Act, and the American Recovery and Reinvestment Act—the latter which Dauster said prevented the United States from going into a second Great Depression.

A procedural expert, Dauster said that for him, the most significant part of Reid’s legacy was making the Senate a more democratic body.

“When [Sen. Mitch] McConnell [R-Ky.] was blocking nominees to the D.C. Court of Appeals, NLRB (National Labor Relations Board), to the Consumer Financial Protection Bureau, we decided to act and to abolish the filibuster for nominations, with the exception of the Supreme Court’s, because some senators like [Sen.] Barbara Boxer [D-Calif.] didn’t want it to go that far. It, of course, has since then,” explained Dauster. “But I think when people look back at the history of the Senate and the long span of the history of the Senate, they will say that Harry Reid was at the forefront of ending the filibuster and making it into more of a democratic majority place.”

On the Iran nuclear deal

One time when Reid found himself at odds with Israel and many Jews was when he supported the Iran nuclear deal.

“Although he was generally a strong supporter of Israel, it was both disappointing and troubling that he supported the catastrophic Iran deal, which not only didn’t allow full inspections of all Iran’s facilities but allowed them to produce nuclear weapons within 13 years,” said Mort Klein, national president of the Zionist Organization of America. “So his supporting this catastrophic deal unfortunately marred his generally pro-Israel record.”

Mellman disagreed that the deal was a blemish on Reid’s pro-Israel record, saying that even some former opponents of the accord now believe that it was better than nothing.

“I had many discussions [with Reid] about Iran and about the Iran deal. He was clear-eyed about the threat that Iran posed to Israel and to the United States,” said Mellman. “The question on his mind was, at the end of the day, was it better to have this agreement or better not to have an agreement. And his view was that Israel’s security was better served by having an agreement than by having no agreement. And we now know that was probably true.”