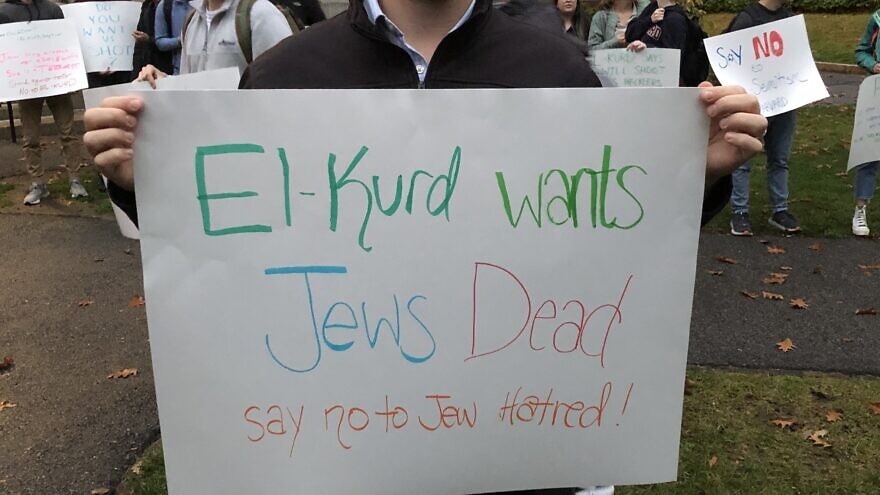 At Harvard University, a poster criticizing the campus appearance by Palestinian activist Mohammed El-Kurd, who has made a series of anti-Semitic comments. Credit: CAMERA.
Spread the word.
Help JNS grow!
Share now:

(October 26, 2022 / JNS) Harvard University and the Massachusetts Institute of Technology recently hosted events with Palestinian activist Mohammed El-Kurd, who has made a series of anti-Semitic comments.

El-Kurd, who appeared at MIT on Oct. 22 and Harvard on Oct. 24, has described Zionism as a “death cult,” “murderous”, “genocidal,” and “sadistic,” according to research compiled by the CAMERA media watchdog. He has also said that Israelis have “an unquenchable thirst for Palestinian blood.”

More than 60 MIT students sent a protest letter to the heads of the departments responsible for inviting El-Kurd.

“As an Israeli, it is incredibly disturbing that numerous departments at MIT would co-sponsor and allocate funds toward hosting speakers who lionize terrorists and whitewash horrific acts of violence against my family, friends, and peers as forms of ‘resistance,’” said MIT student Dana Rubin, in a statement distributed by CAMERA.

Four academics at MIT—Heather Paxon, Lerna Ekmekcioglu, Richard J. Samuels, and Chris Bourg—responded to the students’ concerns by arguing in their own letter thar that “we mean to create a space for discussion and are not endorsing the views of any speaker.”

Harvard student Zachary Lech said, “In refusing to condemn the acts of terrorism perpetrated by Palestinian extremists, and in going out of his way to justify them, [El-Kurd] legitimizes violence against innocent civilians as an acceptable form of political discourse. This is not an honest attempt at debate. El-Kurd stokes hate and brings us away from a solution.”

The MIT event included a second speaker, Amany Khalifa, who has tweeted, “Claiming that Israelis could ever be ‘civilians’ is normalizing the settler nature of the state.”