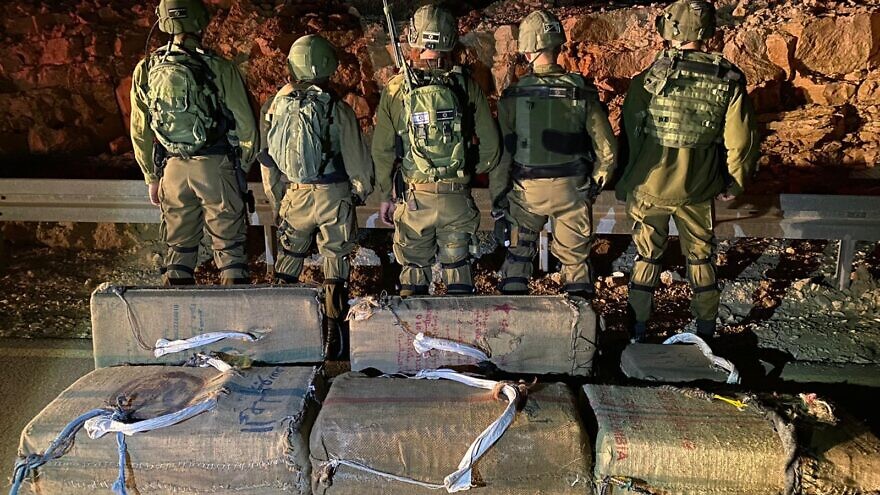 (September 1, 2022 / JNS) The Israel Defense Forces has invested “very high levels of resources” in preventing terrorist attacks in the Jordan border region, an infantry officer has told JNS, adding that a special level of readiness was put into place on Thursday for a safe return to school by the area’s schoolchildren.

Capt. Eyar Hayoun, a company commander in the coed IDF Bardelas Battalion, told JNS about his unit’s nonstop action to secure the Arava Region, which stretches from the Dead Sea to Eilat, against both security threats and a rising tide of attempts to smuggle illegal weapons and narcotics into Israel.

Hayoun said intercepting illegal contraband was a regular feature of his unit’s work along both the Jordanian and Egyptian borders, adding that in recent months, the company intercepted 60 firearms, 16,000 ecstasy pills and ammunition.

“We encounter these attempts around every two months,” said the officer. “We’re not only acting against smuggling, but also against terrorists—some of whom can come from inside of Israel. We’re not only focused on the fence. We are securing communities along Route 90, the Masada site and 13 Dead Sea hotels.”

Whether it is intercepting terrorists or disrupting illegal smuggling attempts that could see terrorists or criminals receive automatic weapons, Hayoun said that in some cases there is prior intelligence, and in other cases, the unit must work without such alerts.

“I look at this like fishing; it requires a lot of patience,” he said. “We will arrive at a sector and scan it. If a terrorist wants to conduct a stabbing attack, we likely won’t know that until it happens. We choose a certain sector and begin activating our [intelligence-collection] means.”

This includes scouts, aerial drones and receiving information from IDF observation posts that are part of the military’s Border Defense Force.

“These enable us to thwart incidents. We don’t work alone as an isolated company. We couldn’t do this without the scouts, the observation officers, the Combat Collection units, the police or the community security coordinators. Our cooperation with the wider supporting envelope is very significant,” he explained.

‘An increase in the number of attempts to smuggle’

Every few days, the IDF Spokesperson’s Unit sends out updates on the kind of operational activity that units like Hayoun’s companies conduct along the Jordanian and Egyptian borders, which, while classified as peaceful, still lure terrorist and criminal elements from the region to try their luck.

On Monday, for example, Israel Border Police forces announced the seizure of 26 handguns in the Jordan Valley area. In recent days, the IDF—together with the Israel Police, Defense Ministry and other agencies—announced that from the start of this year, security forces prevented the smuggling of approximately 300 illegal weapons and 2,150 kilograms of drugs into Israel.

“The smugglings were prevented along the borders with Jordan and Egypt by the soldiers of the 80th Division [which secures the Egyptian and Jordanian borders] and the 417th Jordan Valley Brigade,” said the IDF. “The figures for 2022 so far reflect an increase in the number of attempts to smuggle drugs and weapons into Israeli territory alongside a significant increase in the scope of countermeasures to this trend.”

Security forces view every smuggling attempt as a security threat, and the increase in the quantity of contraband seized reflects the quality of the countermeasures, noted the IDF. So far this year, Israel prevented 40 drug-smuggling operations worth approximately 135 million shekels (about $40 million) in total, the military said, and 18 weapons smuggling attempts at the Jordanian border, resulting in a total of some 300 weapons seized.

In 2020 and 2021 combined, the IDF intercepted 21 smuggling cases and some 300 weapons over two years. In recent months, the 80th Division began implementing the “Defense in Colors” strategy, the military said, which is designed to increase the protection of vital assets and maximize the efficiency of the security forces that are operating in large desert areas by assigning each relevant sector a color that reflects the local threat level and the operational response.

The strategy has led to a record number of thwarted drug and illegal weapons-smuggling attempts in the division’s jurisdiction, said the military. The effort has seen joint situation rooms specializing in smuggling being opened in the IDF’s Central and Southern Commands, in which representatives from the IDF, Israel Police, The Israel Security Agency (Shin Bet) and other bodies create an up-to-date intelligence picture and formulate a joint response to smuggling attempts.

Addressing the coed make-up of his company, Hayoun said: “Everyone has the same uniform, and I expect the same things from my male and female soldiers. All of them are disrupting the smuggling of weapons. In one recent incident, a combat officer arrested the smuggler, after being directed to the scene by a male officer.”

The same demands are in place regarding operations and readiness, said the officer.

‘Ready at every hour and in every sector’

The Bardelas Battalion is the third coed battalion to be formed in the IDF, with the other two being the Caracal and the Lion of the Valley battalions.

Bardelas was founded in August 2015 and began operational activities a year later, according to the IDF’s website. The training of male and female combat soldiers lasts seven months and includes weapons firing, urban warfare and other forms of combat.

Hayoun, who joined the battalion in 2016, said those who serve become accustomed to its coed composition and find it very natural. Some adjustments have to be made, he added, including being aware that there are “some living quarters I can’t enter.”

“We are ready at every hour and in every sector, and we are deployed as maximally as possible,” he said.

While it is always possible to complain about missing equipment or resources, “since the state was founded the approach has been to win with what we have. This is also our approach today,” he emphasized. “We are happy about having the privilege to defend the people of Israel.”